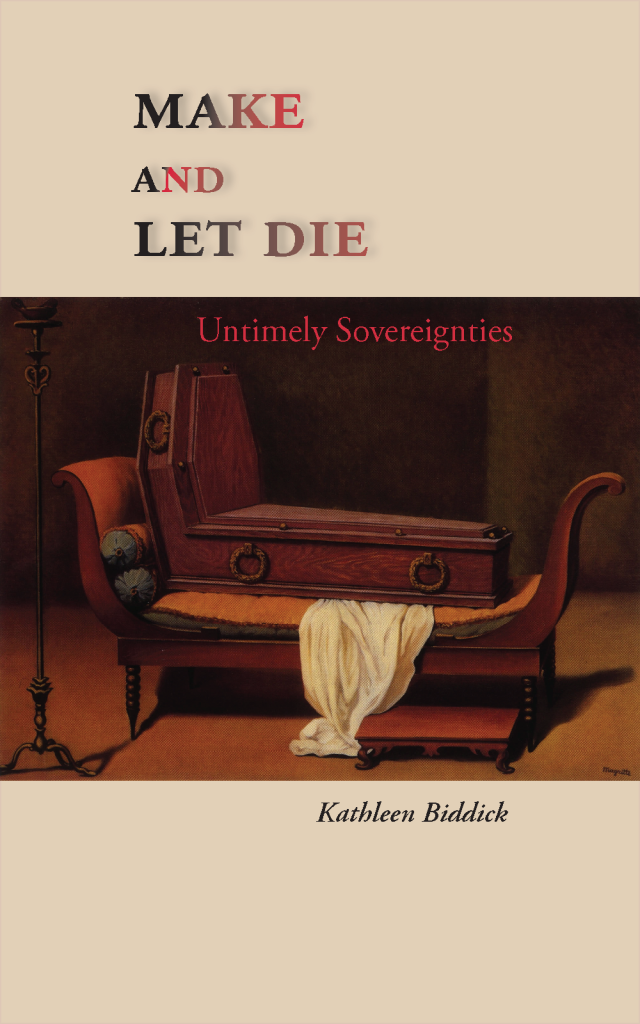 With this formidable reminder that “we have never been secular” (which is to say that, in the “afterlife of political theology,” we have been modern enough), Kathleen Biddick expands the historical and theoretical horizon of our reflections on sovereignty and the biopolitical, opening anew the “medieval archives of violence.” She does so unexpectedly by way of tears and treason (“the stunning and leaky corporeality of treason”), zombies and machines, the (current) prison and “the panopticon’s two bodies,” surveillance and abandonment, the tree of life and the “excarnated” Jews and Muslims of the warfare (and wafer) state. Who better than Biddick could follow with such dexterous refinement the “medieval traces” inscribed in the margins of Benjamin, Kantorowicz, Agamben, and others? Who better than her could lead us through “dead time” and retrieve “the Christian epistemology of typology” that operates still in the ossified periodizations that govern and rule us?

Kathleen Biddick’s new book offers readers a stunning critique of political theology. By recognizing and engaging with all that haunts modern and contemporary accounts of this discourse, Biddick makes vivid the violent medieval archives that remain at the center of contemporary biopolitics. With imagination, a critical eye, and an abiding relationship with the archives of Western Christendom, Biddick makes a poetic case. This should be required reading for any and all who dare to enter the discourses of political theology. These essays are a testament to Biddick’s refusal of the piling up of collateral damage, a shimmer ray of light in this otherwise very dark place.

This collection of essays by one of medieval studies’ most brilliant historians argues that the analysis and critique of biopower, as conventionally defined by Michel Foucault and then widely assumed in much contemporary theory of sovereignty, is a sovereign mode of temporalization caught up in the very time-machine it ostensibly seeks to expose and dismantle.

For Michel Foucault, biopower (epitomized in his maxim “to make live and to let die”) is the defining sign of the modern, and he famously argued that the task of political philosophy was to cut off the head of the classical (premodern) sovereign, the one “who made die and let live.” Entrapped by his supersessionary thinking on the question, Foucault argued that the maxim of “to make live and let die” of modern sovereignty superseded a premodern sovereignty characterized by the contrasting power “to make die and let live.”

The essays collected in Biddick’s book (some reprinted and some published here for the first time) argue that Foucault spoke too soon about the supposed “then” of the classical sovereign and the modern “now,” and this became painfully apparent in his analysis of Nazism in his later lectures, Society Must be Defended. There Foucault groped to articulate an anguishing paradox: How could it be that the Nazis, as the ultimate biopolitical sovereign machine, would insist on an archaic (premodern) mode of sovereignty in their death camps? Here is how he posed the question in that lecture: “How can the power of death, the function of death, be exercised in a political system centered upon biopower?” Foucault left this question hanging.

What Foucault did not ask, and what this collection of essays poses is: how are “to make die” and “to let die” entangled by time, space, matter, and the archival traces of such interactions? Biddick contends that these modes of deathly biopower do not supersede each other as Foucault argued. Make and Let Die: Untimely Sovereignties claims that there is a living death in the “make die” of the so-called classical sovereign and also in the “make live” of the modern biopolitical sovereign. These living deaths are untimely. Only the refusal among contemporary theorists to read the archives of medieval Christendom’s sovereignty (which constituted itself by naming various enemies, most notably Muslims and Jews) has foreclosed even mention of such entanglements. Biddick artfully decrypts the medieval traces of “make live” in “make die,” and also in “let die.” When these dynamic temporal modes of death inhabiting “to make die” and “to let die” are better understood, the static, ahistorical aspects of contemporary biopolitical discourse fall away. Further, this collection of essays, both individually and collectively, argues that in view of the ever intensifying global mobilization of “to make die” and to “let die,” there is something ob/scene, and in need of more critical attention, in the contemporary theoretical embrace of the messianic (as in the work of Walter Benjamin, Giorgio Agamben, Roberto Esposito, and Jacques Derrida).

Preface: Diving into the Crypt: 10 Theses on the Historical Materialism of Biddick (by Eileen A. Joy)

Chap. 2: Transmedieval Mattering and the Untimeliness of the Real Presence

Chap. 3: Arthur’s Two Bodies and the Bare Life of the Archive

Chap. 6: Undeadness and the Tree of Life: Ecological Thought of Sovereignty

Kathleen Biddick is Professor Emerita of History at Temple University. She has authored books in the fields of medieval studies, critical historiography, and theory: The Other Economy: Pastoral Husbandry on a Medieval Estate (California, 1989); The Shock of Medievalism (Duke, 1998); and The Typological Imaginary: Circumcision, Technology and History (Pennsylvania, 2003). She has been the recipient of numerous fellowships and awards: Fulbright Foundation-Ireland, Lily Foundation, Rockefeller Foundation, Stanford Humanities Center, Dartmouth Humanities Center, National Science Foundation and the American Council of Learned Societies Curriculum Development Award. She has lived in Ireland, England, Germany, and Italy in the course of undertaking her scholarly projects. In Spring 2013 she received the Provost’s Award at Temple University for Innovative Teaching.