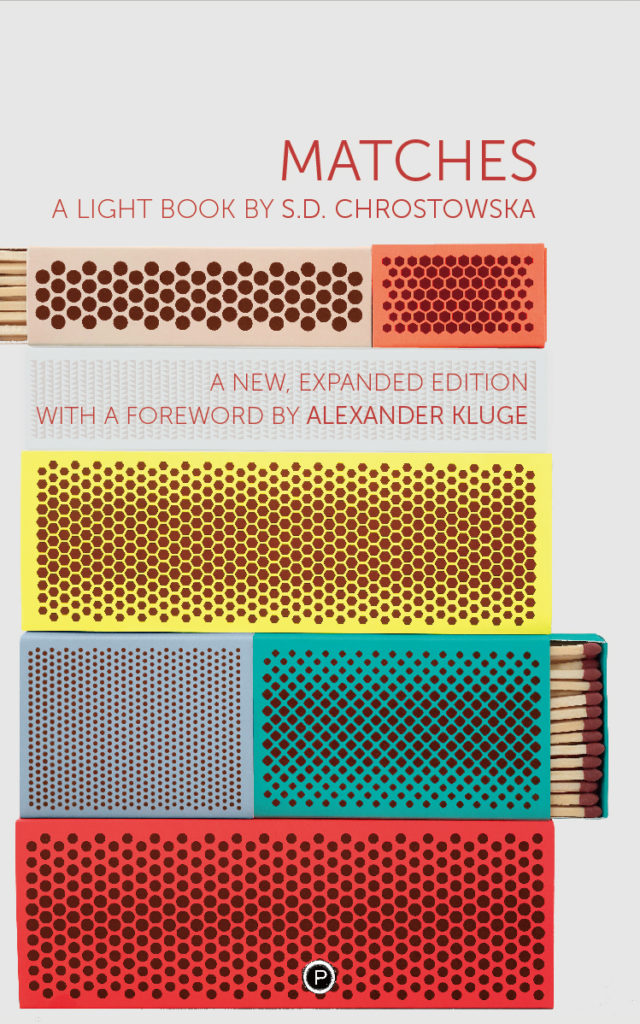 We must imagine a new inflammable “chain of visionaries” formed by the lighters of fuses: the Benjamin of Paris, Capital of the 19th Century, the Foucault of The Archaeology of Knowledge, and now Sylwia Chrostowska and her Matches.

Matches demonstrates that an intelligent, informed critic can use the aphorism and the fragment to explore the most serious and substantive critical and philosophical subjects, providing sufficiently radiant illumination to guide us in our own consideration of these subjects.

Works by leading lights such as Adorno, Benjamin or Kluge, who…know how to play the “advocate of the thirteenth fairy,” she who sees herself excluded by a system limited to twelve place settings,…whose value lies in helping up to freely interrogate our Western decadence before deadly and devastating calamities irremediably call into question our everyday. By virtue of which the author of Matches is at the very least a worthy heir, just as reading this book is vital. Let it be known.

The vision of history illuminating these pages is not the conventional one of progress, but the much more radical one of Rousseauism: a ‘left-wing nostalgia’ that performs a detour through the past—a world anterior to privilege and hypocrisy—with the aim not of restoring it, but of giving it a radically new form.

A new, expanded edition, with a Foreword by Alexander Kluge.

The match: little stick tipped with combustible stuff, sparked by friction; typically comes in a book or a box or a bundle (the point being: never alone). The highly portable match lighting more or less when required was a great nineteenth-century innovation. Before, we had only Danger and Poison matches, and countless match-induced accidents and suicides.

We still have not engineered mischief out of the match. One little lucifer, God’s little helper, lit in the company of its sisters and brothers will, if we let them, afford us a miniature inferno. Are we responsible for the recklessness of thought? There will always be match tricks to go very wrong. How many times have we amused ourselves in the schoolyard, lighting up the whole passel of ideas within our reach, getting us in trouble? And now that we are older, we can strike anywhere. We count on sparks to leap long distances virtually, to pass most swiftly from point to point instead of smouldering. No sooner do we bring a flame to something flammable than it spreads — even as its conductors are already charring and curling up. Let us congratulate ourselves for remaking the transport of ideas. And for this new refrain: What matters is what’s on fire.

Through the prism of criticism, the modalities of thinking form a spectrum: on one end, systematic exposition, on the other, the fragment. It is the latter, fragmentary approach that distinguishes Matches—an investigation that does not focus on a single theme developed in all its aspects but, rather, on a constellation of themes in art, literature, philosophy, science, social and political thought, as well as the human in relation to history and nature.

S.D. Chrostowska pursues here in performative fashion her research into the history of critique from the Enlightenment onward. Her choice of the fragment—in the tradition of writing represented by Gracián, Chamfort, Lichtenberg, and, closer to us, Nietzsche, Adorno, and Benjamin—does not, however, stem from an attempt to comprehend the contemporary world, which can only be done after the fact. Instead, served by an expressive and incisive style, Matches foregrounds the necessary elements for a critique of our time, capturing them in their contradictory and complementary relations. It situates itself under the sign of the future, reviving the spirit of utopia, reminding us that the last word need not belong to the present.

3 thoughts on “MATCHES: A Light Book”