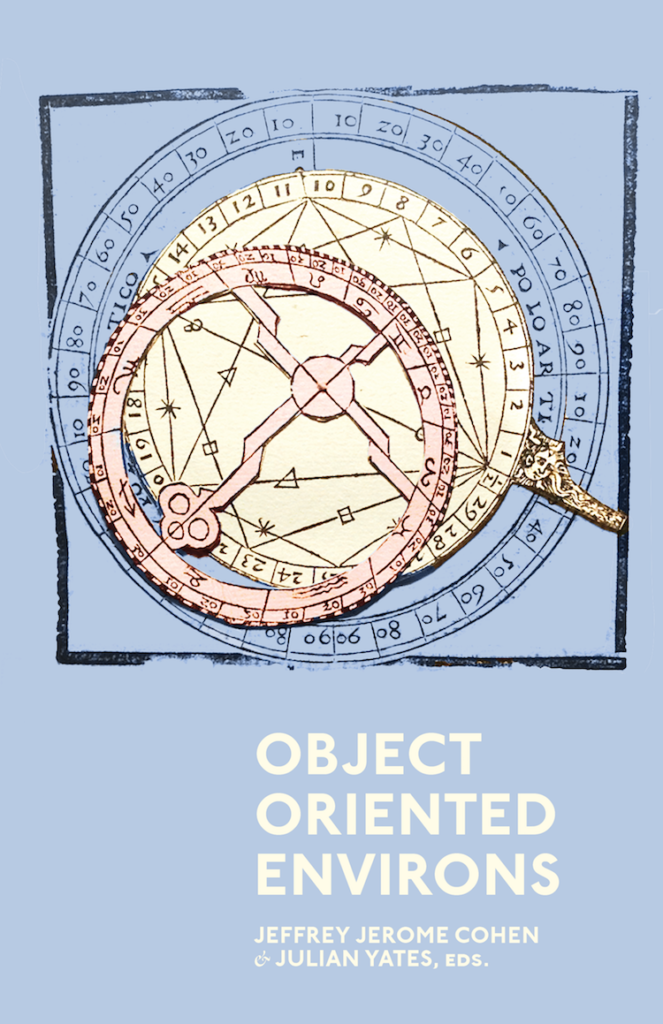 Object Oriented Environs is the lively archive of a critical confluence between the environmental turn so vigorous within early modern studies, and thing theory (object oriented ontology, vibrant materialism, the new materialism and speculative realism). The book unfolds a conversation that attempts to move beyond anthropocentrism and examine nonhumans at every scale, their relations to each other, and the ethics of human enmeshment within an agentic material world. The diverse essays, reflections, images and ephemera collected here offer a laboratory for probing the mystery and potential autonomy of objects, in their alliances and in performance.

The book is the trace of an event-space crafted over a day of conversation in two seminars at the Shakespeare Association of America meeting in 2014 in St. Louis and offers its nineteen essays as the end to the work-cycle of the collective we crafted that day. It is a noisy collation, full of bees, bushes, laundry, crutches, lists, poems, plague vectors, planks, chairs, rain, shoes, meat, body parts, books, and assorted humans (living and dead), and also a repertoire of dance steps, ways of configuring the relations between subject and object, actors or actants (human and otherwise). It is also a book that asks readers to ponder their environs, to consider the particularities of their world, of their reading experiences, and to consider what orders of meaning we might be able to derive from attending closely to all the very many things we come into being with.

Jeffrey Jerome Cohen is Professor of English and Director of Institute for Medieval & Early Modern Studies at George Washington University. He blogs at In The Middle and his most recent book is Stone: An Ecology of the Inhuman (Minnesota, 2015). A full bio may be found at his professional website. His other punctum projects include Animal, Vegetable, Mineral: Ethics and Objects; Inhuman Nature; and Burn After Reading.

Julian Yates is Professor of English and Material Culture Studies at University of Delaware. He is the author of Error, Misuse, Failure: Object Lessons from the English Renaissance (Minnesota, 2003), which was a finalist for the MLA Best First Book Prize; What’s the Worst Thing You Can Do to Shakespeare? (Palgrave Macmillan, 2013), co-authored with Richard Burt; and The Multispecies Impression, forthcoming from University of Minnesota Press.