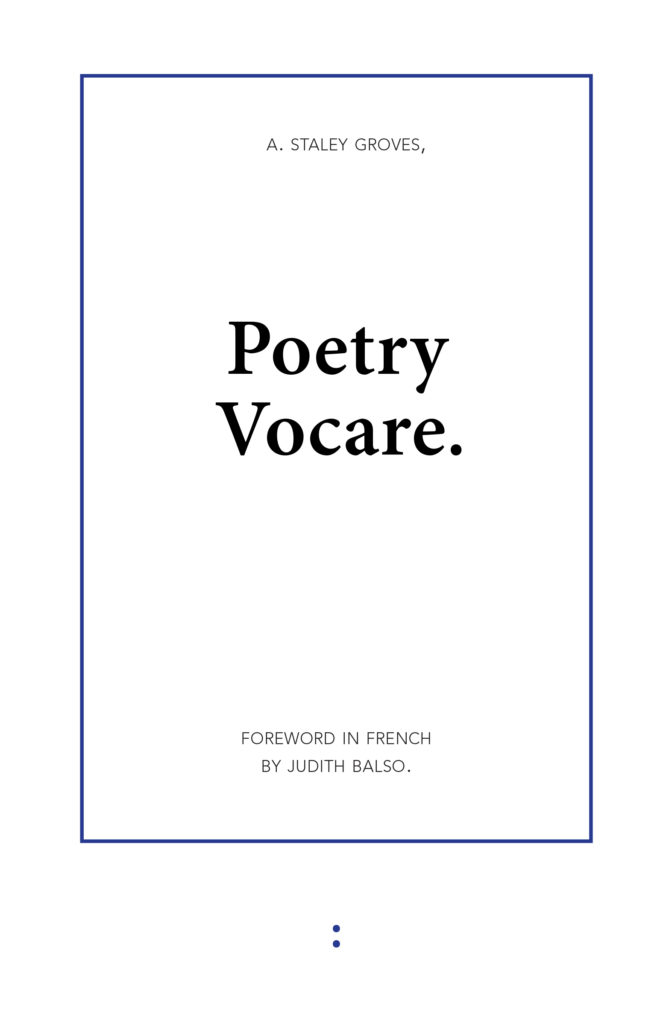 “A. Staley Groves fits in the heroic tradition of poets that have engaged philosophy on its own terrain, the surface of being. It is of utmost importance for the circulation and development of philosophy that these poets exist and continue to challenge the assumptions and axioms of philosophy, especially in times in which nearly the whole field of thought has fallen prey to irrelevant scholastic disputes.”

Poetry Vocare is the first collection of poetry published by young American poet A. Staley Groves. A dense fabric of resemblances and reflections, this work engages with Wallace Stevens, Ossip Mandelstam, and Emily Dickinson. In addition to poems Groves gives a supplement of prose, a short essay titled “Affirmation of Instruction.” Poetry scholar Judith Balso wrote a foreword in French to the work.

A. Staley Groves is a contemporary poet. Originally from the Midwestern United States, Groves now lives in Southeast Asia and is a lecturer at the National University of Singapore. An active musician within the DIY subculture of the 1990s, the craft side of Groves’s poetry is first and foremost devoted to thinking music. This notion was informed through his subsequent study of philosophy and modern poetry with the European Graduate School. The last decade was a development of this notion into a concept, that Poetry, as a written device, reveals to the committed reader the core features of music: sound and rhythm. Through the engagement with written poetry the recovery of sound and rhythm nourishes the denaturation of thought “under the reign of Technik.”