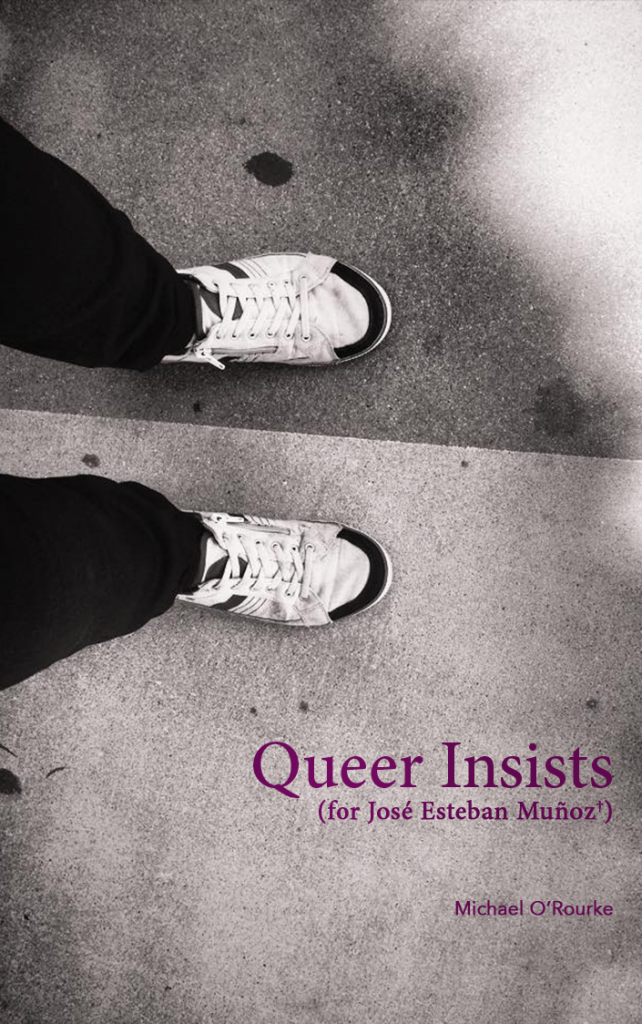 Now that José is lost and found, improperly dispersed in us, it’s our job to bear that, to be borne by that, to keep being reborn in that. So let’s play.

Queer Insists is a memorial essay, a work of mourning, written for the queer theorist and performance scholar José Esteban Muñoz (1967-2013) shortly after his untimely death in December 2013. In a series of fragments, not unlike Roland Barthes’s Mourning Diary, Michael O’Rourke shares memories of Muñoz, the stories and reflections of his friends in the wake of his passing, and readings of his work from Disidentifications to Cruising Utopia and beyond. O’Rourke argues that, for Muñoz, queer does not exist, per se, but rather insists, soliciting us from the future to-come. Muñoz reached towards teleopoietic worlds as he invented a queer theory we have yet to find, but are invited to glimpse.

In reading Muñoz as a Rogue Theorist, this book borrows many of the gifts we have received (and have yet to receive) from him, marking the force and luminescence of his thought, and insisting upon the rare and precious singularity of his work. Muñoz bequeaths to us a queer studies without condition which it is our duty to foster and to bear as we carry it and him into the unknowable futures of an indiscipline.

Michael O’Rourke lives in Dublin, Ireland and is a secret agent of punctum’s Acquisitions Office. He has published extensively in the areas of Queer Theory, Deconstruction, Speculative Realism, Object Oriented Ontology, Psychoanalysis, Gender and Sexuality Studies, and Feminist Theory. A collection of his essays entitled Rogue Theory is forever forthcoming from punctum books.

One thought on “Queer Insists (for José Esteban Muñoz)”