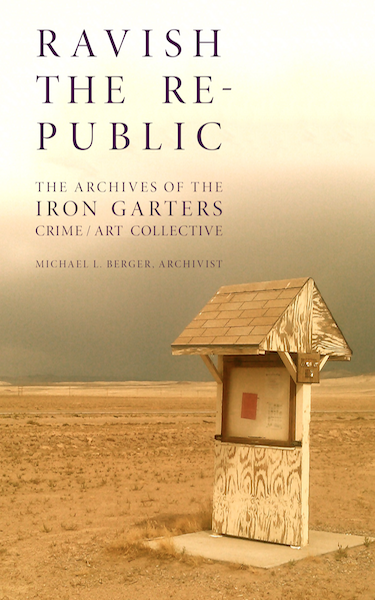 In the 2011 book Dark Matter: Art and Politics in the Age of Enterprise Culture, the artist Gregory Sholette posits that we are living in an era of surplus creative energies concentrated in a teeming archive of artists, the poor, the “unskilled” and the “economically invisible.” It is a potentially disruptive archive that capitalism can’t always manage but can still hope to eventually exploit and assimilate. Within this archive seethes creative energy that can extend itself in unique and unsettling ways, across multiple categories and disciplines. Often, however such energy is captured by the winners and arbiters in our “risk society” and thereby sanitized and neutralized. So it becomes necessary for artists, theorists, writers and activists to be versatile in their tactics, cryptic and evasive in their manifestations and criminally implacable in their visions.

The Iron Garters are an “art gang” that masquerades, disseminates and performs as your archetypal “criminals,” “outcasts” “mystics,” “losers” and “lunatics”: in short, a vital and necessary social surplus. Their antics have been traced back to Jean Genet’s novel The Thief’s Journal, the films of Kenneth Anger, as well as the Dada poems of Baroness Elsa and Hugo Ball. Yet still other Garters have been nourished on the Vienna Actionists, Genesis P-Orridge, Diamanda Galas, Gilles Deleuze, Samuel Delany, and the dulcet sounds of The Cramps. With a critical and aesthetic arsenal salvaged from underground “kulchurs” and academia’s collective libido, the Iron Garters are not afraid to demand excitement along with analysis, frenzy coupled to resistance, and fashion inseparable from infiltration. Founded in San Francisco on a full moon night after a “deathpunk” show, the original members grew adversely impacted by the economic invasions reducing a once great city to a tepid monoculture. Fueled by queer, antinomian, heretical and radical traditions, the Garters pilgrimaged into various trans-continental sanctuaries and beachheads, leaving behind them radiant paper trails of provocation and sedition. This volume is one such radiant paper trail.

Despite its many hiatuses, the Garters archive has grown more fertile, thanks in part to its endurance in imaginary/speculative realms. Currently, the Garters are remobilizing as a “crime art collective,” with cells operating in cities most in need of “crime-art,” while also re-asserting itself as an ongoing “transmedia” project. This present archive is a small fraction of the decade’s worth of Garter experiments, epistles, stories and communiqués. In a political epoch when risk and anxiety seem to predicate our every move, and when being poor, different, “unskilled” or “a failure” (as judged by the demigods of Profit, Fear, Reason & Security) means that you are essentially criminalized, then it becomes imperative for art (wedded to theory and style) to celebrate its own “criminal,” “dangerous” and “unassimiliable” nature. So let the Garters initiate you into the mysteries that are already yours, once you rid yourself of fear, anxiety and the need to be respectable.

Conceived in 2004 as a gritty mail art project called TresPassions Unlimited, the Iron Garters were established as a full-fledged “art gang” in the Bernal Heights area of San Francisco in 2010. Then almost instantly they vanished yet not before secreting reams of strange, tantalizing and vitriolic propaganda. Today, the Garters have reformed into several cells: a mail network, an inflammatory writing collective, a gaggle of art-activist instigators and a semi-fictional band of heathen outlaws. All of these groups unite and mobilize under the mantle, The Iron Garters Crime/Art Collective. Prospective members should inquire for initiatory matters at: thesaltedlash@gmail.com. 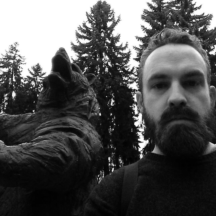 Michael Berger is a writer and teacher living in Las Vegas, Nevada. He is the editor of the magazine, The Salted Lash, which is affiliated with The Iron Garters Crime Art Collective. He managed a bookstore in San Francisco for a couple years while writing for The Rumpus magazine. His other work can be found at Pank, Word Riot, Dogwood, The Bolt and various zines and pamphlets in the Bay Area.