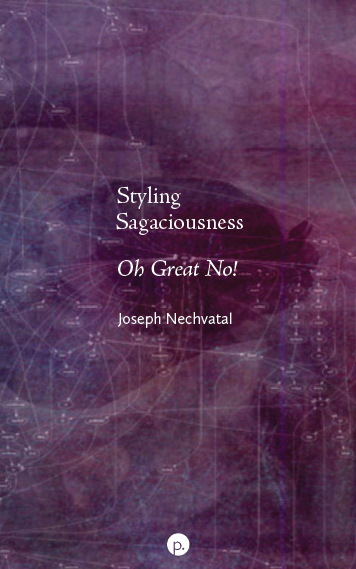 During the Paris pandemic confinement period of 2020, with the dread of viral death in the air, artist Joseph Nechvatal finished his second book of poetry called Styling Sagaciousness: Oh Great No!.

The mythopoeic mélange of Styling Sagaciousness is intended as a complicated forensic fairy-tale, suitable for Noh theater, which keeps slipping in and out of idiosyncratic narration, a ghostly appearance-disappearance act that turns on the nub of our narcissism concerning our death, that strange, incurable and deeply irrational affliction we all share. Putting identity aside, this book tests the limits of form and stretches the bounds of meaning by recasting our experiences of encountering our self as the sumptuous physicality of total negation. As such, Styling Sagaciousness delivers to us all an airy irrational punch of needed nonsensical negation by tying together insouciant informality with a visceral camp irony: at turns hip and flamboyant and morally outrageous.

This seven-part death farce epic poem follows up Nechvatal’s sex farce epic poem Destroyer of Naivetés, which was released in book form in 2015 by punctum books. Nechvatal intends these two books (with complimentary cover images of his painting penelOpe in agOny (2014)) to be the sum total of his mature poetic output; addressing first Eros, and then, with Styling Sagaciousness, Thanatos.

Joseph Nechvatal is an American artist currently living in Paris. His post-conceptual art practice engages in the fragile wedding of image production and image resistance. Through his version of an art-of-noise, he brings a subversive reading of society through his use of custom a-life computational viruses. His computer-robotic assisted paintings and software animations are shown regularly. Nechvatal earned his Ph.D. in the philosophy of art and new technology at The Centre for Advanced Inquiry in the Interactive Arts (CAiiA) at the University of Wales, Newport. From 1999 to 2014 he taught in the mfa graduate department at the School of Visual Arts. His book of essays Towards an Immersive Intelligence: Essays on the Work of Art in the Age of Computer Technology and Virtual Reality (1993–2006) was published by Edgewise Press in 2009. In 2011 his book Immersion into Noise was published by the University of Michigan Library’s Scholarly Publishing Office in conjunction with the Open Humanities Press. He has also already published two books with punctum books: Minóy (ed.) (2014) & Destroyer of Naivetés (2015). In 2021 a cassette of his Selected Sound Works (1981–2021) was published by Pentiments experimental music and sound art label.