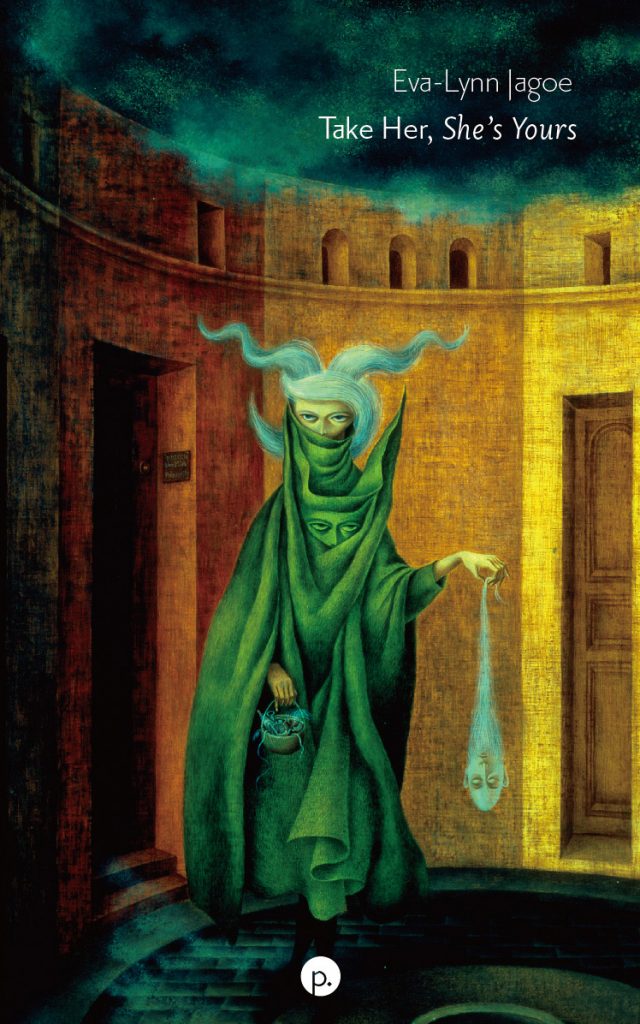 “Take Her, She’s Yours transforms the developmental conventions of memoir into a document of unlearning defenses—such as the pseudo-openness of an enthralling sexual compulsion. Concepts of desire taken fromliterature and critical theory tangle with vivid flesh histories as Jagoe leaps out of her life and onto the cliff of an analyst’s chair, which she leaves for a beach at the end. Readers looking for a way to think differently about changing the shape of their love will find great interest here.” ~ Lauren Berlant, George M. Pullman Distinguished Service Professor, University of Chicago

“‘Having an unconscious is not a moral failing.’ In this remarkably lucid account, Eva-Lynn Jagoe represents the oblique, indirect, processual, uncertain work of her psychoanalysis that gives her the words she needs to understand what had been so long opaque. After a lifetime of giving herself away so as not to be taken, she can at last say what she wants. The analytic work, apparently inchoate and directionless, takes her where she needs to go.” ~ Christina Crosby, Professor, Feminist, Gender, and Sexuality Studies, Wesleyan University.

We say, you belong to me, or I belong to you. But is it possible to be possessed by others? And can we ever possess ourselves? In this raw and intimate account, Eva-Lynn Jagoe merges memoir with critical theory as she recounts the unraveling of everything she thought she knew about selfhood, relationships, and desire. Through the story of an upbringing in a patriarchal Spanish and American household, a dissociative and painful relationship towards men and power, and a chaotic marriage and divorce, she interrogates the destructive fantasy of possessive individualism that permeates our psyches and our cultural expectations. Woven through this narrative is an account of the unique relationship that Jagoe has with her psychoanalyst, in which she works through her tendency to give herself away to others, and learns to navigate the many contradictory selves that we all hold within us. This journey leads her to an enriched understanding of self-possession. Jagoe’s account of an examined life is inseparable from her commitment to the psychoanalytic, feminist, and queer theories that sustain and nourish her in her search for an expanded definition of self.

Jagoe’s unique blend of musings and reflections on literature, fairy tale, and culture; her willingness to delve into abjection and contradictory desires; and her honest portrayal of the realities of psychoanalysis allow for a timely exploration of gender, sex, and power. Take Her, She’s Yours belongs in the company of Eve Kosofsky Sedgwick’s A Dialogue on Love and the memoirs of Maggie Nelson, Rachel Cusk, and Lidia Yuknavitch. It engrossingly conveys the lived urgency of critical thinking and the pleasures and perils of embodied selfhood. Take Her, She’s Yours is a story about loss and letting go, but also about the intimacy that emerges through an expanded definition of selfhood.

Eva-Lynn Jagoe is the author of The End of the World as They Knew It: Writing Experiences of the Argentine South. Her essays, articles, and stories have appeared in Bluestem Literary Magazine, Discourse, Fables for the 21st Century, Guts Canadian Feminist Magazine, Public, and Writing From Below, as well as numerous academic journals. She is a professor at University of Toronto, where she teaches critical and cultural theory, environmental humanities, Latin American studies, film, and literature. She is the co-organizer of Banff Research in Culture, and The Toronto Writing Workshop. She is also a certified Iyengar yoga teacher.