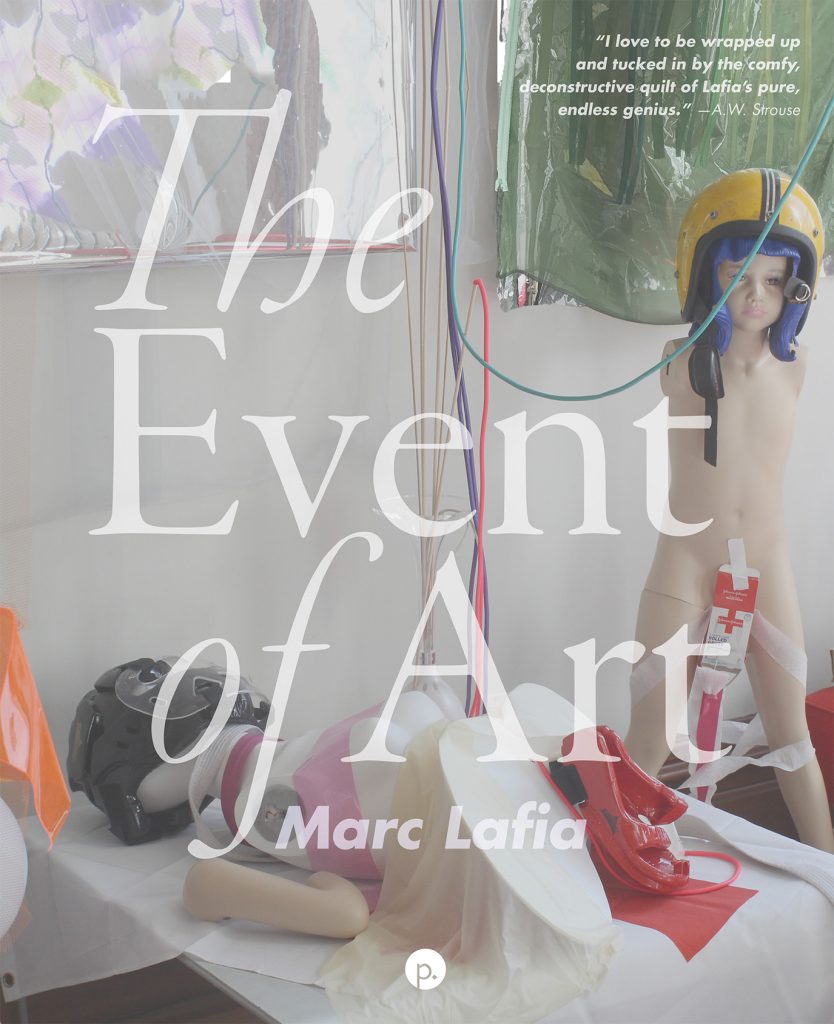 “Marc Lafia lives in fidelity to creation; in the working of artwork. The Event of Art is a festival of theory and is also our way into the bacchanalia of Marc Lafia. Simultaneity, deterritorialization, excess and chance are key concepts explored and performed by the book. Endless emergence of becoming in Lafia’s multifocal installations and investigations seek not to privilege one point of view over another and continue poly-discourse onto the book’s pages. This multiplicity helps deterritorialize the self from static definitions, relocating it in thereness and hereness, nearness and distance, present and future. His adventures, teaching, art and analysis drum at a lusty pace, delightfully distressing the seams of language and coherence. And chance, as a procedure—an intention that puts aside determination or willfulness and awaits the happening—is also the book’s style of organization. Its relocating selves are on every page mid-conversation with another page and in so reading, participating, persisting through the book, the reader becomes multiple, simultaneous, deterritorialized, relocated, gluttonous, frolicsome, asking, How do we get this book into the hands of everyone who cares about art? Or in other words, Let them eat Marc Lafia!”

“Wise beyond this mortal life, Marc Lafia is, for me, one of the true sages, someone whose cosmic vision throws me, joyfully, into a wild conversation with the mystical unconscious—into the whirling, chatty feedback loop of Lafia’s slipstream, which rushes headlong into this weary world in order to distend soulfully over the broken bits, hugging them together and weaving (breathlessly) a brainy, beautiful flow that makes me, finally, feel so snug and warm and cozy. I love to be wrapped up and tucked in by the comfy, deconstructive quilt of Lafia’s pure, endless genius.”

The Event of Art presents, in fifty-two modular chapters and over eight hundred pages and images, the works of artist Marc Lafia. The book interweaves essays, notes, photographic archives, and a host of exhibitions wherein Lafia traverses his wide body of work and examines how his early strategies of cultural reading of photography and film, of interface, network culture, and social media, transform into an investigation of materiality itself. If his interest was once the way media becomes the message, his interest later becomes the realm of the sensible and the sensate in themselves. Here he presents art as the medium itself, giving us wide permission to explore and examine our deepest feelings and senses, our world and its becoming.

The book is introduced by two essays. The first is by curator and art dealer Mathieu Borysevicz, where he recounts meeting Lafia at his first artist residency, and the many projects they would go on to do together. He introduces Lafia’s interest in recording as it becomes digital and computational where “recording is not only memory, and a data structure, but a permutational instrument and ever-changing horizon of iterations.” The other introductory essay is by critic Daniel Coffeen, who writes, “while Lafia may not have a traditional medium – there is no such thing anymore – he does in fact have one consistent medium: imaging making itself, its apparati of creation, consumption, and circulation. In fact Lafia’s medium is the discourse of art – what it is, how it comes to be, how we experience it.”

The Event of Art presents the work of art as a complex material and societal event. The event is multiple, a continual becoming of perception, being, materiality, participation, a coming to the senses and the making, shaping and opening to them, not only of one’s self, but the world becoming.

Marc Lafia is an American artist and filmmaker whose work emerges with network culture as it also changes our relationship to knowledge, ourselves, our memories, and our bodies, from one of representation to presentation, and from contemplation to new modes of embodiment, producing new subjectivities and new ways of going in the world. He has been exhibited at the Walker Art Center, the Whitney Museum of American Art, the Tate Online, the ZKM, the Centre Pompidou, Anthology Film Archives, International Film Festival Rotterdam, The Minsheng Museum of Art in Shanghai, and The Shenzhen Sculpture Biennale 2014, among other venues. He has taught at Stanford University, the San Francisco Art Institute, Art Center College of Design in Pasadena, Pratt Institute, and Columbia University. His books Image Photograph (2015) and Everyday Cinema (2017) were published by punctum.