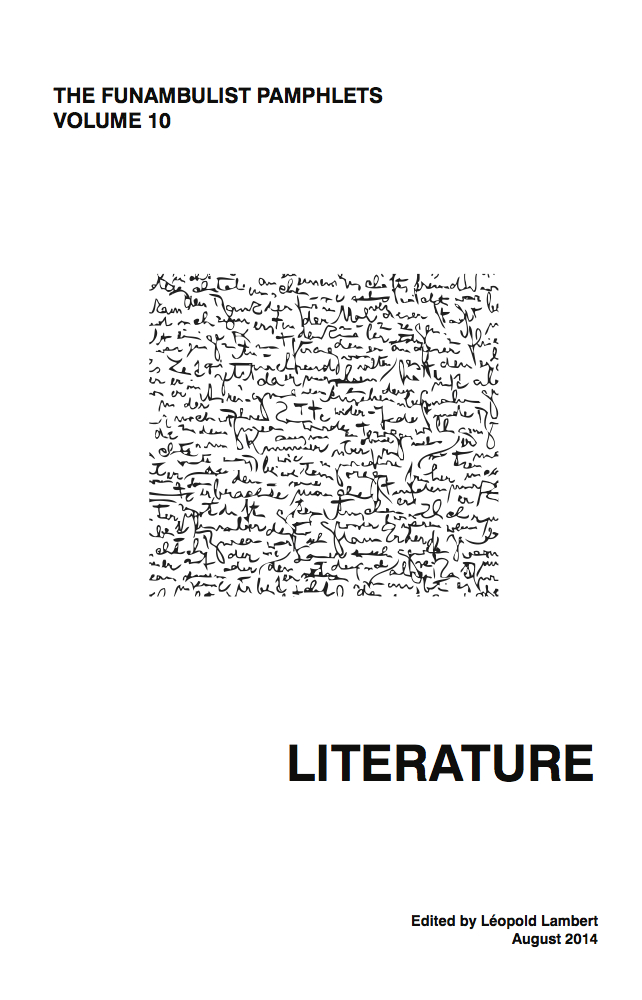 Just like Foucault, William S. Burroughs does not think that we can think and act outside of the society of control. However, he dreams — not in the utopian meaning but almost in a literal meaning —  of a world that would constantly challenge the intrinsic logics of the mechanisms of control. He describes this world in Naked Lunch and he names it: The Interzone.

Volume 10 is devoted to the topic of Literature, with entries by Lambert and other authors. The idea that architecture can be created through narrative is popular in some academic circles. It seems a fruitful approach to the discipline as it unfolds an important imaginative field. It also envisions a resistance to forms of architectural teleology, since fiction is usually based on the disfunction of the environment in which it is set. For this reason, we could go as far as to affirm that fiction operates in contradiction to the traditional design method. The word “literature,” however, is not often pronounced by the people who seem to promote this creative method. The following texts intend to think of literature as a powerful field of ideas that translates to other creative disciplines. This translation should never be literal, and for this reason, some fictions that evoke architecture — Franz Kafka’s and Jorge Luis Borges’s labyrinths, for example — might be paradoxically more difficult to properly translate than less immediately spatial novels. The following texts do not propose any translation of their own but rather offer a humble toolbox in order to do so. This volume also constitutes an opportunity to archive the four texts written for the first event of Archipelagos (Brooklyn, November 2011), an non-institutionalized gathering of people conversing around a given topic. The first event was dedicated to literature and four architects were invited to talk about four authors they chose (Kerouac, Artaud, Dostoevsky and Pessoa) in the first half of the event, while the second half consisted of an open conversation generated by the presentations.

Vol. 10_Literature includes: Introduction: Architectural Narratives — By Revealing the Existence of Other Worlds, the Book is a Subversive Artifact — Jack Kerouac: The Rooms, the Dioramas, the Maps (by Sofia Krimizi) — Fernando Pessoa: Heteronyms (by Carla Leitão) — Fyodor Dostoyevsky: The Tyranny of Logic, the Voice of Blood, and Inner Disharmony (by Martin Byrne) — Antonin Artaud: Sacred Matter — Van Gogh: The Man Suicided by Society (by Antonin Artaud) — “My Desire is Someone Else’s Fiction” — Short Approach to the Notion of Commodity for William Burroughs and Karl Marx — William Burroughs’s Interzone: The Space of the Suspended Law Contained in the Thickness of the Line — Coriolanus and the State of Exception — Destructive Beauty: The Stendhal/Mizoguchi Syndrome as Seen by Yukio Mishima — The Faustian Pact of the Artist: Hell Screen (by Ryunosuku Akutagawa) — Desexualizing Sade: Relations of Absolute Power on the Bodies from Sodom to Abu Grhaib — The Precise Design of Torture in Kafka’s Penal Colony — Minor Literature — The Kafkaian Immanent Labyrinth as a Postmortem Dream — Computational Labyrinth or Towards a Borgesian Architecture — The Two Architectures of the Infinite Possible Worlds: Leibniz’s Pyramid & Borges’ Garden of Forking Paths — George Orwell: The Post-Ideological Man — Tower of Joy, Ulan Bator, April 1992