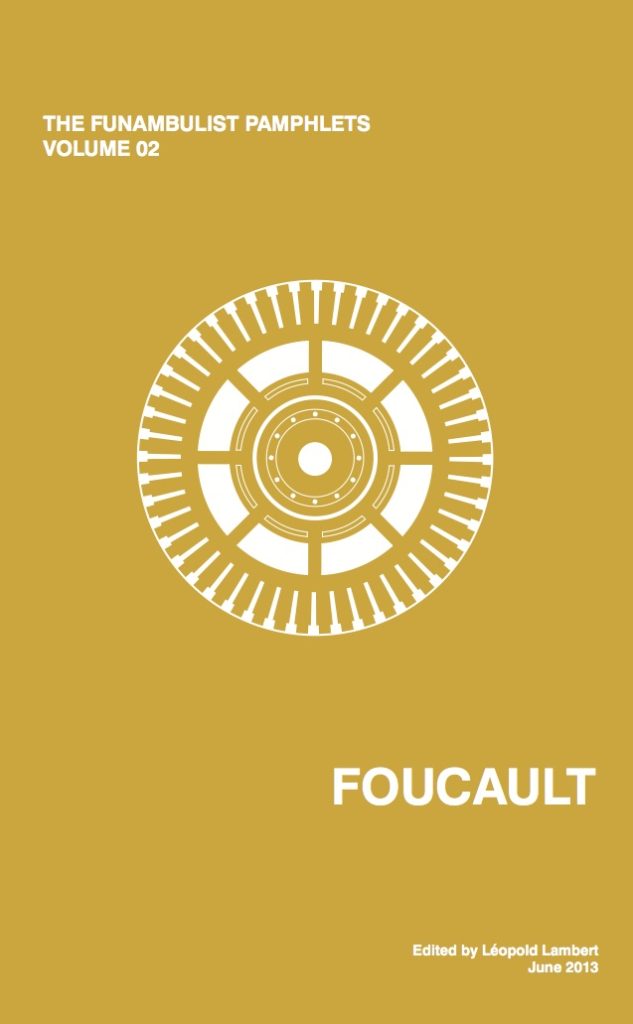 … resistance has to be produced, hidden in the folds of the map, in spaces that two-dimensionality fails to describe. We need to use architecture against architecture.

Volume 02_Foucault includes: Foucault and Architecture: The Encounter that Never Was — The Architectural Underestimation — “Do Not Become Enamored with Power” — “Mon Corps, Topie Impitoyable” — The Cartography of Power — The Political Technology of the Body — Architecture and Discipline: The Hospital — Questioning Heterotopology — Foucault and the Society of Control — Quadrillage: Urban Plague Quarantine & Retro-Medieval Boston — The Inscription of Gender in Our Bodies: Norm Production in Foucault and Butler — Modes of Subversion Against the Pharmacopornographic Society: Testo Junkie by Beatriz Preciado — “My Desire is Someone Else’s Fiction” — The Architectural Paradigm of the Society of Control: The Immanent Panopticon — The Counter-Biopolitical Bioscleave Experiment: Bioscleave, Shaping our Biological Niches (by Stanley Shostak) — Diagrams of Utopia (by Anthony Vidler) — Quarantine and Remoteness: Paranoia and Mechanisms of Precautionary Incarceration — Prison Information Group: Michel Foucault, Jean-Marie Domenach & Pierre Vidal-Naquet