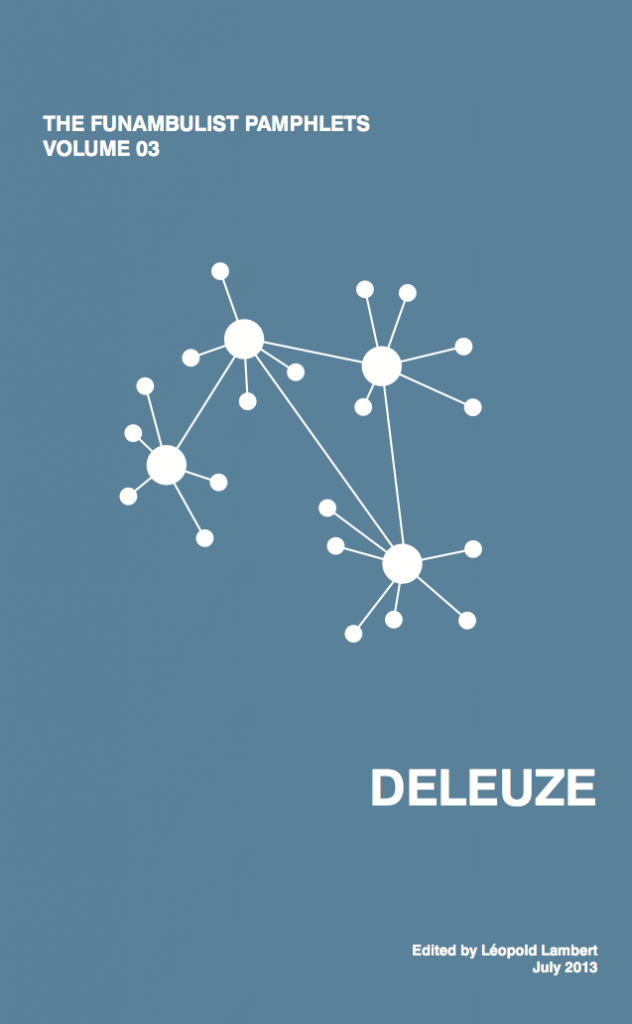 Whether we attempt to be minor architects, digging in the subterranean matter of our system, or funambulists, walking with agility on the powerful lines that striate the world, our approach is the same: to recognize, analyze, and articulate the physical and political forces that are inherent to architecture. Another reason to fight in favor of the ‘minor’ consists in the fact that the ‘major’ exists only as an ideology. The failure of modernism is a good illustration. Modernism invented a body that was supposed to be the normative body when, actually, it was an ideal body. Nothing is stranger than a body that is both normative and ideal; it is nevertheless the condition of the majority. The absolute standard of a given dominant power cannot be embodied by a single person, and therefore all can be involved in what Deleuze calls processes of becoming, in order to embrace this minor identity, and thus act through it.

Volume 03_Deleuze includes: Minor Architects and Funambulists: A Shared Architectural Manifesto — Abécédaire — What Is It to Be “From the Left” — The Ritournelle (refrain) as a Territorial Song Invoking the Power of the Cosmos — The Body as a Desiring Machine — Minor Literature — What Remains from Francis Bacon — Transpierce the Mountains: Indian Medieval Art History (by Élie Faure) — Processes of Smoothing and Striation of Space in Urban Warfare — A Thousand Machines (by Gerald Raunig) — Foucault and the Society of Control — Control and Becoming: A Conversation Between Negri and Deleuze — “I Leave it to You to Find Your Own Instrument of Combat”: Deleuze Quotes Proust — “A Sunflower Seed Lost in a Wall is Capable of Shattering that Wall” — Deleuze’s Wave: About Spinoza — Power (Potentia) vs. Power (Potestas): The Story of a Joyful Typhoon — The World of Affects or Why Adam Got Poisoned by the Apple — The Spinozist “Scream”: What Can a Body Do? — “Comment disposer mes tribus? Le délire est géographico-politique” — The Hypochondriac Body — A Short Political Reading of Leibniz’s Small Sensations — The Infinite Worlds Folded in the Dresses of Yiqing Yin — The Two Architectures of the Infinite Possible Worlds: Leibniz’s Pyramid & Borges’s Garden of Forking Paths — Lecture by Gilles Deleuze About the Act of Creation (May 1987)