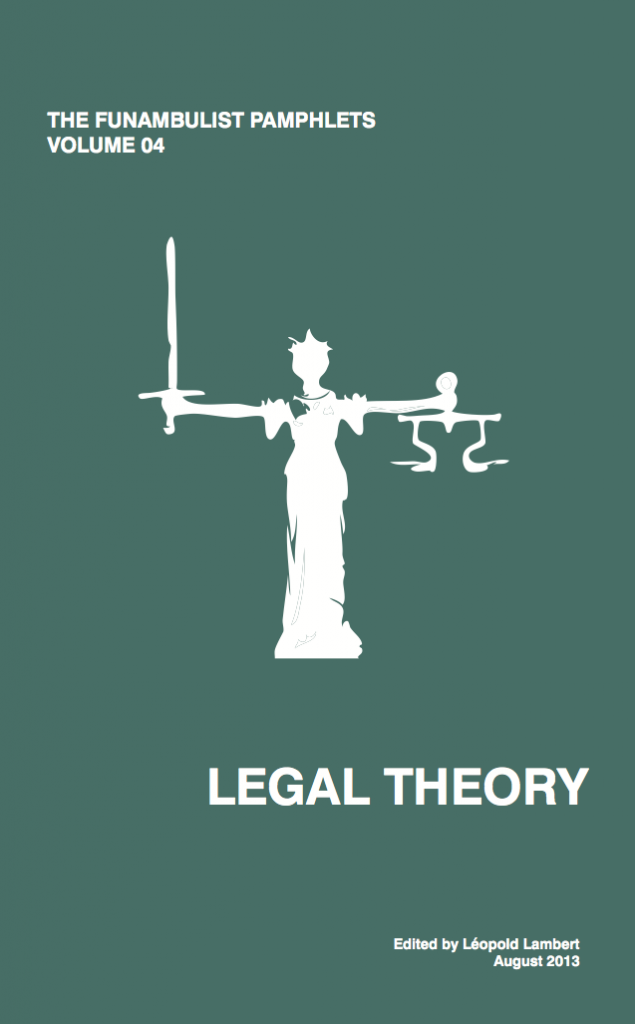 Prisons are the extreme example of how architecture embodies the law. We are nevertheless surrounded by more domestic cases of architectural enforcement of the law. During a curfew or quarantine, your own house, supposedly so neutral and innocent, can become your own prison. But was this house so innocent to start with? Isn’t the house the material embodiment of a law that integrates private property as one of its components? How can we enforce property in a better way than to build impermeable walls on the lines that the law abstractly constructed?

The Funambulist Pamphlets is a series of small books archiving articles published on The Funambulist, collected according to specific themes. These volumes propose a different articulation of texts than the usual chronological one. The eleven volumes are respectively dedicated to Spinoza, Foucault, Deleuze, Legal Theory, Occupy Wall Street, Palestine, Cruel Designs, Arakawa + Madeline Gins, Science Fiction, Literature, and Cinema. See the rest of the volumes HERE.

Volume 04_Legal Theory includes: Architecture and the Law: An Epistolary Exchange With Dr. Lucy Finchett-Maddock — Remus Has to Die — Trapped in the Border’s Thickness — Absurdity and Greatness of the Law: The Siege of the Ecuadorian Embassy in London — The Space Beyond the Walls: Defensive “A-legal” Sanctuaries — The Reasons for Disobeying a Law — Political Geography of the Gaza Strip: A Territory of Experiments for the State of Israel — Palestine: What Does the International Legislation Say? — In Praise of the Essence of the American Second Amendment: The Importance of Self-Contradiction in a System — Power, Violence, Law (by Costas Douzinas) — Fortress London: Missiles on Your Roof — Short Digression About the Future of Drones (After Seeing One at JFK) — Quadrillage: Urban Plague Quarantine & Retro-Medieval Boston — Historical Map of Quarantine — Collision, Sexuality and Resistance — The Spatial Issues at Stake in Occupy Wall Street: Considering the Privately Owned Public Spaces — Strategies for Subversive Urban Occupation (by Recetas Urbanas) — Is Housing a Human Right? Considering the “Take Back the Land” Manifesto — Center for Urban Pedagogy

One thought on “The Funambulist Pamphlets 4: Legal Theory”