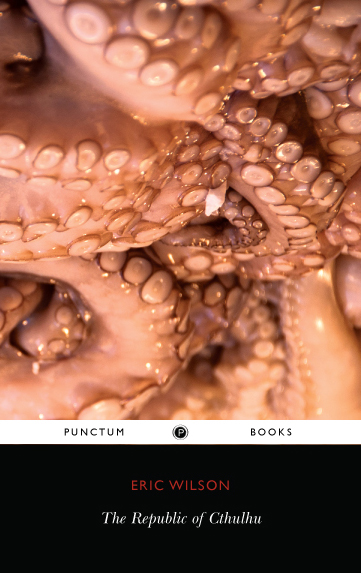 An intriguing contribution to the growing literature on Lovecraft. It is also one of the few interpretations to draw political — or rather, ‘parapolitical’ — implications from the master of cosmic horror.

If parapolitics, a branch of radical criminology that studies the interactions between public entities and clandestine agencies, is to develop as an academic discipline, then it must develop a coherent theory of aesthetics in order to successfully perform its primary function: to render perceptible extra-judicial phenomena that have hitherto resisted formal classification.

Wilson offers the work of H.P. Lovecraft (1890–1937) as an example of the relevance of subversive literature—in this case, cosmic horror and the weird tale—to the parapolitical criminologist. Cosmic horror is a form of writing that relies heavily upon the epistemological assumption of a radical and irreconcilable disjunction between appearance and reality, perception and truth. In many ways, the well-constructed weird tale strongly resembles the hard-boiled detective story or the noir thriller in that the resolution of the narrative hinges upon a dramatically shattering confrontation with an unspeakable reality. Apart from its obvious utilization of conspiracy theory, the primary attraction of the Lovecraftian text lies with its remarkably sophisticated utilization of two central tropes of classical aesthetic theory—the sublime and the grotesque. Not only does Lovecraft’s oeuvre represent a remarkable use of both of these motifs, but the raw literary power of the Lovecraftian weird tale serves as an outstanding exemplar for the parapolitical scholar to emulate in formulating an alternative mode of discourse, or poetics.

Eric Wilson is a senior lecturer of law at Monash University, Melbourne, Australia. In 1991 he completed his Doctorate in the history of early modern Europe under the supervision of Robert Scribner, Clare College, Cambridge. In 2005 he received the degree of Doctor of Juridical Science (S.J.D.) from the University of Melbourne. He is the author of The Savage Republic: De Indis of Hugo Grotius, Republicanism, and Dutch Hegemony in the Early Modern World System (c. 1600–1619), published by Martinus Nijhoff in 2008. He is the editor of a series of works on critical criminology, the first volume of which was published by Pluto Press in 2009 as Government of the Shadows: Parapolitics and Criminal Sovereignty. The second volume in the series, The Dual State: Parapolitics, Carl Schmitt and the National Security State Complex, was published by Ashgate in late 2012. In March 2015 he published his second monograph, The Spectacle of the False Flag: Parapolitics from JFK to Watergate (punctum books) which discusses the myriad linkages between covert intelligence and organized crime during the period of the Vietnam War. He is currently preparing a series of articles on Rene Girard and critical jurisprudence. His research interests include Law and Literature, the comparative law of Southeast Asia, critical jurisprudence, the history and philosophy of international law, and critical criminology.

One thought on “The Republic of Cthulhu: Lovecraft, the Weird Tale, and Conspiracy Theory”