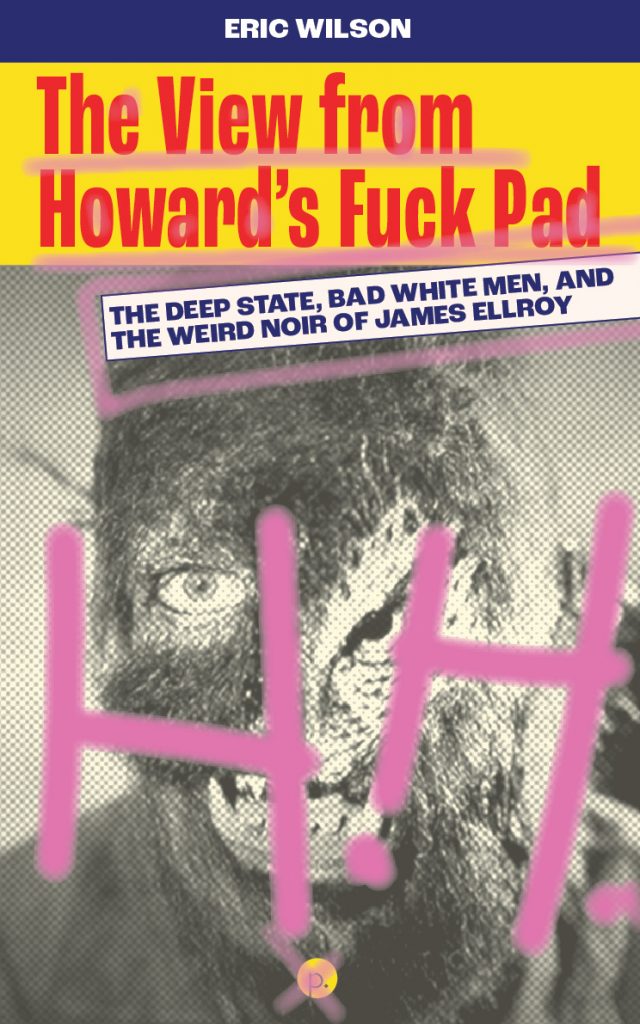 Just like he collected airplanes, Hughes obsessively collected women, stashing them in the more than one hundred apartments, hotel rooms, and houses he owned around Hollywood.

Eric Wilson’s The View from Howard’s Fuck Pad is for those who have been cold-cocked by the wonder and occluded knowledge of the clandestine wars of sights and sounds that infuses the aethereal battles of the post-enlightenment politics of pure affectivity that, in their border-crossing and shapeless anti-totalities, make up the non-place where we all un-live today — The Big Nowhere.

Hand-jobbing the chthonic-cum-spelunking texts of the Demon-Dog of post-humanist crime writing, “James” Lee Earle Ellroy, and aided and abetted by a posse of hermeneutical henchmen — Frantz Fanon, Paul Virilio, René Girard, Carl Schmitt, and Max (“The Brow”) Stirner — Wilson’s book aims for nothing less than the Big Take-Down of the Big Combo of the American colonial-settler polity known as The Frontier — the Bad White Men and the Deep State. The neo-lumpen-proletarian para-militarists of the post-capitalist world-system, the Bad White Men that James the Demon-Dog so onanistically orchestrates are revealed in their apocalyptic abjectness as the leg breakers of history, the racist, homophobic, xenophobic, antisemitic, Hispanic-hating, Black-bashing, and women-entombing toadies of the system who are the shock-troops of the clandestine substance of The-Political-Thing-That-Has-No-Name, or the State-that-is-Dual.

The phenomenal and the noumenal, the grotesque and the sublime, the seen and the unseen, the rational and the irrational, the political and the para-political, the noirish and the weird — all of Demon Dog’s classic works (The L.A. Quartet, The Underworld U.S.A. Trilogy, My Dark Places, and The Hilliker Curse: My Pursuit of Women) stand for the proposition that it is not birth but death that makes the man. “Politics is crime,” said Ellroy, and “powerful men are children.” The View from Howard’s Fuck Pad: The Deep State, Bad White Men, and the Weird Noir of James Ellroy tells you how and why as of now it is already too late for anything. Remember — you heard it here first!

Eric Wilson is an independent researcher and writer. From 2000 to 2018 he was senior lecturer of law at Monash University, Melbourne, Australia. He has edited two volumes on radical criminology examining the relationships among covert government agency, organized crime, and extra-judicial forms of governance: Government of the Shadows: Parapolitics and Criminal Sovereignty (Pluto, 2009) and The Dual State: Parapolitics, Carl Schmitt, and the National Security Complex (Ashgate, 2012). He is also the author of The Spectacle of the False Flag: From JFK to Watergate (punctum, 2015) and The Republic of Cthulhu: Lovecraft, the Weird Tale, and Conspiracy Theory (punctum, 2016). He is currently working on two projects: a Girardian critique of “weird noir” in the Caribbean crime novel and an expanded version of his lectures on crime, law, literature, and film. His research interests are radical criminology, literary criticism, and speculative realism.