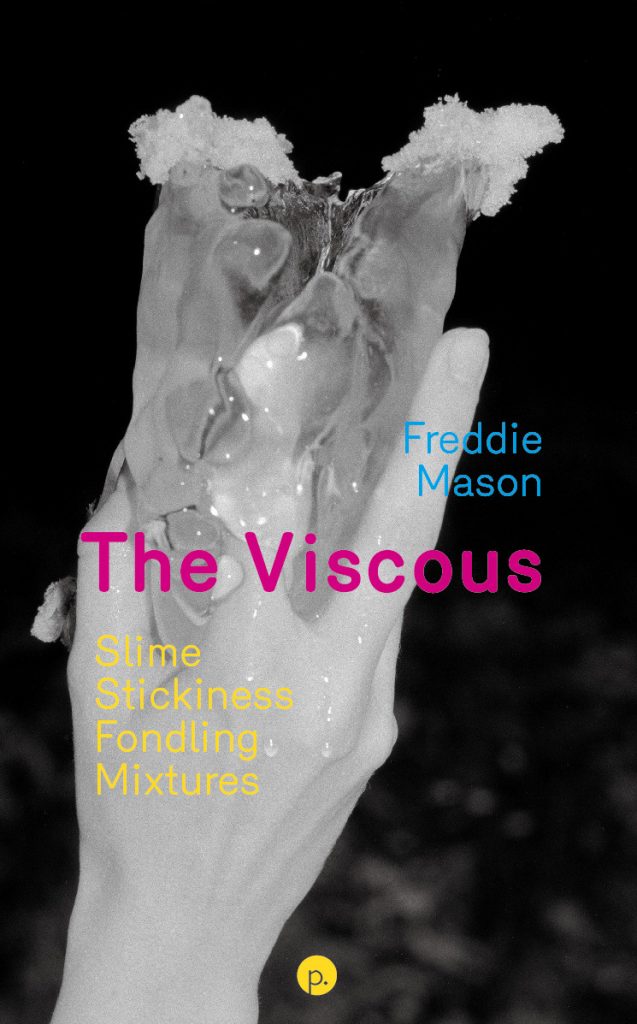 “Immersing us in a cosmos of grease, Freddie Mason shares his observations about everything sticky and squirmy. This highly tactile, wonderfully personal book is so sensually written that it seduces readers to stick their fingers right into the text. Provoking squeals of delight and revulsion, we are drawn into a protean realm where slime mould cities and factories knee-deep in molasses, overturn our expectations of materiality, technology and design thinking like a stone.” ~ Rachel Armstrong, Professor of Experimental Architecture, Newcastle University

“The flow states of late modernity, we are told, range from the liquidity that courses through our markets to the frictionless psychic slipstreams of the TED-Talk eudaemonists. Enter Freddie Mason, who takes his readers on a deep dive into viscosity. Follow him into the sticky, slick, slimy goo, and watch as he gums up the hydraulic fantasies of our moment and lubricates new conjunctions of subject and object. Proof that a live mind is a very special viscoelastic jelly.” ~ D. Graham Burnett, Princeton University

“The Viscous is a glorious exploration of that most neglected of media: slime. In this wide-ranging and often profound treatment, Mason makes it clear that we live in a universe of processes, not things, and that viscous materials can help us to understand life, bodies, minds and ourselves.” ~ Merlin Sheldrake, author of Entangled Life

Slime, goo, gunge, gloop, gels, sols, globules, jellies, emulsions, greases, soaps, syrups, glues, lubricants, liquid crystals, moulds, plasmas, and protoplasms – the viscous is not one thing, but rather a quality of resistance and flow, of stickiness and slipperiness. It is a state of matter that oozes into the gaps of our everyday existence, across age groups, between cultures and disciplines.

Since the large-scale extraction of petroleum in the 19th century, the viscous has witnessed a proliferation in the variety of its forms. Mechanized industry required lubricants and oil distillation produced waste products that were refined to form Vaseline. From this age, new viscous forms and technologies emerged: products from plastic (and plastic explosives) to cosmetics, glycerine, asphalt, sexual lubrication, hydro- and aero-gels, and even anti-climb paint.

Based on unique and wide-ranging research, The Viscous is the first major investigation of encounters with and possibilities of the viscous over the course of the last century, not simply as a material state, but also as an imaginative event. We enter into a story of matter at its most wayward, deviant, hesitant, and resistant.

From asphalt lakes to industrial molasses tanks, from liquid crystals squirming in our screens to milk fetishes, The Viscous discloses gooeyness as a peculiarly modern phase of matter. “Everything oozes,” as Beckett’s Estragon famously proclaims in Waiting for Godot. Viscous dynamics are exposed as not only hugely various in a post-industrial age, but particularly useful ways of thinking, feeling, writing, and making in a time of ecological anxiety.

Freddie Mason is a writer, researcher, and filmmaker living in London. He received his doctorate from the Royal College of art in 2019, on the history and futures of semi-states. Before The Viscous, he published Ada Kaleh (Little Island Press, 2016).