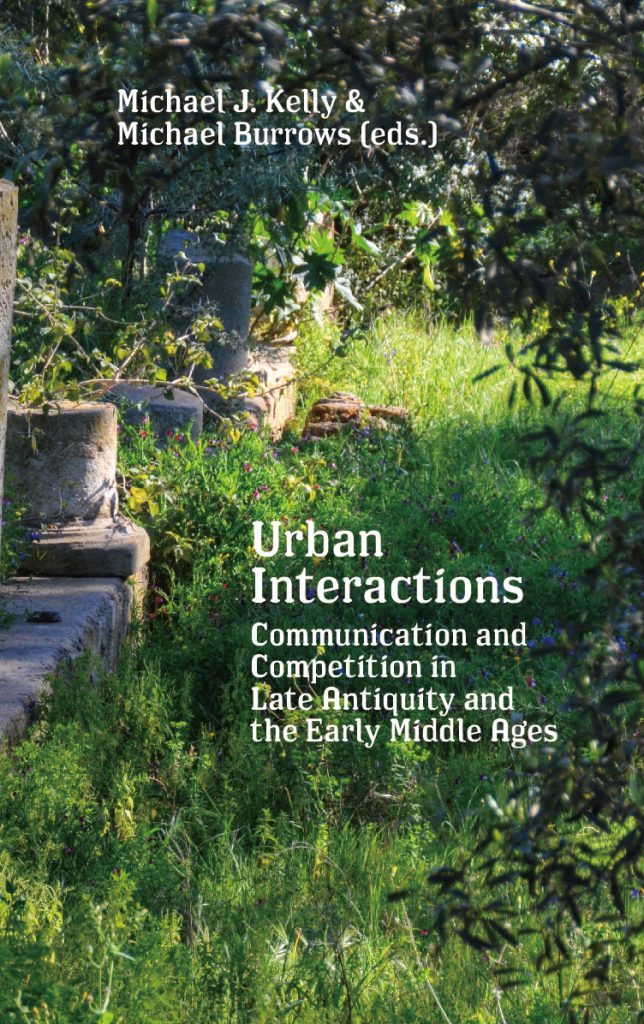 This volume is dedicated to eliciting the interactions between localities across late antique and early medieval Europe and the wider Mediterranean. Significant research has been done in recent years to explore how late “Roman” and post-“Roman” cities, towns and other localities communicated vis-à-vis larger structural phenomena, such as provinces, empires, kingdoms, institutions and so on. This research has contributed considerably to our understanding of the place of the city in its context, but tends to portray the city as a necessarily subordinate conduit within larger structures, rather than an entity in itself, or as a hermeneutical object of enquiry. Consequently, not enough research has been committed to examining how local people and communities thought about, engaged with, and struggled against nearby or distant urban neighbors.

Urban Interactions addresses this lacuna in urban history by presenting scholarship that applies a diverse spectrum of approaches, from archaeological investigation to critical analyses of historiographical and historical biases and developmental consideration of antagonisms between ecclesiastical centers. Through these avenues of investigation, this volume elucidates the relationship between the urban centers and their immediate hinterlands and neighboring cities with which they might vie or collaborate. This entanglement and competition, whether subterranean or explicit across overarching political, religious or other macro categories, is evaluated through a broad geographical range of late “Roman” provinces and post-“Roman” states to maintain an expansive perspective of developmental trends within and about the city.

Lisa Kaaren Bailey – “The Innocence of the Dead Crowned You, the Glory of the Triumphant Crowned Me”: The Strange Rivalry between Bethlehem and Lyon in Eusebius Gallicanus Sermon 11

Michael Burrows – Tours vs. Bourges: The Secular and Ecclesiastical Discourse of Inter-City Relationships in the Accounts of Gregory of Tours

Ann Christys – Did All Roads Lead to Córdoba under the Umayyads?

Pedro Mateos Cruz – Augusta Emerita in Late Antiquity: The Transformation of Its Urban Layout During the Fourth and Fifth Centuries CE

Isabel Sánchez Ramos – Looking through Landscapes: Ideology and Power in the Visigothic Kingdom of Toledo

Michael J. Kelly is Visiting Assistant Professor in Comparative Literature at Binghamton University (SUNY). He is an interdisciplinary scholar who specializes in Continental Thought, Historical Theory, and the pre-Modern History of the Mediterranean. Michael received his Ph.D. in History from the University of Leeds, where he was twice awarded the annual extraordinary research prize. Michael is Director of the international, open-access project Networks and Neighbours, co-Editor, with Dolores Castro, of the Visigothic Symposia and co-Editor, with Paulo Pachá, of Capitalism’s Past. He has published articles and books in philosophy, literary theory and history, including, with Arthur Rose, Theories of History: History Read Across the Humanities (New York & London: Bloomsbury, 2018).

Michael Burrows is a Medieval History PhD Student at the University of Leeds.