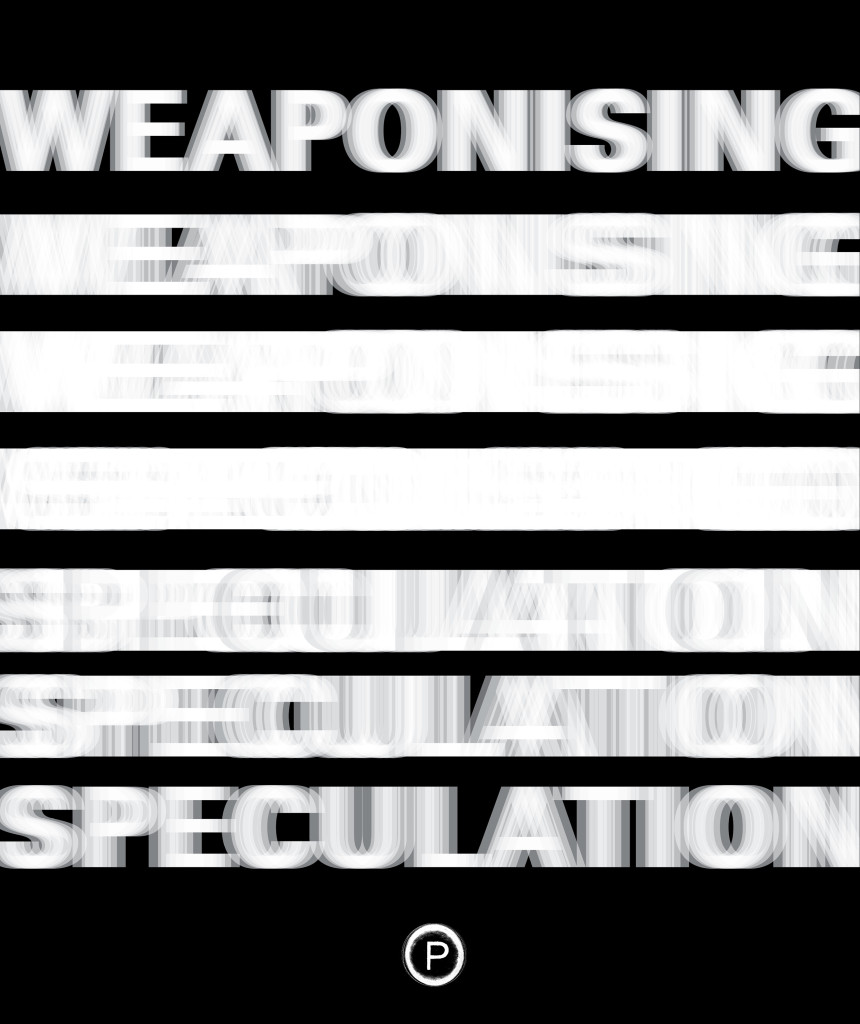 Distinct from the norm. Distinct even from the academic norm. Twice removed the para-academic is doubly unwanted. The ones you have trained are set loose and they know your secrets. They are pests and they want to be armed.

This book contains the proceedings from Weaponising Speculation, a two-day conference and exhibition that took place in Dublin in March 2013. Weaponising Speculation was organised by D.U.S.T. (Dublin Unit for Speculative Thought) and aimed to be an exploration of the various expressions of DIY theory operative in the elsewheres, the shafts and tunnels of the para-academy. The topics covered all come under the welcoming embrace of speculation, spanning a broad range: from art, philosophy, nature, fiction, and computation to spiders, culinary cosmology, and Oscar the Grouch. The book itself aims to be more than just a collection of essays and catalogue of artworks, but also a documentation of the event as a whole. An object that both those present at the event and those who missed it would want to own — bringing something new to both sets of readers.

The range of topics covered in this collection, along with the added elements of design and photography, result in a book that appeals beyond the (para)academic circle within which the Speculative Realist community currently resides. One of the original aims of the Weaponising Speculation conference, and by extension, the book, is to expand what might be considered the expected reach of the subject, bringing Speculation to a new audience — artists, designers, fans of fiction, photographers, biologists, film theorists, comedians, culinary artists, illustrators, computer programmers, and individuals from any number of fields.

Before the storms the para-academic needs to equip herself. Not only with tools, but weapons. In this way this collection is not only a book to read, an object to own, or a tool for learning, but a weapon with which to break open academic discourse, to invade and conquer as yet unknown territory, and to aid thinkers in the siege to reclaim the real.

How to Make Space-Time and Influence People — Isabel Nolan

Sweet Dreams Are Made of This: Speculation — Ridvan Askin

All That is Liquid Melts into Solid — John Ryan

The Fossils of Sensation — Alan Boardman

Caoimhe Doyle is a Graphic Designer and Black Metal Theorist living in Dublin, Ireland. She is a recent graduate of the National College of Art and Design where she studied History of Art and Design and Visual Communication. Forthcoming publications include “Sagmeister: Not not Black Metal?” in Michael O’Rourke, Karen Seliberg, and Kamillea Aghtan (eds.), P.E.S.T (Philial Edpidemic Strategy Tryst) (Radical Matters Editions and Label) and ‘The Flat Devil Net: Mapping Quantum Narratives in True Detective” (with Katherine Foyle) in Edia Connole, Paul Ennis, and Nicola Masciandaro (eds.), True Detection (SCHISM).