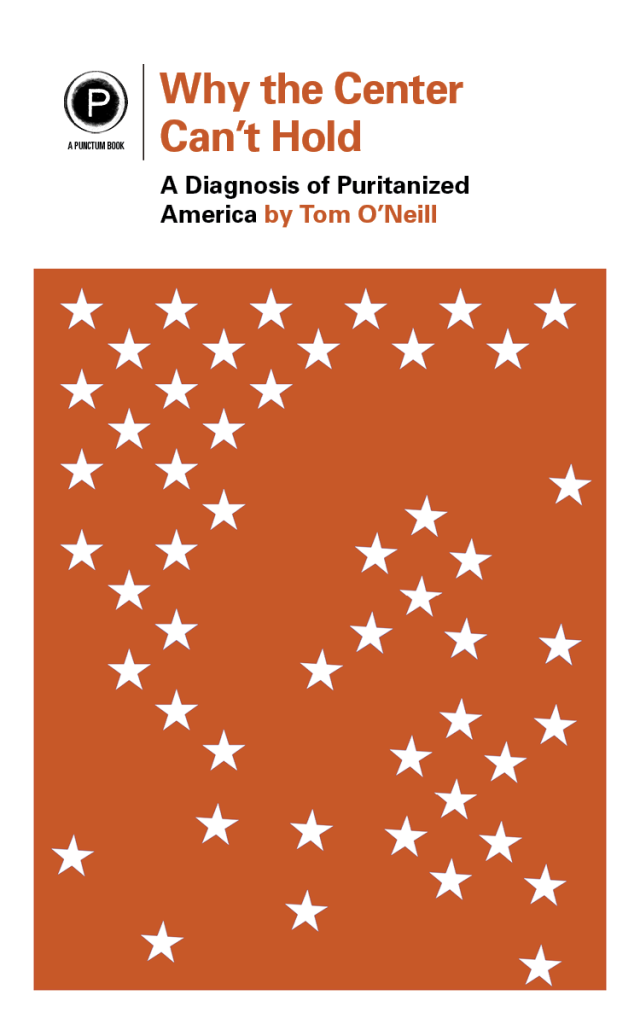 Turning and turning in the widening gyre / The falcon cannot hear the falconer; / Things fall apart; the centre cannot hold; Mere anarchy is loosed upon the world, / The blood-dimmed tide is loosed, and everywhere / The ceremony of innocence is drowned; / The best lack all conviction, while the worst / Are full of passionate intensity.

“Things fall apart; the centre cannot hold.” These words from Yeats’s poem “The Second Coming” provide Why the Center Can’t Hold with its organizing theme. And although Yeats was describing the grim atmosphere of post-World War I Europe, O’Neill regards the poem’s pronouncements as eerily predictive of the state of the world as we are currently observing it. O’Neill takes them as predictive of the agency in particular of the United States—the “Center”—in bringing about in the world the more general chaos we are now observing (relative to various refugee and migrant crises, the emergence of sophisticated and even postmodern forms of militant and cyber terrorism, banking and other monetary crises, environmental catastrophes under the aegis of climate change, the defunding of public higher education, the persistence of virulent forms of racism and other types of intolerance, the concentration of wealth in fewer and fewer hands, the marginalisation and even outright elimination of human labor forces, etc.). O’Neill provides historical analyses that illuminate why this is the case, and he also asks what changes in the United States — in its politics, in its socio-cultural formations, and in its beliefs and (supposedly common) values — might help us to avoid the inevitable (and lamentable) destruction that seems ahead.

We believe in acquisition. In our devotion to it, we’ve been willing to treat outsiders with brutality and been willing simultaneously to suppress sources of grace and health at home. Things that promote a sense of value in our lives and a sense of the preciousness of others’ lives — and of lives outside our species — are trivialized. We economize on education; we question the need for national and state parklands; the preservation of “wastelands” we regard as waste indeed; “nature” we think of as “on its own.” We wonder whether we haven’t gone overboard in funding remedies for the lives of the desperate — including our wounded veterans. We question the National Endowment for the Arts and similar enterprises, saying, “Let those who care for such things finance them from their own pockets.” With happy blindness we say, “Let there be a thousand points of light!”

In the first section of the book, O’Neill begins with a survey of destructive trends in education, finance, and military policy, and the intent here is to show how these trends work together to produce a negative synergy of great momentum. This section also looks at the systemic abuse and mismanagement of natural resources and the environmental destruction all of that has also wrought: “The war-making tendencies feed off the accumulative tendencies; the accumulative tendencies feed off the war-making tendencies. Both depress education. In the negative synergy of all this, injury to habitat is consistently written off as unintended — therefore unimportant — collateral damage.” Further, O’Neill takes an unvarnished look at Max Weber’s thesis that the Protestant ethic provides the animating force of the “spirit” of capitalism, and he finds in this ethic the common source of the destructive trends we are currently experiencing. More specifically, O’Neill accepts Weber’s claim that the doctrine of predestination, particularly as articulated by John Calvin and his immediate disciples, is not just a handy rationalization for capitalism, but is the actual motivating principle operating at its roots. Further, O’Neill agrees with Weber that while capitalism has organized the western world, it has been especially forceful in shaping America. While most everyone will acknowledge that Calvinist Puritanism functioned as the foundation for colonization in New England, it is quite a bit more to claim that Puritanism is the organizing ethos of the entire (and contemporary) United States, and it is O’Neill’s intent to trace the processes and various routes by which this surprising eventuality took place.

People will kill and be killed sooner than change their minds. In fact, this resistance to mind-change seems especially strong among us children of Puritans. And so the final question: Can we, in the face of a manifest need to do so, change our minds? Can we abandon an unexamined and bankrupt ideology?

In the second section of his book, O’Neill works to unveil the epistemological maneuvers whereby Americans attempt to deny there’s anything systematically wrong with America. He argues that various forms of skepticism provide convenient paths of evasion that allow us to dodge fairly self-evident indications of trouble. In the third section, he addresses those who acknowledge there is indeed notable, deep-rooted trouble, but who have found ways to shrug it off. In his conclusion, O’Neill suggests that the civil rights struggles of the 1950s onward (relative to race, gender, sexuality, able-ness, etc.) offer a paradigm for an alternative to our present self-destructive way of life, and that the core principles of the Enlightenment embedded in our Constitution — principles to which we have always paid lip-service — could even now lead us to a reconstitution of a better and more just American polis.

Tom O’Neill has held many jobs. To name some: he was a social worker in child welfare in Compton, California, a teacher of English to islanders in the western Pacific, and for a quarter-century before his recent retirement, a teacher of philosophy and history at community colleges in the San Francisco Bay Area. He is now retired and lives in Livermore, California.

2 thoughts on “Why the Center Can’t Hold: A Diagnosis of Puritanized America”