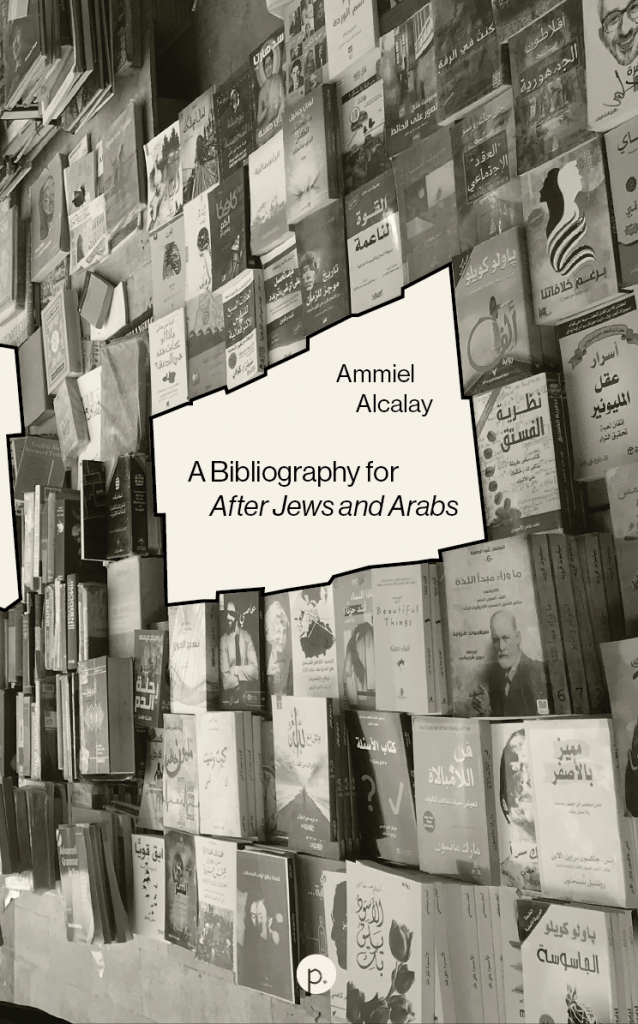 Ammiel Alcalay in After Jews and Arabs saw the bigger picture and its particulars long before just about anyone else. The book has been a gold mine for thirty years, and now its bibliography, the breadcrumb trail to its astonishing range of sources, is here for one and all to explore. It makes his mapping only more remarkable.

~ Peter Cole, MacArthur-winning poet and translator, author of The Dream of the Poem: Hebrew Poetry from Muslim and Christian Spain, 950-1492, The Poetry of Kabbalah, and Selected Poems of Solomon Ibn Gabirol

Ammiel Alcalay’s groundbreaking work, After Jews and Arabs, published in 1993, redrew the geographic, political, cultural, and emotional map of relations between Jews and Arabs in the Levantine/Mediterranean world over a thousand-year period. Based on over a decade of research and fieldwork in many disciplines—including history and historiography; anthropology, ethnography, and ethnomusicology; political economy and geography; linguistics; philosophy; and the history of science and technology—the book presented a radically different perspective than that presented by received opinion.

Given the radical and iconoclastic nature of Alcalay’s perspective, After Jews and Arabs met great resistance in attempts to publish it. Though completed and already circulating in 1989, it didn’t appear until 1993. In addition, when the book was published, there wasn’t enough space to include its original bibliography, a foundational part of the project.

A Bibliography for After Jews and Arabs presents the original bibliography, as completed in 1992, without changes, as a glimpse into the historical record of a unique scholarly, political, poetic, and cultural journey. The bibliography itself had roots in research begun in the late 1970s and demonstrates a very wide arc.

In addition to the bibliography, Alcalay’s book includes three accompanying texts. In “Behind the Scenes: Before After Jews and Arabs,” Alcalay takes us behind the closed doors of the academic process, reprinting the original reader reports and his detailed rebuttals, and in “A Bibliography for After Jews and Arabs: A Brief Introduction,” Alcalay contextualizes his own path to the work he undertook, in methodological, historical, and political terms. Also included is “A Poetics of Bibliography.”

Poet, novelist, translator, critic, and scholar Ammiel Alcalay teaches at Queens College and The Graduate Center, CUNY. His books include After Jews and Arabs, Keys to the Garden, Memories of Our Future, Islanders, and neither wit nor gold: from then. A 10th-anniversary edition of from the warring factions, a book-length poem dedicated to Srebrenica, and a book of essays, a little history, came out in 2013. a little history also came out in a Portuguese translation with Editor Lumme, São Paolo in 2019. During the wars in ex-Yugoslavia, he was the primary translator of texts from Bosnia, and translations include Sarajevo Blues and Nine Alexandrias by poet Semezdin Mehmedinović, as well as works by journalist Zlatko Dizdarević, and many others. Alcalay is the General Editor of Lost & Found: The CUNY Poetics Document Initiative, a series of student and guest-edited archival texts emerging from New American Poetry, and he was the recipient of a 2017 Before Columbus Foundation American Book Award for this work.

One thought on “A Bibliography for “After Jews and Arabs””