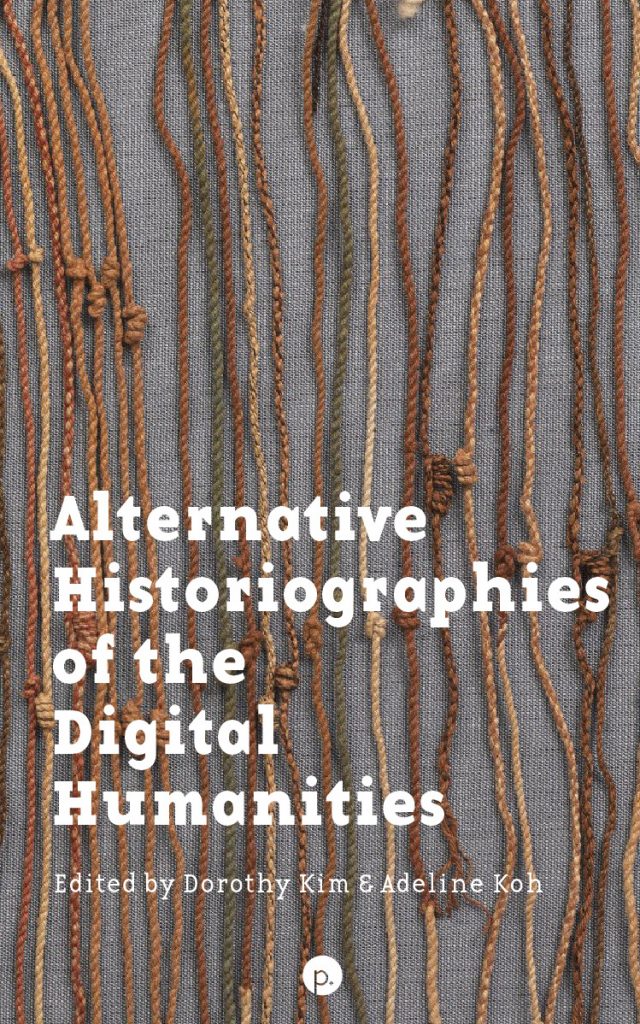 In Silencing the Past: Power and the Production of History, Michel-Rolph Trouillot writes that by examining the process of history we can “discover the differential exercise of power that makes some narratives possible and silences others.” Alternative Historiographies of the Digital Humanities examines the process of history in the narrative of the digital humanities and deconstructs its history as a straight line from the beginnings of humanities computing. By discussing alternatives histories of the digital humanities that address queer gaming, feminist game studies praxis, Cold War military-industrial complex computation, the creation of the environmental humanities, monolingual discontent in DH, the hidden history of DH in English studies, radical media praxis, cultural studies and DH, indigenous futurities, Pacific Rim postcolonial DH, the issue of scale and DH, the radical, indigenous, feminist histories of the digital database, and the possibilities for an antifascist DH, this collection hopes to re-set discussions of the straight, white origin myths of DH. Thus, this collection hopes to reexamine the silences in such a straight and white masculinist history and delineates how power comes into play to shape this straight, white DH narrative.

A number of the pieces in this volume go back to the origin myth of the digital humanities to reassess the hagiography of Father Busa by reconsidering and recontextualizing his legacy and his work in relation to media archaeology, politics, Cold War maneuvers, mechanized genocide, the Third Reich, and the military-industrial complex as it has organized various fields, including Asian Studies. This reassessment of comparative genealogies — vis-à-vis Foucault — undergirds an alternative history of the Jesuit hagiography we have so far been unwilling to reexamine for its narrative use in embellishing an origin hagiography/historiography for digital humanities. Other pieces intertwine the digital humanities with other fields — area studies, Asian American Studies, cultural studies, literary studies, and environmental studies — in order to reexamine how the intersections and juxtapositions reveal silences in these histories. And finally, a number of pieces considers alternative praxes in rethinking these histories, whether it is an essay that is a game or a reevaluation of feminist media praxis.

“Media Histories, Media Archaeologies, and the Politics and Genealogies of the Digital Humanities” by Dorothy Kim

“Why Are the Digital Humanities So Straight?” by Edmond Y. Chang

“Toward a Diligent Humanities: Digital Cultures and Archives of Post-1965 Indonesia” by Viola Lasmana

“Taxation against Overrepresentation? The Consequences of Monolingualism for Digital Humanities” by Domenico Fiormonte

“Pitching the ‘Big Tent’ Outside: An Argument for the Digital Environmental Humanities” by Alenda Y. Chang

“An Indigenist Internet for Indigenous Futures: DH Beyond the Academy and ‘Preservation’” by Siobhan Senier

“The Ancestors in the Machine: Indigenous Futurity and Games,” by Jordan Clapper

Break (Up, Down, Out, In) DH and Black Futurities

“Against Lenticular Modeling: Missives on Locating Blackness from the WhatEvery1Says Project” by Jamal Russell

This volume was originally organized and planned by Adeline Koh.

Dorothy Kim is Assistant Professor of English, specializing in medieval literature, at Brandeis University. She was a 2013-2014 Fellow at the University of Michigan’s Frankel Institute of Advanced Judaic Studies where she finished a monograph entitled Jewish/Christian Entanglements: Ancrene Wisse and its Material Worlds (forthcoming from Toronto). She also has two books, Digital Whiteness and Medieval Studies and Decolonize the Middle Ages (forthcoming in 2018 with Arc Humanities). She is the co-project director in the NEH-funded Scholarly Editions and Translations project, An Archive of Early Middle English, a database for medieval English manuscripts from 1100–1348. In addition to Disrupting the Digital Humanities, she is also co-editing, with Adeline Koh, Alternative Histories of the Digital Humanities (forthcoming from punctum), which examines the difficult histories of the digital humanities in relation to race, sexuality, gender, disability, and fascism. She has co-written articles on “#GawkingatRapeCulture” and “TwitterEthics,” and has also written articles about “TwitterPanic” and “Social Media and Academic Surveillance” at Model View Culture. She is the medieval editor for The Orlando Project (version 2.0) and can be followed on Twitter @dorothyk98. She was named by Diverse: Issues in Higher Ed 2015 as an Emerging Scholar under 40.

4 thoughts on “Alternative Historiographies of the Digital Humanities”