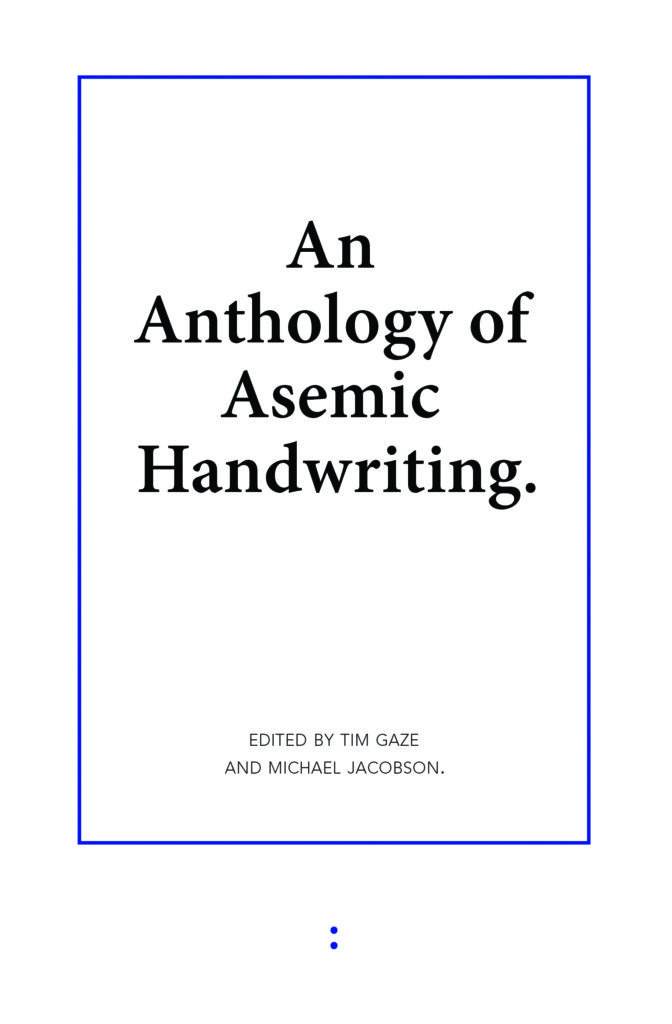 An Anthology of Asemic Handwriting is the first book-length publication to collect the work of a community of writers on the edges of illegibility. Asemic writing is a galaxy-sized style of writing, which is everywhere yet remains largely unknown. For human observers, asemic writing may appear as lightning from a storm, a crack in the sidewalk, or the tail of a comet. But despite these observations, asemic writing is not everything: it is just an essential component, a newborn supernova dropped from a calligrapher’s hand. Asemic writing is simultaneously communicating with the past and the future of writing, from the earliest undeciphered writing systems to the xenolinguistics of the stars; it follows a peregrination from the preliterate, beyond the verbal, finally ending in a postliterate condition in which visual language has superseded words. An Anthology of Asemic Handwriting is compiled and edited by Tim Gaze from Asemic magazine and Michael Jacobson from The New Post-Literate blog.

Tim Gaze began his writing career writing quirky short stories and experimental poetry, sometimes using computer programs to manipulate words. More recently, he began exploring illegible writing and non-alphabetical symbols. He founded Asemic magazine in 1999, which has grown from a folded pamphlet to a 100 page book. Attempting to understand the illegible "asemic" domain, he has written some short essays, some of them published in English or in translation. Even more recently, he is creating abstract narratives using inkblot shapes. Asemic writing, visual poetry or abstract comics are the best descriptions for some of his creations. His longer works include noology (Arrum Press) and 100 Scenes (Transgressor/asemic editions). He also makes sound recordings for fun, ranging from sound poetry to electronic soundscapes and field recordings. Tim lives in the Adelaide Hills of South Australia, close to trees.

Michael Jacobson is a writer and artist from Minneapolis, Minnesota USA. His books include The Giant’s Fence, Action Figures, Mynd Eraser, and The Paranoia Machine. Besides writing books, he curates a gallery for asemic writing called The New Post-Literate. He is also on the editorial board of SCRIPTjr.nl. In his spare time, he is working on designing a planet named “THAT”. Recently, he was published in The Last Vispo Anthology (Fantagraphics), and was interviewed by SampleKanon.