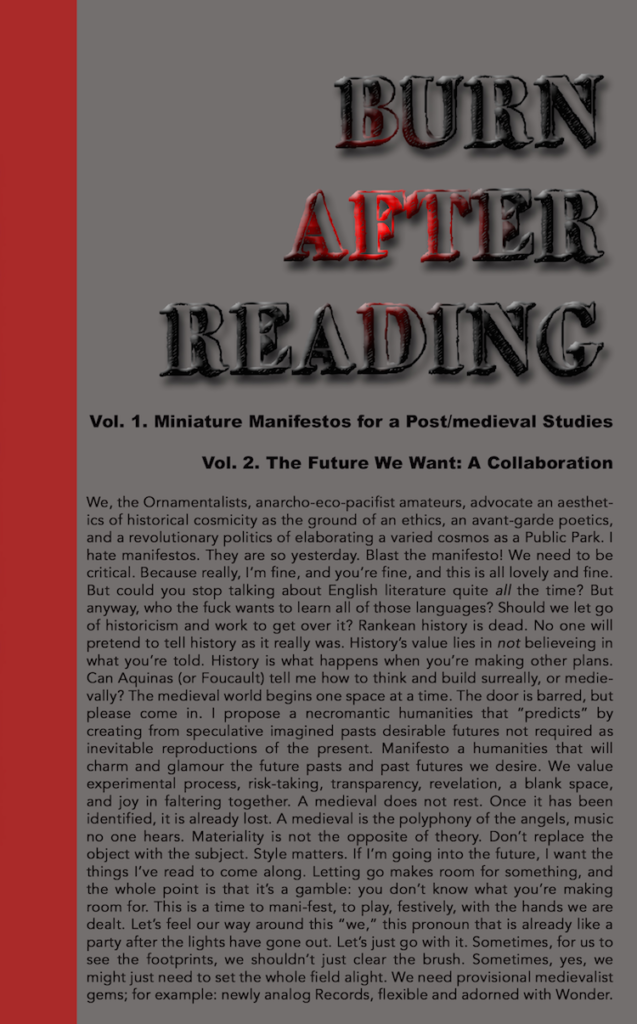 . . . better to take the risk and engage in fidelity to a Truth-event, even if it ends in catastrophe, than to vegetate in the eventless utilitarian-hedonist survival of what Nietzsche called the ‘last men.’

The essays, manifestos, rants, screeds, pleas, soliloquies, telegrams, broadsides, eulogies, songs, harangues, confessions, laments, and acts of poetic terrorism in these two volumes — which collectively form an academic “rave” — were culled, with some later additions, from roundtable sessions at the International Congress on Medieval Studies in 2012 and 2013, organized by postmedieval: a journal for medieval cultural studies and the BABEL Working Group (“Burn After Reading: Miniature Manifestos for a Post/medieval Studies,” “Fuck This: On Letting Go,” and “Fuck Me: On Never Letting Go”) and George Washington University’s Medieval and Early Modern Studies Institute (“The Future We Want: A Collaboration”), respectively. Gathering together a rowdy multiplicity of voices from within medieval and early modern studies, these two volumes seek to extend and intensify a conversation about how to shape premodern studies, and also the humanities, in the years ahead. Authors in both volumes, in various ways, lay claim to the act(s) of manifesting, and also anti-manifesting, as a collective endeavor that works on behalf of the future without laying any belligerent claims upon it, where we might craft new spaces for the University-at-large, which is also a University that wanders, that is never just somewhere, dwelling in the partitive — of a particular place — but rather, seeks to be everywhere, always on the move, pandemic, uncontainable, and always to-come, while also being present/between us (manifest). This is not a book, but a blueprint. It is also an ephemeral gathering in the present tense.

Vol. 1: Miniature Manifestos for a Post/medieval Studies, edited by Eileen A. Joy and Myra Seaman

*Miniature Manifestos for a Post/medieval Studies is a punctum book

Vol. 2: The Future We Want: A Collaboration, edited by Jeffrey Jerome Cohen

*The Future We Want: A Collaboration is an Oliphaunt book

Jeffrey Jerome Cohen is Professor of English and Director of the Medieval and Early Modern Studies Institute (MEMSI) at George Washington University. His research explores what monsters promise; how postcolonial studies, queer theory, postmodernism and posthumanism might help us to better understand the literatures and cultures of the Middle Ages (and might be transformed by that encounter); the limits and the creativity of our taxonomic impulses; the complexities of time when thought outside of progress narratives; and ecotheory. He is the author of three books: Of Giants: Sex, Monsters and the Middle Ages; Medieval Identity Machines; and Hybridity, Identity and Monstrosity in Medieval Britain: On Difficult Middles and the editor of four more, including Prismatic Ecology: Ecotheory Beyond Green (Minnesota, 2014). He blogs at In the Middle.

Eileen A. Joy is the Director of punctum books and she has published widely on medieval literature, cultural studies, intellectual and literary history, ethics, the post/human, and speculative realism. She is the co-editor of postmedieval: a journal of medieval cultural studies, and is also the Lead Ingenitor of the BABEL Working Group. She is also the co-editor of The Postmodern Beowulf (West Virginia University Press, 2007), Cultural Studies of the Modern Middle Ages (Palgrave, 2007), Dark Chaucer: An Assortment (punctum, 2012), Speculative Medievalisms: Discography (punctum, 2013), On Style: An Atelier (punctum, 2013), and L.O. Aranye Fradenburg’s Staying Alive: A Survival Manual for the Liberal Arts (punctum, 2013).

Myra Seaman is Professor of English at College of Charleston. She has published on Middle English romance, textual studies, gender studies, dream visions, medievalisms, and posthumanisms (medieval and modern). She is the co-editor of Cultural Studies of the Modern Middle Ages (2007) and Dark Chaucer: An Assortment (punctum, 2012). She is also the co-editor of postmedieval: a journal of medieval cultural studies and co-founder of the BABEL Working Group. She is currently working on an extended project that investigates affective literacy among the late medieval English gentry through an object-oriented ontological approach.