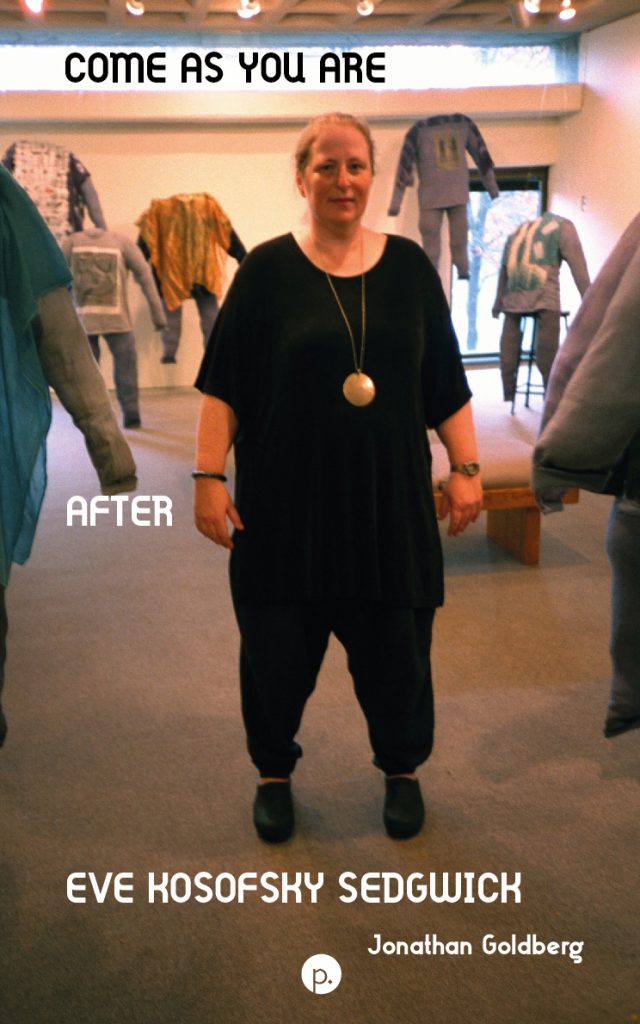 Come As You Are, After Eve Kosofsky Sedgwick brings together two pieces of writing. In the first, “After Eve Kosofsky Sedgwick,” Jonathan Goldberg assesses her legacy, prompted mainly by writing about Sedgwick’s work that has appeared in the years since her death in April 2009. Writing by Lauren Berlant, Jane Gallop, Katy Hawkins, Scott Herring, Lana Lin, and Philomina Tsoukala are among those considered as he explores questions of queer temporality and the breaching of ontological divides. Main concerns include the relationship of Sedgwick’s later work in Proust, fiber, and Buddhism to her fundamental contribution to queer theory, and the axes of identification across difference that motivated her work and attachment to it.

“Come As You Are,” the other piece of writing, is a previously unpublished talk Sedgwick gave in 1999–2000. It represents a significant bridge between her earlier and later work, sharing with her book Tendencies the ambition to discover the “something” that makes queer inextinguishable. In this piece, Sedgwick does that by contemplating her own mortality alongside her creative engagement with Buddhist thought, especially the in-between states named bardos and her newfound energy for making things. These were represented in a show of her fabric art, “Floating Columns/In the Bardo,” that accompanied her talk, a number of images of which are included in this book. They feature floating figures suspended in the realization of death. They are objects produced by Sedgwick, made of fabric; they come from her, yet are discontinuous with her, occupying a mode of existence that exceeds the span of human life and the confines of individual identity. They could be put beside the queer transitive identifications across difference that Goldberg’s essay explores.

Jonathan Goldberg is Arts and Sciences Distinguished Professor Emeritus at Emory University. His most recent publications include Sappho ]fragments (punctum 2018), and Saint Marks: Words, Images, and What Persists (Fordham, 2019). He is the editor of The Weather in Proust, the posthumous publication of Eve Kosofsky Sedgwick, whose transformative books include Epistemology of the Closet, A Dialogue on Love, and Touching Feeling.