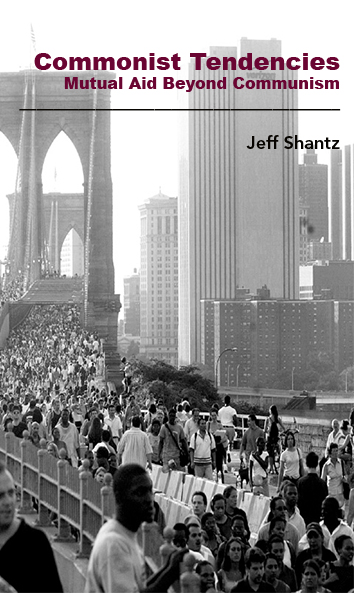 As capitalist societies in the twenty-first century move from crisis to crisis, oppositional movements in the global North have been somewhat stymied (despite ephemeral manifestations like Occupy), confronted with the pressing need to develop organizational infrastructures that might prepare the ground for a real, and durable, alternative. More and more, the need to develop shared infrastructural resources — what Shantz terms “infrastructures of resistance” — becomes apparent. Ecological disaster (through crises of capital), economic crisis, political austerity, and mass produced fear and phobia all require organizational preparation — the common building of real world alternatives.

There is, as necessary as ever, a need to think through what we, as non-elites, exploited, and oppressed, want and how we might get it. There is an urgency to pursue constructive approaches to meet common needs. For many, the constructive vision and practice for meeting social needs (individual and collective) is expressed as commonism — an aspiration of mutual aid, sharing, and common good or common wealth collectively determined and arrived at. The term commonsim is a useful way to discuss the goals and aspirations of oppositional movements, the movement of movements, because it returns to social struggle the emphasis on commonality — a common wealth — that has been lost in the histories of previous movements that subsumed the commons within mechanisms of state control, regulation, and accounting — namely communism.

In the current context, commonism, and the desire for commons, speaks to collective expressions against enclosure, now instituted as privatization, in various realms. While the central feature of capitalism is the commodity — a collectively produced good controlled for sale by private entities claiming ownership — the central feature of post-capitalist societies is the commons. These counter-forces have always been in conflict throughout the history of capitalism’s imposition. And this conflict has been engaged in the various spheres of human life, as mentioned above. Commonism, (and commonist struggles), is expressed in intersections of sites of human activity and sustenance: ecological, social, and ideational. Examples of ecological commonism include conservation efforts, indigenous land reclamations and re-occupations (and blockades of development), and community gardens, to name only a few. Social commons include childcare networks, food and housing shares, factory occupations, and solidarity economics (including but not limited to community cooperatives). Ideational commons include creative commons, opens source software, and data liberation (such as Anonymous and Wikileaks). This becomes procreative or constructive. It provides a spreading base for eco-social development beyond state capitalist control. It also moves movements from momentary spectacles or defensive stances or reactive “fightbacks.” Commonism affirms and asserts different ways of doing things, of living, of interacting.

This book engages various commonist tendencies.  It examines communism, including overlooked or forgotten tendencies.  It provides an exploration of primitive accumulation and mutual aid as elements of struggle. Attention is given to constructive aspects of commonist politics from self-valorization against capital to gift economies against the market. It finally speaks to the need of movements to build infrastructures of resistance that sustain struggles for the commons. Written by a longtime activist/scholar, this is a work that will be of interest to community organizers and activists as well as students of social movements, social change, and radical politics. It will be taken up by people directly involved in specific community movements as well as students in a range of disciplines (including sociology, politics, geography, anthropology, cultural studies, and social policy).  There is no book that offers such a concise, readable discussion of the issues in the current context, with particular emphasis on anarchist intersections with communism.