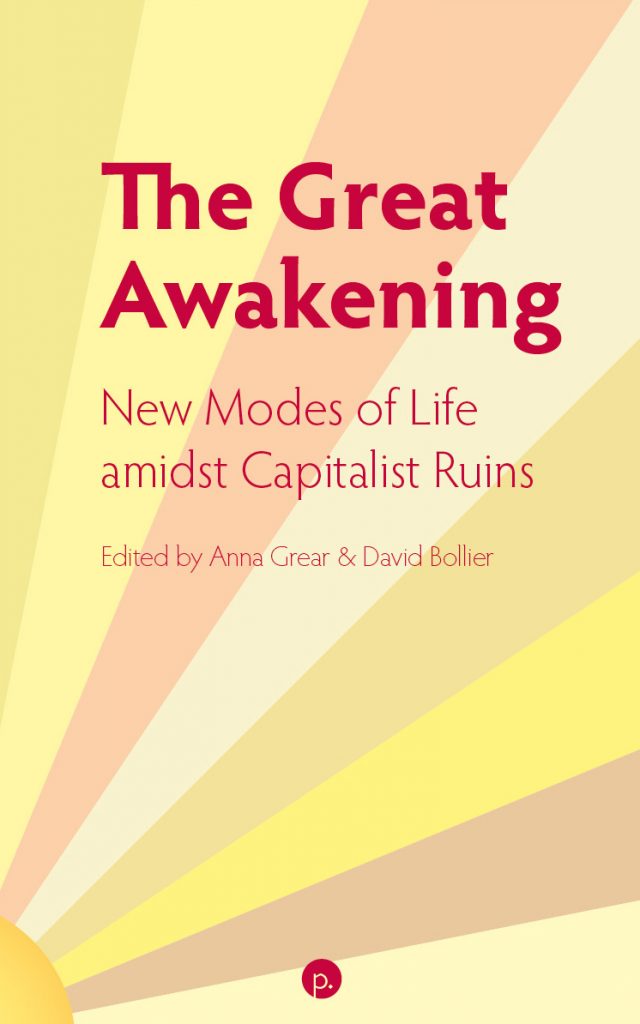 As we enter a time of climate catastrophe, worsening inequality, and collapsing market/state systems, can human societies transcend the old, dysfunctional paradigms and build the world anew? There are many signs of hope.

In The Great Awakening, twelve cutting-edge activists, scholars, and change-makers probe the deep roots of our current predicament while reflecting on the social DNA for a post-capitalist future. We learn about seed-sharing in agriculture, blockchain technologies for networked collaboration, cosmolocal peer production of houses and vehicles, creative hacks on law, and new ways of thinking and enacting a rich, collaborative future. This surge of creativity is propelled by the social practices of commoning new modes of life for creating and sharing wealth in fair-minded, ecologically respectful ways.

It is clear that the multiple, entangled crises produced by neoliberal capitalism cannot be resolved by existing political and legal institutions, which are imploding under the weight of their own contradictions. Present and future needs can be met by systems that go beyond the market and state. With experiments and struggle, a growing pluriverse of commoners from Europe and the US to the Global South and cyberspace are demonstrating some fundamentally new ways of thinking, being and acting. This ontological shift of perspective is making new worlds possible.

3. TWILIGHT OF THE NATION-STATE (AT A TIME OF RESURGENT NATIONALISM)? / Richard Falk

Anna Grear is Professor of Law and Theory at Cardiff University, UK. She has authored a range of books and articles addressing law’s construction of the world, and offering a sustained critical engagement with law’s underlying philosophical and political assumptions. Anna is Founder and Editor in Chief of the Journal of Human Rights and the Environment. She is also an Associate Fellow of the New Economy Law Centre, Vermont University, USA; Adjunct Professor of Law at the University of Waikato, New Zealand; and a member of the United Nations Sustainable Development Solutions Network.

David Bollier is an activist, scholar, and blogger focused on the commons as a new/old paradigm for re-imagining economics, politics, and culture. He pursues this work as Director of the Reinventing the Commons Program at the Schumacher Center for a New Economics (US), and as cofounder of the Commons Strategies Group, an international advocacy project. Bollier is the author of Think Like a Commoner: A Short Introduction to the Life of the Commons; co-editor of Patterns of Commoning and The Wealth of the Commons; and co-author of Green Governance. He blogs at Bollier.org and lives in Amherst, Massachusetts.

17 thoughts on “The Great Awakening: New Modes of Life amidst Capitalist Ruins”