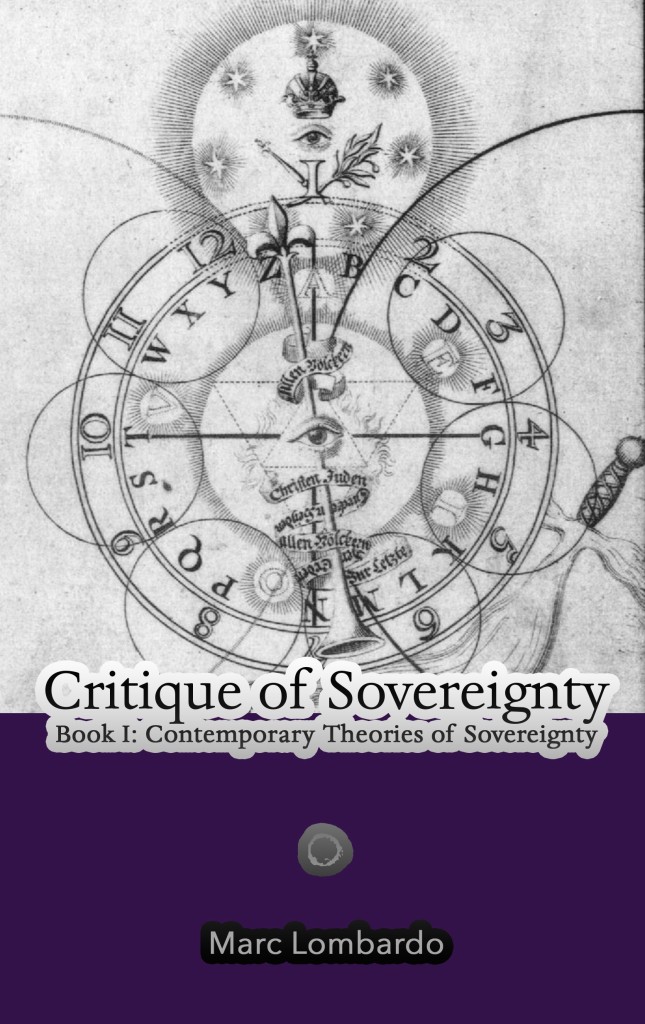 I read in Gouy’s Histoire de France: “The slightest insult to the King meant immediate death.” In the American Constitution: “The people are sovereign.” In Pouget’s Père Peinard: “Kings get fat off their sovereignty, while we are starving on ours.” Courbon’s Secret du Peuple tells me: “The people today means the mass of men to whom all respect is denied.” Here we have, in a few lines, the misadventures of the principle of sovereignty.

Using the Western tradition of metaphysical and political thought as a backdrop, Critique of Sovereignty (a work in 4 volumes) re-examines the concept of sovereignty in order to better understand why our ethical values and technical capacities often seem so divorced from our lived realities. On the one hand, ostensibly self-enclosed entities like the nation-state and the person are rhetorically bolstered as sites of technical agency and/or moral responsibility. On the other hand, these same entities appear fragile — if not purely fictional — in relation to ever ongoing tidal processes such as the migration, diffusion, and conglomeration of bodies, capital, ideas, etc. While some of our institutions might work some of the time, they always seem to work differently than we like to think they do. Accordingly, the forging of more humane institutions might very well entail if not require ways of thinking that strive to undo the self-imagined binds, exceptions, and sureties of thought for the sake of embracing a continuity with all that withers, decays, and falls away.

Book I, “Contemporary Theories of Sovereignty,” compares the varied interpretations of sovereignty given by a range of 20th-century political theorists (Maritain, Foucault, Derrida, Schmitt, Agamben, Hardt, and Negri) with Jean Bodin’s initial outline of the concept, rendered at the outset of modern political thought in the 16th century. The analytic framework of sovereignty encountered in these comparative readings provides an initial point of departure for unfolding a method of critique appropriate to the concept of sovereignty. Sovereignty is an ideal starting point for a critique of the deadlocks between thought and reality for a simple reason: it doesn’t actually exist. When it serves as a guide to action, sovereignty may be regarded as a particularly captivating fantasy. The closer it appears, the further it recedes, and, too often, the more vigorously it is pursued.

Other books to appear later in this series include Book II: The Concept of Sovereignty in the History of Philosophy, Book III: Aristotle’s Politics, and Book IV: Consequences of Sovereignty.

Marc Lombardo is an independent philosopher, essayist, economist, and activist. His last book, Economies of Whiteness, was praised by Mike Davis as “a stinging expose of enduring white-skin privilege.” After receiving his doctorate from European Graduate School, Marc has since gone on to a life of varied intellectual struggle. From his participation with the Occupy movement, he has taken the enduring conviction that a better world is not only possible but practically workable as well. Lombardo tweets as @aliveoccupation.