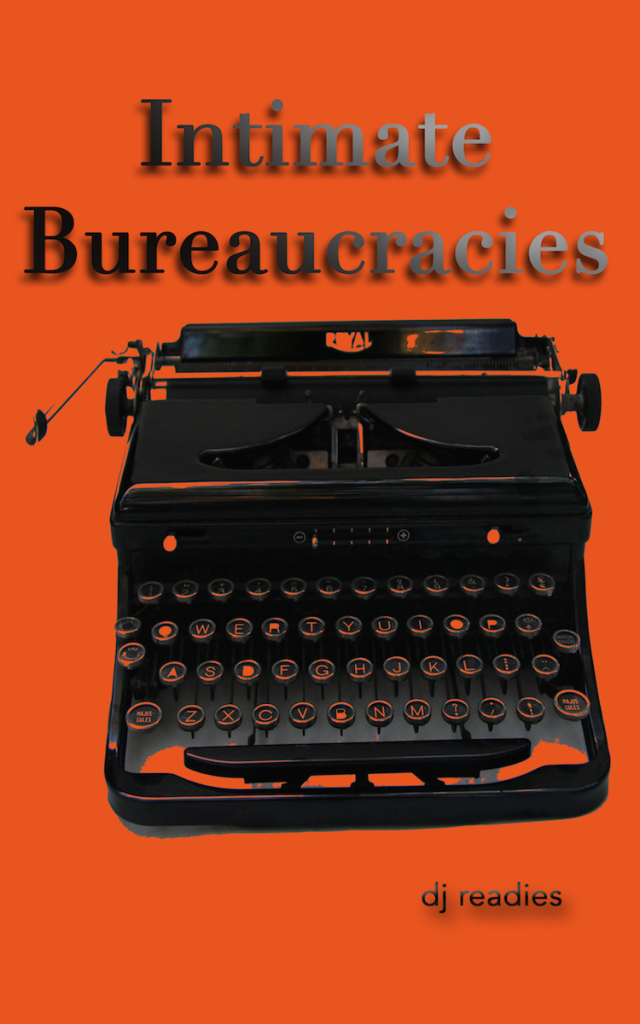 Intimate Bureaucracies is a history from the future looking backward at our present moment as a turning point. Our systems of organization and control appear unsustainable and brutal, and we are feeling around in the dark for alternatives. Using experiments in social organization in downtown New York City, and other models of potential alternative social organizations, this manifesto makes a call to action to study and build sociopoetic systems.

One alternative system, the Occupy movement, has demands and goals beyond the specific historical moment and concerns. This short book/manifesto suggests that the organization and communication systems of Occupying encampments represent important necessities, models, goals, and demands, as well as an intimate bureaucracy that is a paradoxical mix of artisanal production, mass-distribution techniques, and a belief in the democratizing potential of social media.

Participatory decentralization, a mantra of political networks, expresses a peculiar intimate bureaucratic form. These forms of organization represent a paradoxical mix of artisanal production, mass-distribution techniques, and a belief in the democratizing potential of social media. Borrowing from mass-culture image banks, these intimate bureaucracies play on forms of publicity common in societies of spectacles and public relations. Intimate bureaucracies monitor the pulse of the society of the spectacle and the corporatized bureaucracies: economics as in Big Business, culture as in Museums and Art Markets, mass media as in Studio Systems and Telecommunication Networks, safety as in Big Brother militarized police forces, and politics as in Big Government. Rather than simply mounting a campaign against big conglomerations of business, government, police, and culture, these intimate bureaucracies and their works use the forms of corporate bureaucracies for intimate ends. Rather than reach the lowest common denominator, they seek to construct what those in the business world would call niche marketing to ultra-specific demographics. Businesses, interested in utilizing the World Wide Web and the Internet, already use these strategies for niche marketing. The historical examples and sketches, explored in this pamphlet, examine how these cultural experiments emulate and resist the systems used in Internet marketing.

The apparent oxymoron, intimate bureaucracies, suggests not only a strategy, but the very basis for the new productive mythology surrounding the electronic World Wide Web.

Intimacy, the close familiarity of friendship or love, by definition depends on a small-scale system of communication. Its warmth, face-to-face contact, and fleeting impact has often made it the subject of art and literature. It usually only appears in administration situations as either an insincere ornamentation of a political campaign (“pressing the flesh” or “kissing babies”), or as inappropriate office behavior (affairs, gossip, child abuse, etc.), but rarely as the center of a political system. The “small is beautiful” movement of the 1960’s and 1970’s did suggest the possibility of an intimacy in politics, but not how to scale the system to the size of a government.

Published in collaboration with:

Minor Compositions is a series of interventions & provocations drawing from autonomous politics, avant-garde aesthetics, and the revolutions of everyday life.

dj readies has published, under another name, Networked Art (2001), Artificial Mythologies (1997), editions of Bob Brown’s Words (2010) and Readies (2010), and recently edited or co-edited volumes on Posthumography (2010), Imaging Place (2009), and Drifts (2007). Listen for more. dj readies, under a different name, works in the Language, Literacy, & Culture program at University of Maryland, Baltimore County; his bobble-head babbles on folkvine.org and his reading machine scratches at readies.org.