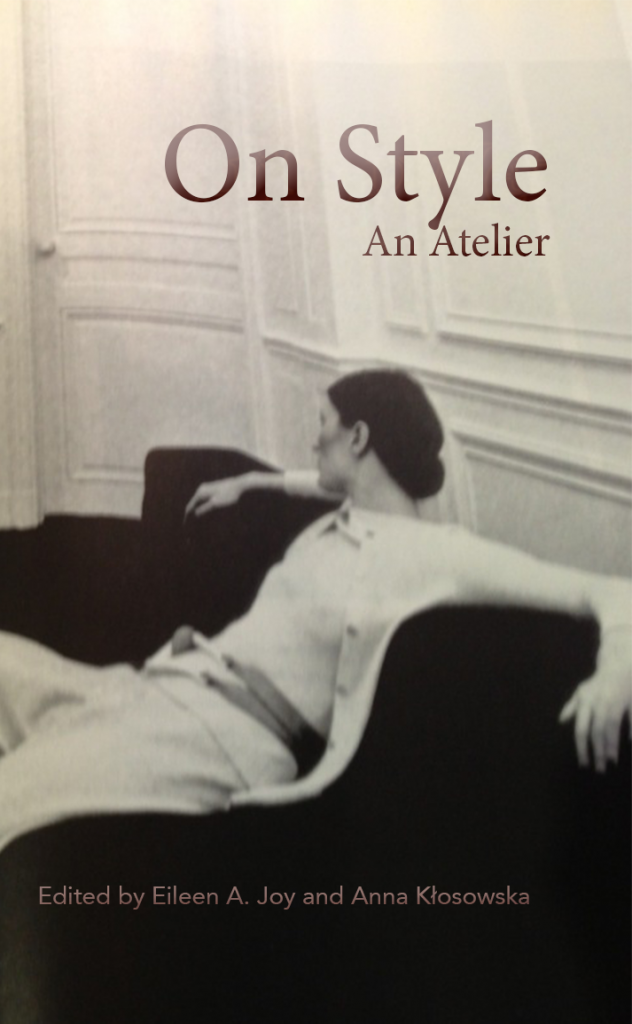 Style, more than species, is what distinguishes the howl of the wolves saluting the moon from the songs of the neighborhood dogs rising over fences and alleyways.

Aesthetic form is a spellbinding (or not) attempt to transmit and circulate affect, without which not much happens at all.

Scholarship in medieval studies of the past 20 or so years has offered some provocative experiments in, and elegant exempla of, style. Scholars such as Anne Clark Bartlett, Kathleen Biddick, Catherine Brown, Brantley Bryant, Michael Camille, Jeffrey Jerome Cohen, Carolyn Dinshaw, James Earl, L.O. Aranye Fradenburg, Roberta Frank, Amy Hollywood, Cary Howie, C. Stephen Jaeger, Eileen Joy, Anna Klosowska, Nicola Masciandaro, Peggy McCracken, Paul Strohm, David Wallace, and Paul Zumthor, among others, have blended the conventions of academic writing with those of fiction, drama, memoir, comedy, polemic, and lyricism, and/or have developed what some would describe as elegant, and arresting (and in some cases, deliciously difficult) prose styles. As these registers merge, they can produce what has been called a queer historiographical encounter (or in queer theorist Elizabeth Freeman’s terms, “an erotohistoriography”), a “poetics of intensification,” and even a “new aestheticism.” The work of these scholars has also opened up debates (some rancorous) that often install what the editors of this volume feel are false binaries between form and content, feeling and thinking, affect and rigor, poetry and history, attachment and critical distance, enjoyment and discipline, style and substance. As Anna Klosowska writes in her contribution to this volume,

The question of style, as it applies to medieval studies, is precisely the overcoming of that dichotomy between Nature and Man: a third element. And when the critique proceeds through the denunciation of the inimitability of someone’s style, as if it were the third sex, ungenerative, queer, sterile, sodomitic, lesbian, etc., the critic unconsciously puts his finger on exactly what style is; but that critic is mistaken about the style’s supposedly non-generative powers. In fact, style, neither fact nor theory but facilitating the transition between the two, is … the generative principle itself.

What can be said about the “style” of academic discourse at the present time, especially in relation to historical method, theory, and reading literary and historical texts? Is style merely supplemental to scholarly substance? As scholars, are we “subjects” of style? And what is the relationship between style and theory? Is style an object, a method, or something else? These were the questions that guided two conference sessions organized by the BABEL Working Group in 2010 (in Kalamazoo, Michigan and Austin, Texas), out of which this volume was developed. On Style: An Atelier gathers together medievalists and early modernists, as well as a poet and a novelist, in order to offer ruminations upon style in scholarship and theoretical writing (Roland Barthes, Carolyn Dinshaw, Lee Edelman, Bracha Ettinger, Charles Fourier, L.O. Aranye Fradenburg, Heidegger, Lacan, Ignatius of Loyola, and the Marquis de Sade, among others), as well as upon various trajectories of fashionable representation and self-representation in literature, sculpture, psychoanalysis, philosophy, religious history, rhetoric, and global politics.

Eileen A. Joy, “On Style: A Prefatory Note”

Michael D. Snediker, “To Peach or Not to Peach: Style and the Interpersonal”

Gila Aloni, “The Aesthetics of Style and the Politics of Identity Formation”

Valerie Vogrin, “The Unceasing Call of Style: A Novelist’s Perspective” 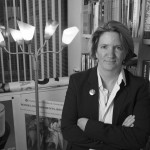 Eileen A. Joy is the Director of punctum books and has published widely on medieval literature, cultural studies, intellectual and literary history, ethics, the post/human, and speculative realism. She is the co-editor of postmedieval: a journal of medieval cultural studies, and is also the Lead Ingenitor of the BABEL Working Group. She is also the co-editor of The Postmodern Beowulf (West Virginia University Press, 2007), Cultural Studies of the Modern Middle Ages (Palgrave, 2007), Dark Chaucer: An Assortment (punctum, 2012) and Speculative Medievalisms: Discography (punctum, 2013). 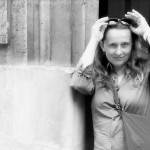 Anna Klosowska is Professor of French at Miami University, author of Queer Love in the Middle Ages (Palgrave, 2005), and editor of Madeleine de l’Aubespine, Selected Poems and Translations (Chicago, 2007) and Violence Against Women in Medieval Texts (Florida, 1998). Author of over 20 articles on queer theory and premodern literature, she is also on the editorial boards of Glossator: Practice and Theory of the Commentary and postmedieval: a journal of medieval cultural studies. 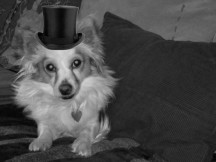 Mon. Sparkles Joy is a bon vivant, demi-Papillon about town, acolyte of Adonis, and impossibly gorgeous. He writes a well-known advice column where he addresses such concerns as how to accessorize your scarlet Oscar de la Renta gown with tiered ruffles, the proper way to scent handkerchiefs, the correct temperature setting for your walk-in humidor, whether or not one should perfume one’s beard, where to bring a Viking on a first date, which stationery to use when breaking up with a paramour, and other such matters.

One thought on “On Style: An Atelier”