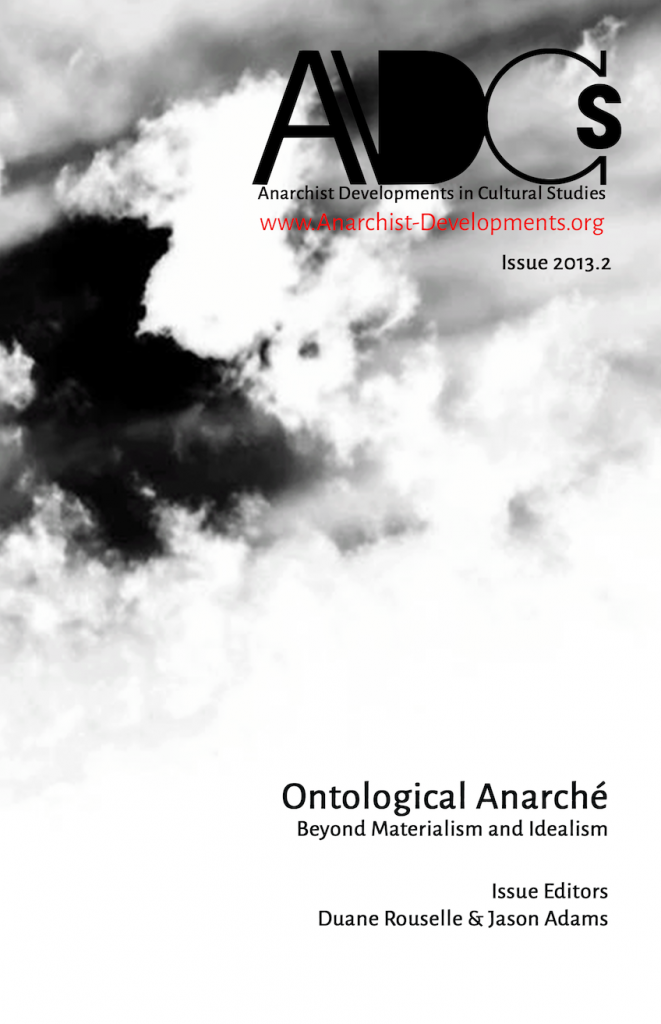 Is it possible for anarchism to think with the new ontologies and new materialisms, and is it possible to build a deeper anarchist philosophy which does not reduce the world to what it is for human animals within that world? Is it possible to think the question of a non-essentialist ontology?

Radical theory has always been beset by the question of ontology, albeit to varying degrees and under differing conditions. In recent years, in particular, political metaphysics has returned with force: the rise of Deleuze-influenced “new materialisms,” along with post-/non-Deleuzian Speculative Realism (SR) and Object-Oriented Ontology (OOO), all bear testament to this. In this same period, anarchism has returned as a major influence on social movements and critical scholarship alike. What, then, are some of the potential resonances between these currents, particularly given that anarchism has so often been understood/misunderstood as a fundamentally idealist philosophy? This special issue of Anarchist Developments in Cultural Studies (Issue 2013.2) considers these questions in dialogue with the new materialisms, Speculative Realism, and Object-Oriented Ontology, in order to seek new points of departure. It is in this sense that ADCS also strives to play a critical role recent discussions in the wider political, cultural, and philosophical milieu.

Anarchist Developments in Cultural Studies (ADCS), edited by Duane Rousselle and Süreyyya Evren, is an international, open-access journal devoted to the study of new and emerging perspectives in anarchist thought and practice from or through a cultural studies perspective. The interdisciplinary focus of the journal presumes an analysis of a broad range of cultural phenomena, the development of diverse methodological traditions, as well as the investigation of both macro-structural issues and the micrological practices of “everyday life.” ADCS is an attempt to bring anarchist thought into contact with innumerable points of connection.