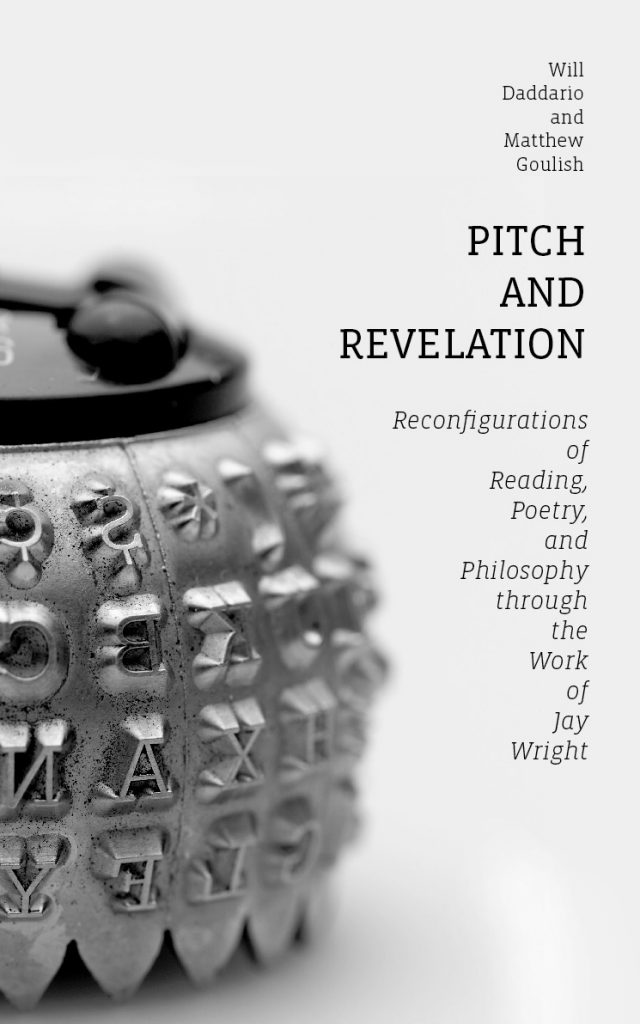 In Wright’s poetry, Goulish and Daddario find “philosophy practice” as dance and rhythm, as music and action, as linguistic and extra-linguistic games, as becoming and the event; in short, a range of operations that, as they put it, “resist the fragmentation of knowledge.” … This text will grow and transform with each reading. That is its poetry, its performance, and its philosophy.
~ Branislav Jakovljević, Stanford University

by Will Daddario, Matthew Goulish

Pitch and Revelation exhibits the joy of reading the poetry, prose, and dramatic literature of the American poet Jay Wright (1934–). “Joy” carries philosophical weight here, as it did for Spinoza who understood joy as that affect necessary for the construction of intellectual love of God. Since “God” for Spinoza, as Eliza Ritchie (among others) has pointed out, “is universal existence, or being itself […] the is of all things,” Spinoza’s joy takes us well beyond the provincial notion of a religious God and leads us into the infinite univocity of everything. Similarly, with Wright, joy leads to a visceral sense of what we call the great weave of the world. This weave is akin to the notion of entanglement made popular by physicists and contemporary scholars of Science Studies, such as Karen Barad, which speaks of the always ongoing, mutually constitutive connections of all matter and intellectual processes.

By exhibiting and detailing the joy of reading Wright, we intend to help others chart their own paths into the intellectual, musical, and rhythmical territories of Wright’s world so as to more fully experience joy in the world generally. Our exhibitions of meaning making are instructive, but they do not follow the “do as I do” or “do as I say” model of instructional texts. Instead, our readings invite the reader to “do along with us” as we make meaning from selections across Wright’s erudite, dense, rhythmically fascinating, endlessly lyrical, highly structured, and seemingly hermetic body of work.

Will Daddario is a grief worker, teacher, and scholar of theatre and performance. He is a founding member of the Performance Philosophy network and editor of that group’s online journal and book series. He is currently the project editor for a forthcoming three-volume series dedicated to the selected plays of Jay Wright. To read more about his scholarly work, you can visit willdaddario.com. For more on his grief work, visit invitingabundance.net.

Matthew Goulish co-founded Every house has a door in 2008 with Lin Hixson. He is dramaturg, writer, and sometimes performer with the company. He was a founding member of Goat Island, the Chicago-based performance group that existed from 1987 to 2009. His books include 39 Microlectures: In Proximity of Performance (Routledge, 2001), and The Brightest Thing in the World: 3 Lectures from the Institute of Failure (Green Lantern Press, 2012). His essays have appeared in Richard Rezac Address (University of Chicago Press, 2018) and Propositions in the Making: Experiments in a Whiteheadian Laboratory (Rowman & Littlefield, 2020). He teaches in the Writing Program of The School of the Art Institute of Chicago.