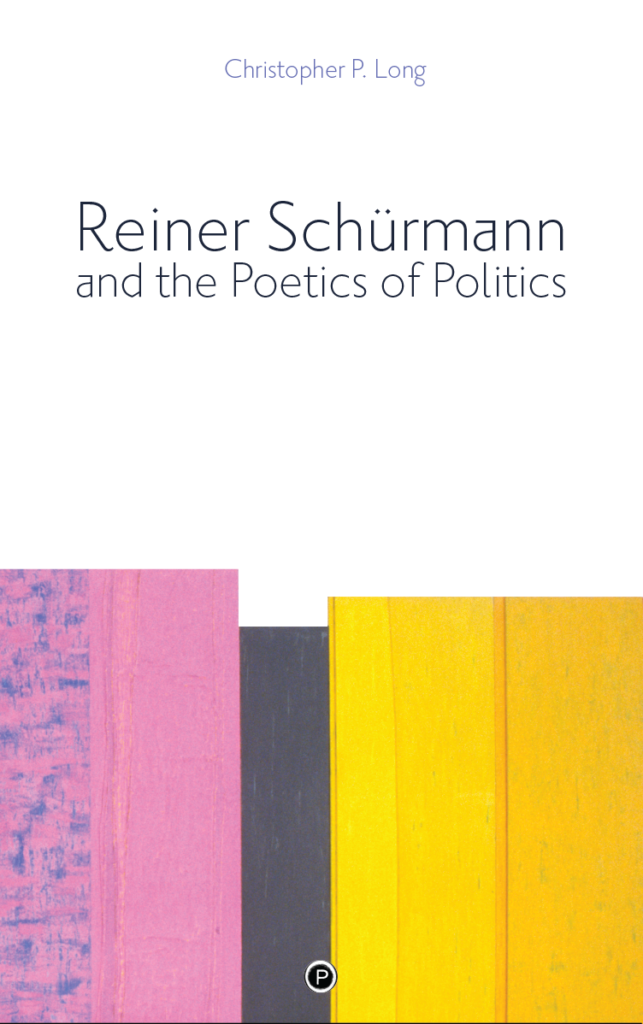 Reiner Schürmann’s thinking is, as he himself would say, “riveted to a monstrous site.” It remains focused on and situated between natality and mortality, the ultimate traits that condition human life. This book traces the contours of Schürmann’s thinking in his magnum opus Broken Hegemonies in order to uncover the possibility of a politics that resists the hegemonic tendency to posit principles that set the world and our relationships with one another into violent order.

The book follows in the footsteps of Oedipus who, in abject recognition of his finitude, stumbles upon the possibility of another politics with the help of his daughters at Colonus. The path toward this other, collaboratively created and thus poetic politics begins with an encounter with Aristotle, a thinker whom Schürmann most frequently read as the founder of hegemonic metaphysics, but whose thinking reveals itself as alive to beginnings in ways that open new possibility for human community.

This return to beginnings leads, in turn, to Plotinus, who Schürmann reads as marking the destitution of the ancient hegemony of the Parmenidean principle of the One. By bringing Schürmann’s innovative and compelling reading of René Char’s poem, The Shark and the Gull, into dialogue with Plotinus we come to encounter the power of symbols to transform reality and open us to new constellations of possible community. In Plotinus, where we expected to encounter an end, we experience a new way of thinking natality in terms of what comes to language in Char as the nuptial. Having thus been awakened to the power of symbols, we are prepared to experience how in Kant being itself comes to expression as plurivocal in a way that reveals just how pathologically delusional it is to attempt to deploy univocal principles in a plurivocal world. This opens us to what Schürmann calls the “singularization to come,” a formulation that gestures to a mode of comportment at home in the ravaged site between natality and mortality. This then returns us to Oedipus at Colonus; but not to him alone. Rather, it points to the relationship that emerges for a time between Antigone, Ismene, and Oedipus, as they navigate a way between their exile from Thebes and Oedipus’s final resting place near Athens. Here, having been awakened to the power of a poetic politics, we attend to three symbolic moments of touching between Oedipus and his daughters through which we might discern something of the new possibilities a poetic politics opens for us if we settle into the ravaged site that conditions our existence, together.

Christopher P. Long is Professor of Philosophy and Dean of the College of Arts & Letters at Michigan State University. His extensive publications in Ancient Greek and Contemporary Continental Philosophy include four books: The Ethics of Ontology (SUNY, 2004), Aristotle On the Nature of Truth (Cambridge, 2010), Socratic and Platonic Political Philosophy: Practicing a Politics of Reading (Cambridge, 2014), and Reiner Schürmann and the Poetics of Politics (punctum, 2018). He is co-founder of the Public Philosophy Journal, editor of the Journal for General Education, and a co-PI for the Mellon-funded HuMetricsHSS initiative. To learn more about his administrative approach and his recent research in philosophy, digital scholarly communication, and higher education, visit his blog or reach him on Twitter.

2 thoughts on “Reiner Schürmann and the Poetics of Politics”