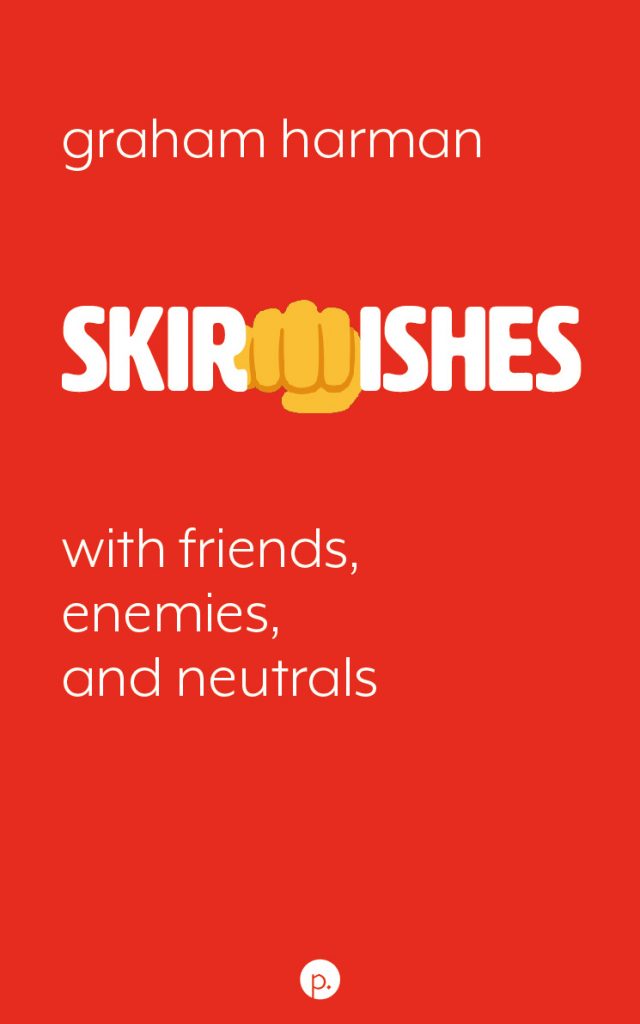 One of the fifty most influential living philosophers, a “self-promoting charlatan” (Brian Leiter), and the orchestrator of an “online orgy of stupidity” (Ray Brassier). In Skirmishes: With Friends, Enemies, and Neutrals, Graham Harman responds with flair and wit to some of his best-known critics and fellow travelers. Pulling no punches, Harman gives a masterclass in philosophical argumentation by dissecting, analyzing, and countering their criticism, be it from the Husserlian, Heideggerian, or Derridean corner. At the same time, Skirmishes provides an excellent introduction to the hottest debates in Speculative Realism and Object-Oriented Ontology, a speculative style of philosophy long foreclosed by the biases of mainstream continental thought, but which has turned in recent years into one of the most encompassing philosophies of our time, with a major impact on the arts, humanities, and architecture.

Part One considers four prominent books on speculative realism. In dialogue with Tom Sparrow’s The End of Phenomenology, Harman expresses agreement with Sparrow’s critique while taking issue with Lee Braver’s “transgressive realism” as not realist enough. Turning to Steven Shaviro’s The Universe of Things, Harman defends his own object-oriented model against Shaviro’s brand of process philosophy, while also engaging in side-debate with Levi R. Bryant’s distinction between virtual proper being and local manifestations. In the third chapter, on Peter Gratton’s Speculative Realism: Problems and Prospects, Harman opposes the author’s attempt to use Derridean notions of time and difference against Speculative Realism, in what amounts to his most extensive engagement with Derrida to date. Chapter Four gives us Harman’s response to Peter Wolfendale’s massive polemic in Object-Oriented Philosophy, which he shows is based on a failed criticism of Harman’s reading of Heidegger and a grumpy commitment to rationalist kitsch.

Part Two responds to a series of briefer criticisms of object-oriented ontology. When Alberto Toscano accuses Harman and Bruno Latour of “neo-monadological” and anti-scientific thinking, Harman responds that the philosophical factors pushing Leibniz into monadology are still valid today. When Christopher Norris mocks Harman for seeing merit in the occasionalist school, he shows why Norris’s middle-of-the-road scientific realism misses the point. In response to Dan Zahavi’s contention that phenomenology has little to learn from speculative realism, Harman exposes the holes in Zahavi’s reasoning. In a final response, Harman gives a point-by-point answer to Stephen Mulhall’s critical foray in the London Review of Books. Amidst these lively debates, Harman sheds new light on what he regards as the central bias of philosophical modernism, which he terms the taxonomical standpoint. It is a book sure to provoke lively controversy among both friends and foes of object-oriented thought.

Graham Harman is Distinguished Professor of Philosophy at the Southern California Institute of Architecture (SCI-Arc). He is the author of more than twenty books, most recently Art and Objects (Polity, 2020). He has also written more than three hundred articles and has been translated into twenty-three languages. Before joining SCI-Arc, Harman was Distinguished University Professor and Associate Provost for Research Administration at the American University in Cairo. He is a member of the faculty of the European Graduate School (EGS) and has also been a visiting faculty member at the University of Amsterdam, the University of Turin, and Yale University. Harman is editor-in-chief of the journal Open Philosophy, editor of the Speculative Realism book series at Edinburgh University Press, and (with Bruno Latour) co-editor of the New Metaphysics book series at Open Humanities Press. He is also a founding member of the Speculative Realism and Object-Oriented Ontology movements.

4 thoughts on “Skirmishes: With Friends, Enemies, and Neutrals”