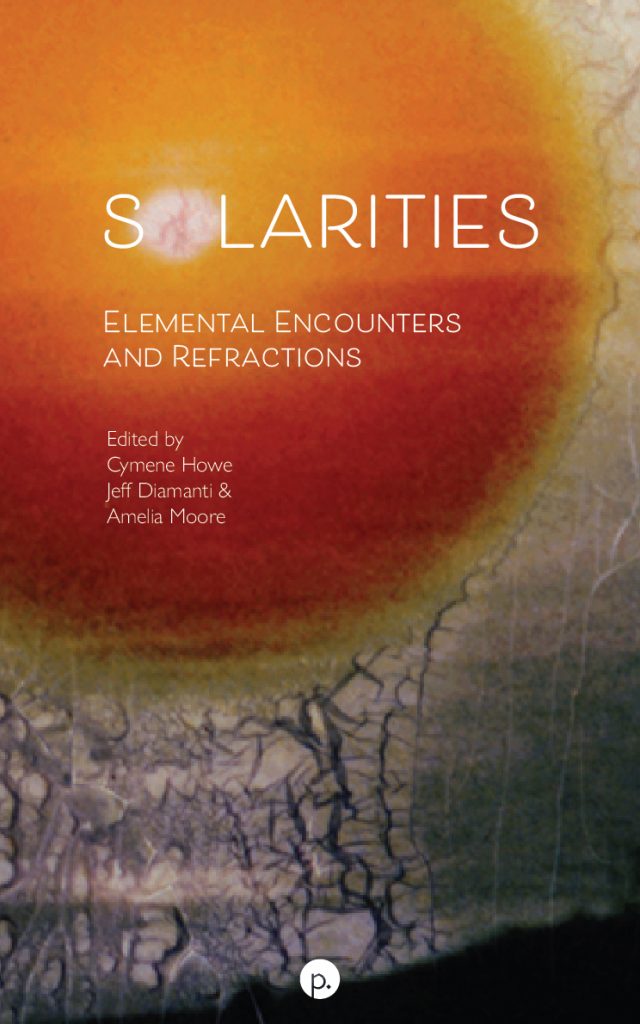 In this transdisciplinary collection we explore the physical, conceptual, and political possibilities materialized by “solarity”— a form of relation to the sun and its elemental force upon planetary life. We believe that a different set of questions become possible when the material specificities of solar become the compass for thought, prompting us to uncover our relationship to the sun. How does solarity materialize in the bodies and lives of humans and non-humans now and in the future? What can we learn if we no longer take the sun for granted? How do we continue to persist on a planet that is so intimately bound up in a state of love, fear, and dependence on the primary source of all living energy? Each of the essays in Solarities: Elemental Encounters and Refractions, written by both emerging and established scholars, take solar radiation as an interpretive lens that takes multiple forms, often transforming as it does so.

We draw inspiration from Black Ecologies, Indigenous philosophy, feminist STS, and more-than-human discussions in the human sciences, recognizing the phenomenological and ontological openings they make available. We appreciate solarity as an energy source (channeled through photovoltaic cells for example) but here we focus on the lives that solarity creates or impedes. Our experimental task is to find how solarities work their way into materials and processes across our work, seeking out the particular influences of solarity in making being/s. These relations are core to thinking the elemental conditions of solarity, since it is through particular forms of focalizing the sun that life is sustained, or made to wither, across the planet. In these ways the elemental condition of solarity is at once hyper particular and also shared across organic and inorganic bodies, conditioned by physical form and material composition. Throughout the collection we explore how solarity appears or recedes from view when we concentrate our attentions on it. We surface the existential omnipresence of the sun to open new thought possibilities, inspire new actions and refract new dimensions of socionatural encounter.

Cymene Howe is Professor of Anthropology at Rice University with a longstanding interest in how people and environments co-create one another. Her field research in the Americas (Nicaragua, Mexico, United States) the Arctic (Iceland, Greenland), and coastal cities (Cape Town and Honolulu) illustrates a widening field of human imprint on ecosystems. Her current research focuses on the interconnections between a melting Arctic and sea level rise in global coastal cities, with an attention to how water, transformed by a warming world, establishes novel links between distant places and populations. Her books include Intimate Activism (Duke 2013) and Ecologics: Wind and Power in the Anthropocene (Duke 2019) as well as two edited collections Anthropocene Unseen: A Lexicon (punctum books 2020) and The Johns Hopkins Guide to Critical and Cultural Theory. She co-produced the documentary film Not Ok: A Little Movie about a Small Glacier at the End of the World (2018) and was co-creator of the Okjökull memorial event in Iceland, the world’s first funeral for a glacier fallen to climate change.

Jeff Diamanti is Assistant Professor of Environmental Humanities (Cultural Analysis & Philosophy) at the University of Amsterdam. In 2016-17 he was the Media@McGill Postdoctoral Fellow in Media and the Environment where he co-convened the international colloquium on Climate Realism, the results of which appear in a book collection on  Routledge and a double issue of Resilience. His first book, Climate and Capital in the Age of Petroleum: Locating Terminal Landscapes (Bloomsbury 2021) tracks the political and media ecology of fossil fuels across the extractive and logistical spaces that connect remote territories like Greenland to the economies of North America and Western Europe. His new research, Bloom Ecologies, details the return to natural philosophy in the marine and atmospheric sciences studying the interactive dynamics of the cryosphere and hydrosphere in the North Atlantic and Arctic Ocean. He co-directs the ASCA Political Ecologies Seminar with Joost de Bloois, and with Amanda Boetzkes, he co-organizes “At the Moraine,” an ongoing research project on the political ecology of glacial retreat in the Arctic. With Fred Carter, he co-directs the FieldARTS arts and science residency in Amsterdam, NL.

Amelia Moore is Associate Professor of Marine Affairs at the University of Rhode Island. Trained as a sociocultural anthropologist at the University of California Berkeley, her focal research areas have spanned from science studies of tropical conservation biology to black marine ecologies to the anticolonial and antiracist examination of the practice of STEM in American academia. She has worked with government officials, nonprofit administrators, environmental activists, and a wide array of community members in The Bahamas, Indonesia, and the United States. Dr. Moore’s first book, Destination Anthropocene: Science and Tourism in The Bahamas, explores the fraught ways in which the ecological sciences and the tourism industry work together to transform the way people understand and unevenly profit from the islands of The Bahamas in an era of global environmental change.  She is currently collaborating on a documentary film, Decolonizing Science? (working title), that interrogates the unjust foundations of scientific research and explores attempts to move beyond the colonial structures of contemporary knowledge production.