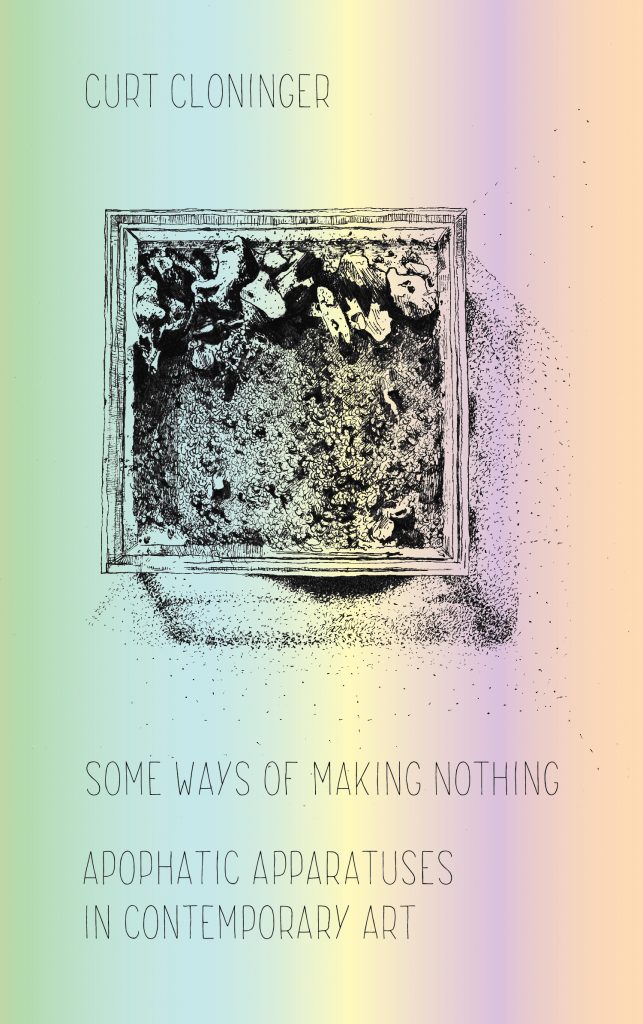 What if all works of art were better understood as functioning apparatuses, entangling their human audiences in experiences of becoming? What if certain works of art were even able to throw the brakes on becoming altogether, making nothings rather than somethings? What would be the ethical value of making nothing, of stalling becoming; and how might such nothings even be made?

Some Ways of Making Nothing: Apophatic Apparatuses in Contemporary Art borrows its understanding of apparatuses from quantum mechanics and the process philosophy of Alfred North Whitehead, and its understanding of nothing from apophatic (negative) theology. It then proposes a new way of understanding art, applying this understanding to artworks by Arakawa and Gins, Robert Fludd, David Crawford, Joshua Citarella, William Pope.L, and Haim Steinbach. Philosophy, physics, theology, and media theory are traversed and involved in order to understand art differently so that it might be made to matter more.

Curt Cloninger is a writer, artist, and Associate Professor of New Media at the University of North Carolina Asheville. His art has been featured in the New York Times and at festivals and galleries from Korea to Brazil. Exhibition and performance venues include Centre Georges Pompidou (Paris), Whitney Museum of American Art (New York), Granoff Center for The Creative Arts (Brown University), Ukrainian Institute of Modern Art (Chicago), Black Mountain College Museum + Arts Center (Asheville), and the internet. His essays have been published in Performance Research, Intelligent Agent, Mute, Paste, Tekka, Rhizome Digest, A List Apart, Textshop Experiments, and on ABC World News. Some Ways of Making Nothing is his fifth book. His writing and art may be accessed at lab404.com, playdamage.org, and deepyoung.org.

One thought on “Some Ways of Making Nothing: Apophatic Apparatuses in Contemporary Art”