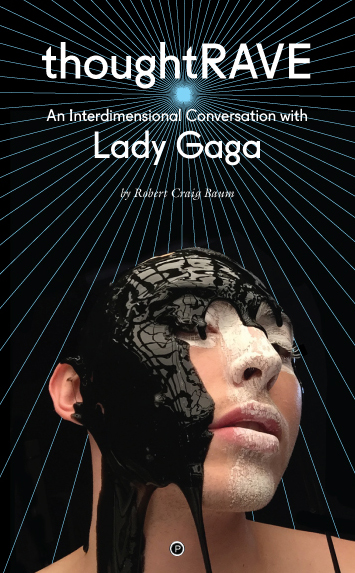 Music is a moral law. It gives soul to the universe, wing to the mind, flight to the imagination, and charm and gaiety to life and to everything.

Thoughtrave breaks all the boundaries of expectation, language, and social convention. This on-the-go dialogue is not some pre-scripted interview on the nightly news or trending TMZ featurette. It’s a conversation between two friends creating another dimension to their everyday lives inside social media.

My music, like this discussion, is a remapping and reactivating of the electrical pathways in the theoretical mind of the human that the remote user operates.

Thoughtrave is the immediate and most detailed archive of Lady Gaga’s emotional, intellectual, philosophical, and spiritual evolution, a reclaiming of her art (and humanity) from within the center of her celebrity during one of the most difficult transitions of her career: Summer 2013­–Fall 2014.

I don’t like being used to make money. I feel sad when I am overworked and that I just become a money making machine and that my passion and my creativity take a backseat. That makes me unhappy. So, what did I do? I started to say no. Not doing that. I don’t want to do that. I’m not taking that picture. Not going to that event. Not standing by that because that’s not what I stand for.

Thoughtrave marks perhaps the most important (and unconditional, unpublished, unencumbered) insights into the music industry, as well as into the personal battles that accompanied her transition from Stefani to Gaga. “It’s one of those rare moments in life when you ask a question of someone you’ve admired for many years and receive the most honest of answers leading both people into a relationship that was and remains one of the most important of my life,” says Baum, a professor, producer, composer, writer, editor, and activist for adjunct professors. As Baum explains to Stefani in one of the many interviews published here for the first time,

It’s uncanny for me to look back at 2008–2011 — when I was intensely meditating on the problem “Why is there any being at all?” — to find evidence of your intervention here with me…to find you, back then…before I knew you. It was almost as if I was playing the Bruce Willis character in Twelve Monkeys, overshooting my mark in time/space, aiming for this particular conversation but speaking through Ereignis (life gives) to a moment I (and many others) call “headphones on.”

As George Elerick writes in his Introduction to the book, “In Hand-to-Hand Battle for the Users,”

The book you hold in your hands easily falls into the category of a transgression. It’s as though we are breaking into somewhere we are not meant to be (like a rave) and are invited into the mind of one of today’s musical geniuses. Maybe we can even equivocate the experience to that of being a member of the paparazzi. Their whole mode of employment is based on breaking social codes and entering into the lives of everyday-people-turned-rock-stars. That’s what this book is, a disruptive invitation to break into the life and mind of Lady Gaga, the person, not just the persona.

Robert Craig Baum is the author of Itself (Atropos Press). He holds degrees from Catholic University (Philosophy), Dartmouth College (M.A. in Liberal Studies), and the European Graduate School (Philosophy and Communications). He is a philosopher, writer, producer, director, composer, and education activist whose work on behalf of at-will academic workers (adjuncts) is featured on Precaricorps. He lives in New York with his wife and four boys.

2 thoughts on “Thoughtrave: An Interdimensional Conversation with Lady Gaga”