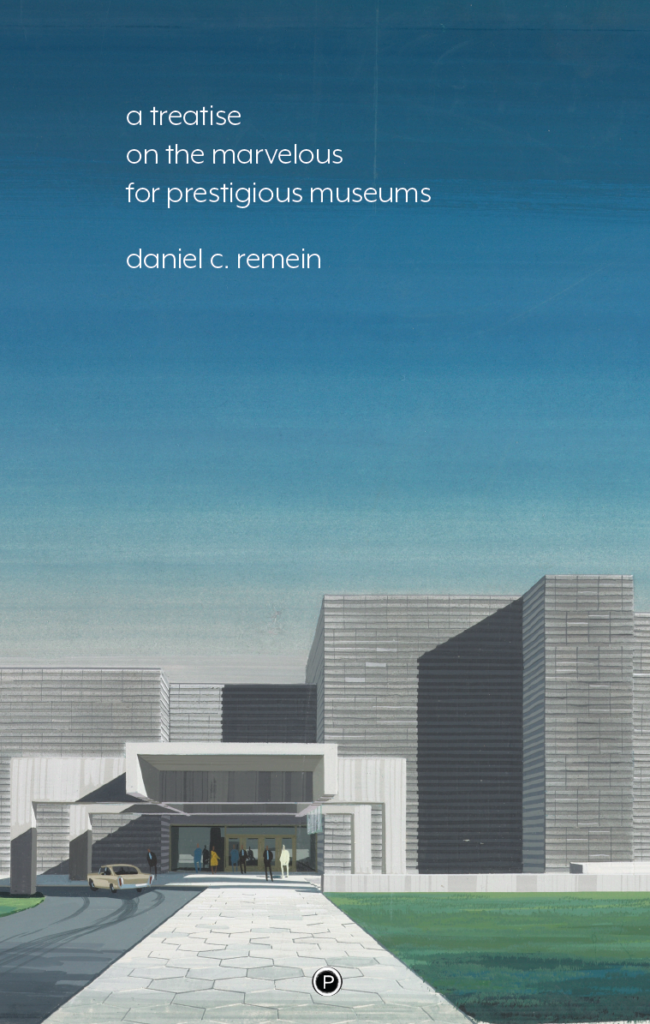 Imagine that Marx and Baudelaire have travelled together in a canto-shaped rocket ship to a space opera in the shape of a lyric. Then imagine that an epic fell off the moon in the shape of a museum, that words fell out of song and into the shape of apology, that utopia fell back to the world as it is with its toxified bodies, empty images, geologies, and stratifications. Daniel Remein’s A Treatise on the Marvelous for Prestigous Museums is a book that wants so much, it unwrites itself. This is a work for all who have ever asked for anything that isn’t this, and anything, too, that isn’t escape from this.

~ Anne Boyer, author of Garments Against Women, The Romance of Happy Workers

I have always come to Daniel Remein’s poetry forgetting what poetry is, and the poems remind me: reinvent from the ground of language the ground of possible languages. In Treatise, Remein uses syntactical simultaneity — all the words, all the time, can do whatever they want….Here, the past stands on its hind legs, turns the book sideways, rearranges the view…we receive a polymorphous perversity of textures: crushing blow of factory machines, soft underbelly of hare and fox, smooth architecture of the art museum, moondust. The ideal reader learns, like the infant, not to choose, but to let all cohabit in a simultaneity that sends us reverberating back and across the centuries, selves, objects, myths—all equally present in a state of constant, ethical relation.

Attending to our imbrications with rocket-towers, limestone, algae, fur, and poultices, Remein stitches in codices, lean-tos, leaks and other invented forms, not a Parnassian correspondence of high poetic metaphors, but the reticulated near-infinity of trans-taxon links that subtend and estrange our daily circuits, which in A Treatise on the Marvelous for Prestigious Museums, tends to be through the mid-century modernist outer space of medieval time and its affecting characters. Or into the closest festering chemical pool. Brilliant of the museums (once again) to have commissioned an untimely thinker like Remein for such a treatise!

Were poetry to mineralize around the Great Lakes as a trace in the trace of the Anthropocene and a team of Martian ecologists, geologists, archaeologists, literature and art historians came back to Earth to investigate, spelunking in the literary remains of Lorine Niedecker, Robert Duncan, Jack Spicer, Christopher Dewdney, Charles Olson, Gertrude Stein, Cecil Giscombe, and David Bowie, amongst others, Remein’s Treatise is what their report might look and sound like, as it beamed its findings back to the colony. This utterly strange and beautiful book holds together with an inner logic and temporality all its own, somewhere between venery and rocket science and love of the animal earth, affectively accumulated in entropological shifts between text, idea and image. Remein’s materials give us words for what it feels like, and feels for the language we find, inside the atmospheric weirding of our collective future.

Wrapped in modernist architect Marcel Breuer’s 1971 addition to the Cleveland Museum of Art, A Treatise on the Marvelous for Prestigious Museums considers the global ecological catastrophe by way of a speculative address to the art museums of the future, revisiting mid-century modes of site-specificity and speculative collage as utopian practices for the present. Written over the course of a decade, the book insists on the continuing importance of the New American Poetry and Language poetics, and includes work in the tradition of the ongoing serial poem and documentary poetics.

This full color edition reproduces the maps, diagrams, and facsimiles that adorn the treatise.