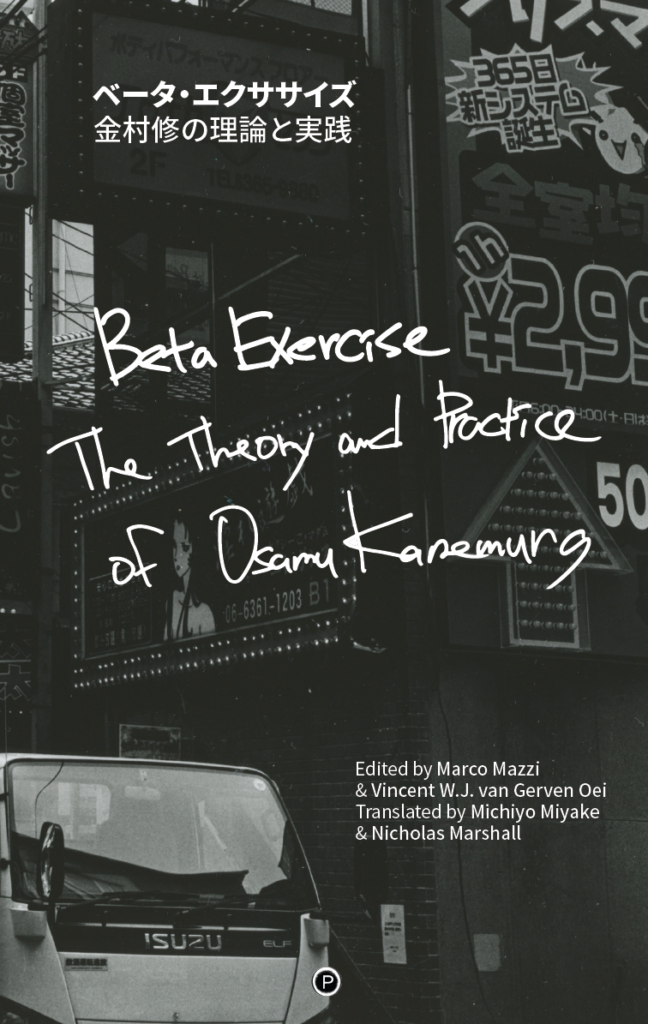 Beta Exercise: The Theory and Practice of Osamu Kanemura is the first bilingual (Japanese-English) book to provide an overview of the theoretical work of Japanese photographer and video artist Osamu Kanemura, a unique talent and voice in the world of avant-garde contemporary photography.

The opening essay “Life Is a Gift” meditates on the transformation of human life into an exchangeable commodity and the abstraction that entails. “Essay 01” develops Kanemura’s idea of photographic “technique” in an era when such techniques have become accessible to all, radically undermining the importance of human subjectivity in the process of capturing the photographic image: “We can say that modern technology constitutes photographic technique.” Instead, Kanemura argues, extra-technical elements such as concept and vision will have to compensate for the expression of individuality that technique is no longer able to convey.

Taking cues from Kiyoshi Kurosawa and Karlheinz Stockhausen, the essay “Dead-Stick Landing” develops Kanemura’s theory of the moving image as mechanical system, solely governed by an “on-off switch,” while “Essay 02” develops these ideas into a consideration of cinematic time and the experience of boredom in cinema as the result of a truthful “loyalty” expressed to machines, and not to stories.

The essays are accompanied by an extensive two-part interview with Italian photographer Marco Mazzi, touching upon topics ranging from the technical aspects of Kanemura’s equipment, the concept of non-editing, and the destruction of the frame to the similarity between Mao’s dialectics and the camera, the presence of the human figure as trace, and the politics of photographing Tokyo.

Osamu Kanemura was born in 1964 in Tokyo, Japan. In the 1980s, after performing as a punk-rock musician, he entered the film school “Image Forum” in Tokyo where he made several 16 mm experimental films. In 1990 he entered the Tokyo College of Photography, and before graduating in 1993, he was invited to the Photography Biennale in Rotterdam, Netherlands. Since then, he has held numerous solo exhibitions and has participated in various group shows in Japan and abroad. His photographs are found in public collections, including the Museum of Modern Art (MoMA), the Art Institute of Chicago, the National Museum of Modern Art, Tokyo, and the Yokohama Museum of Art. Besides his well-recognized black-and-white photographs of cityscapes, Kanemura also continues to work on videos and moving images.

Nicholas Marshall is an editor and translator based in Sydney, Australia. He holds a PhD in applied linguistics and worked as a professor of English for Academic Purposes at Meiji University in Tokyo.

Michiyo Miyake is a Japanese translator and writer living in Sydney, Australia. As a translator, she has worked on various art projects by Cerith Wyn Evans, Eric Baudelaire, and Marco Mazzi. She also translates British and American literature into Japanese and has published a wide variety of articles. Her recent publications include a translation of the Harlem Renaissance writer Carl Van Vechten’s work into Japanese.

Marco Mazzi is an Italian photographer living and working in Tokyo, Florence, and Tirana, Albania. Mazzi studied Contemporary Literature at the University of Florence and ha also studied Japanese avant-garde art and visual poetry in Japan. His work has been exhibited at the 798 Art District in Beijing (China), the Komaba Art Museum of Tokyo (Japan), and the Centro per l’arte contemporanea Luigi Pecci in Prato (Italy). In 2010, he took part in the exhibition Il medium disperso (MLAC, Rome), together with Keren Cytter and Clemens von Wedemeyer. In 2008, Mazzi founded the non-profit organization Relational Cinema Association within the University of Waseda in Tokyo. Mazzi was photographer-in-residence at The Department of Eagles (Tirana, Albania) for the conference Pedagogies of Disaster and the project Lapidari and he was the stage and still photographer for Armando Lulaj’s Recapitulation (2015), commissioned by the 2015 Venice Biennale’s Albanian Pavilion.

Vincent W.J. van Gerven Oei holds a PhD in Media & Communications from the European Graduate School and another PhD in Modern Thought from the University of Aberdeen. He is a philologist and co-director of punctum books. He is a specialist in Old Nubian and co-editor-in-chief of Dotawo. Recent publications include Cross-Examinations (MER. Paper Kunsthalle, 2015) and the edited volumes Going Postcard: The Letter(s) of Jacques Derrida (punctum, 2017) and Allegory of the Cave Painting (Mousse, 2015; with Mihnea Mircan). His three-volume work Lapidari (punctum, 2015) provides the first complete overview of socialist monumentality in Albania. As a translator, Van Gerven Oei works mostly with anonymous Medieval Nubian scribes and more recent authors such as Jean Daive, Hervé Guibert, Werner Hamacher, Dick Raaijmakers, Avital Ronell, and Nachoem M. Wijnberg. His scholarly work has appeared in ArtPapers, Glossa, postmedieval, Theory & Event, and tripwire, among other venues.

2 thoughts on “Beta Exercise: The Theory and Practice of Osamu Kanemura”