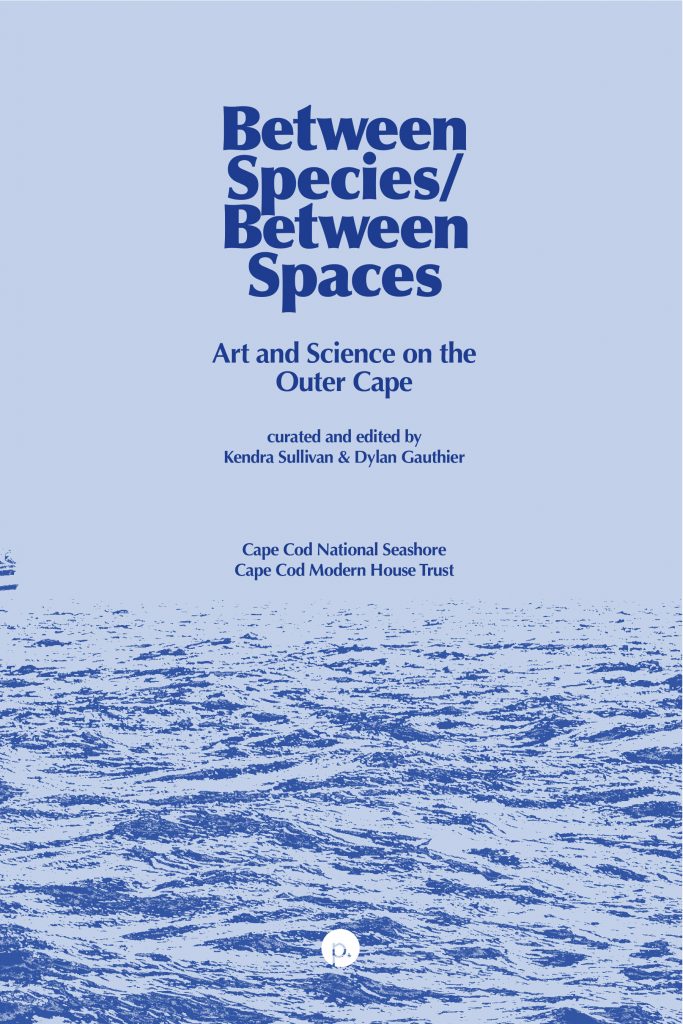 Between Species/Between Spaces assembles text and images resulting from a pilot artistic research residency hosted by the Cape Cod Modern House Trust and the Cape Cod National Seashore in Cape Cod, MA. Artists in the book reflect on the geological forces that are reshaping the landscape and ecology of the Outer Cape which illuminate and to some degree mirror the broader global dynamic of instability, loss, and transition we are facing as a result of anthropogenic climate change. The book collects new artworks in a variety of media by ten contemporary artists whose work investigates the relationships between ecological crisis, communities, individual subjects, and the environment – the result of collaborations between visiting artists and researchers at the NPS field station in the National Seashore.

An introductory essay by Peter McMahon, founding director of the Cape Cod Modern House Trust, reflects on the Cape as a site of groundbreaking collaborations between artists, architects, designers, and scientists in the middle of the 20th century, led by visionaries Serge Chermayeff, Bernard Rudofsky, Gyorgy Kepes, and Marcel Breuer. An epistolary essay by NPS cartographer Mark Adams, who is also a painter, meditates on the Outer Cape as a site of community with an uncertain future; Adams’ own work has indicated that a predicted 4000 year timeframe for the Cape’s dunes and sandy shores to erode entirely into the sea may in fact be accelerating under climate change. Contributions by Adams, along with artists Jean Barberis, Joshua Edwards, Marie Lorenz, Nancy Nowacek, Jeff Williams, Lynn Xu, and Marina Zurkow and artist/curators Kendra Sullivan and Dylan Gauthier, who organized the residency and culminating exhibition, present multimodal research into species extinction, terraforming, ecological restoration and regenerative practices, as a window onto the past, present, and future of this unstable place.

Kendra Sullivan (b.1982) and Dylan Gauthier (b.1979) are a Brooklyn-based artist duo focused on deep research, eco-poetics, collaboration, public engagement, and the built environment. They co-founded SUNVIEW LUNCHEONETTE, a space for art, politics, and action in Greenpoint, Brooklyn in 2012, and are founding members of the eco-art collective Mare Liberum. Gauthier holds an MFA from Hunter College, and is faculty at Parsons/The New School. Sullivan is Director of the Seminar on Public Engagement and Collaborative Research at the CUNY Graduate Center, and is currently a PhD candidate in English (Environmental Humanities) with an MA in Sustainability and Environmental Education.