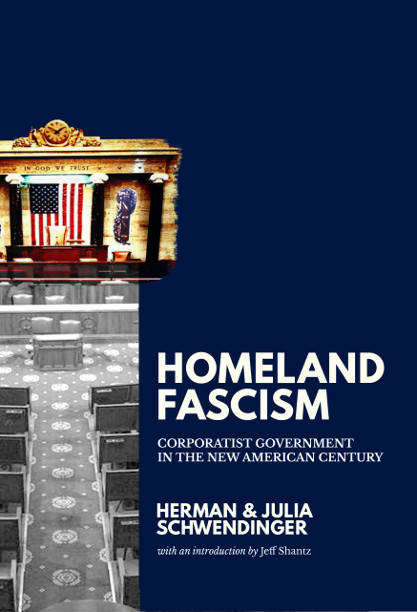 This has been the prevailing sentiment about the possible emergence of fascism in the United States since the rise of international fascism in the 1930s.
Yet there are signs that it may already be happening, and at the highest levels of government…

In their copiously researched and documented work the Schwendingers outline the structural transformations, policies, and practices that raise the prospect of fascist governance in the 21st Century US. They show that a homeland fascism has significant supports within the framework of American liberal democracy. This is an important analysis in a context in which concerns about fascist demagoguery and far right mobilization appear to be growing in the US and beyond.

Julia and Herman Schwendinger were among the main participants in the Berkeley School of Criminology. Their innovative works have made crucial contributions to the development of radical criminology, particularly in areas of the exploitation of women and women’s resistance, adolescent subcultures, surveillance, class analysis, and sociological theory. Among their books are The Sociologists of the Chair, Adolescent Subcultures and Democracy, and Rape and Inequality. Their significant innovations in criminology are recognized with their inclusion in the text Fifty Key Thinkers in Criminology (Routledge, 2013). Activists as well as academics, Julia helped found the first rape resistance crisis center in the US. Both were actively involved in anti-racist, anti-war, feminist, labor, and community struggles over the course of decades (some of which are described in Who Killed the Berkeley School). Both taught for years at SUNY New Paltz, as well as numerous visiting professorships. Julia and Herman were married for almost 68 years, true life partners and intellectual collaborators. Julia passed away in 2013 but her profound legacy continues.