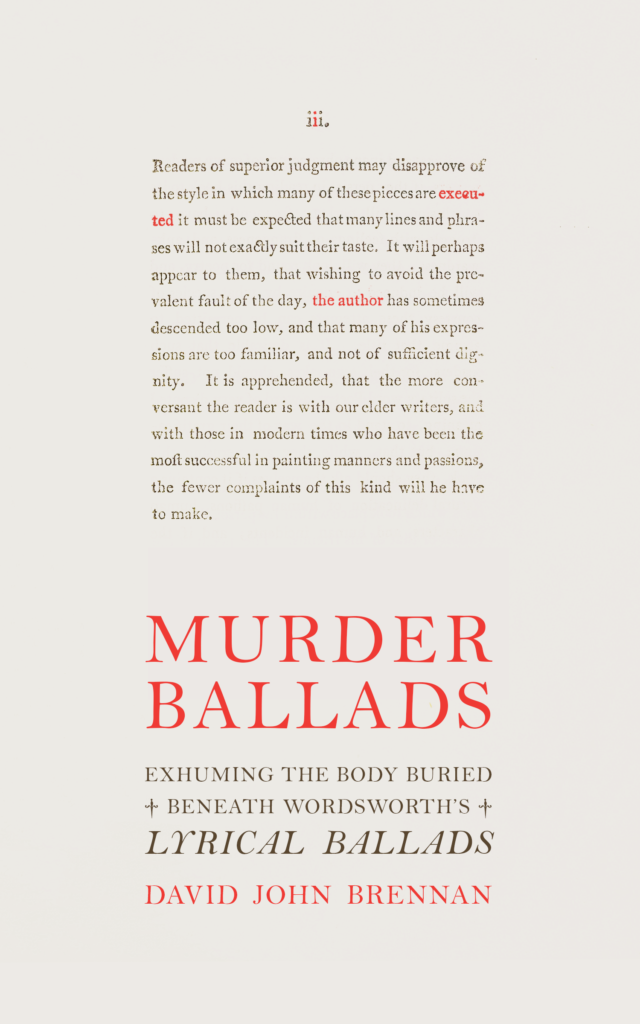 England, 1798. You buy a book of poems. An anonymous volume. You carry it home in your jacket pocket, set it on a table in your sitting room while you munch a midday meal of meat and bread. . . .

In 1798, William Wordsworth and Samuel Taylor Coleridge were engaged in a top secret experiment. This was not, as many assume, the creation of a book of poetry. A book emerged, to be sure—the landmark Lyrical Ballads. But in Murder Ballads, David John Brennan posits that the two poets were in fact pursuing far different ends: to birth from their poems a singular, idealized Poet.

Despite their success, such Frankensteinian pursuits proved rife with consequence for the men. Doubts and questions plagued them: What does it mean to be a poet if your work is not your own? Who is best fit to lay claim to a parcel of poetic property that was collaboratively crafted and bequeathed to a fictitious Poet? How does one kill a Poet born of one’s own hand?

Blending critical examination with jocular playlets-in-verse featuring the authors of the two books in baffled conversation, Murder Ballads reopens a 200-year-old cold case that never received a proper investigation: Who was the first true Author of Lyrical Ballads, and how exactly did he die?

David John Brennan’s books include the poetry collections The White Visitation and The Family Flamboyant. He teaches at James Madison University.

One thought on “Murder Ballads”