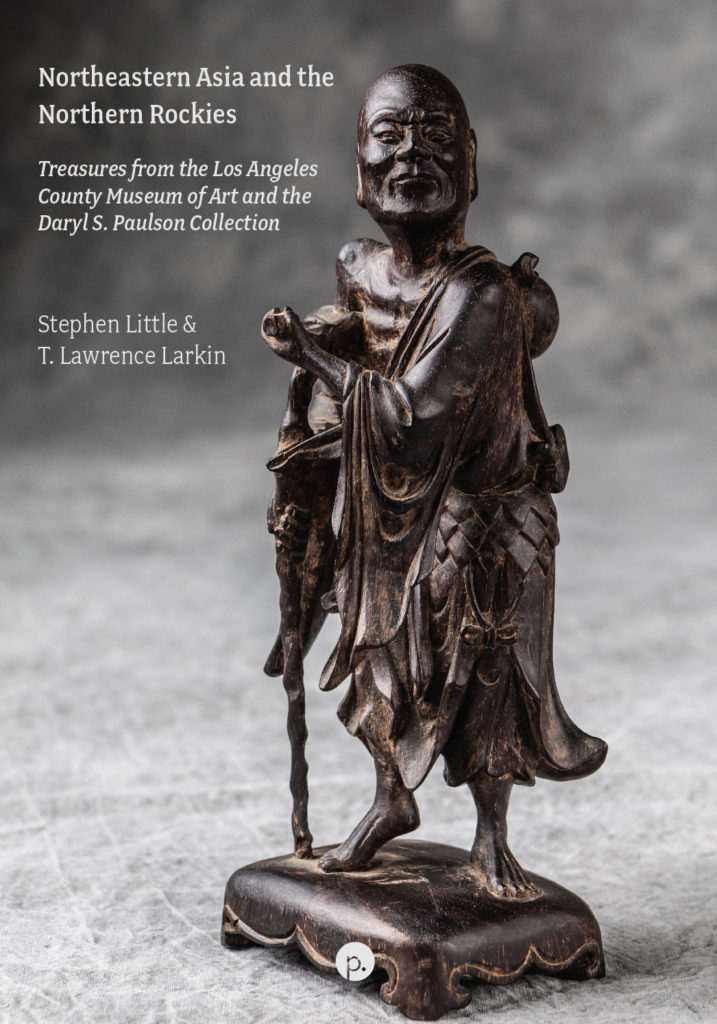 The philosophical ties between Northeastern Asia and the Northern Rockies as represented in a selection of fine art—including Daoist nature deities and immortals, Confucian scholar brushes and inkstones, and Buddhist guardian kings and compassionate bodhisattvas—have never been explicated. This catalog lays the groundwork for a serious discussion of trans-Pacific acculturation, first by explaining the fundamentals of Daoism, Confucianism, and Buddhism in reference to rare works of art produced in China, Korea, and Japan between the Tang Dynasty and the Qing Dynasty; second by assessing the prevalence of these philosophies as indicated by photographs of temples, shrines, deities, and rituals recreated in Idaho, Montana, Wyoming, and Colorado between the Civil War and World War I.

Drawing from the collections of the Los Angeles County Museum of Art and the Daryl S. Paulson Collection in Bozeman, Montana, Asian art curator Stephen Little offers three brief essays that distinguish the philosophies according to their founding values, each followed by several object case studies that illustrate, elaborate, and develop those ideals. Mining the photographs of state historical societies of Boise, Helena, Cheyenne, and Denver, Euro-American art professor T. Lawrence Larkin offers one long essay that compares religious values and artistic forms on both sides of the Pacific followed by some object entries that highlight migrant and settler culture in the Inner West. Profusely illustrated with new color and rarely seen black-and-white images, containing useful maps, chronologies, and index, Northeastern Asia and the Northern Rockies is an invaluable reference for the general reader and an important resource for the regional scholar.

An authority on Asian art, Stephen Little grew up in Southeast Asia and the Middle East. He received his BA from Cornell University (1975), MA from the University of California—Los Angeles (1977), and PhD from Yale University (1987). He served as Curator of Chinese Art at the Asian Art Museum of San Francisco (1977–1982) and the Cleveland Museum of Art (1987–1989); Curator of Asian Art at the Honolulu Academy of Arts (1989–1994); Pritzker Curator of Asian Art at the Art Institute of Chicago (1995–2002); and Director of the Honolulu Academy of Arts (2003–2010) before joining LACMA’s curatorial staff in 2011. His publications include Chinese Ceramics of the Transitional Period (1983), Visions of the Dharma: Japanese Buddhist Paintings and Prints in the Honolulu Academy of Arts (1991), Spirit Stones of China (1999), Taoism and the Arts of China (2000), Chinese Paintings from Japanese Collections (2014), 17th-Century Chinese Paintings from the Tsao Family Collection (2016), Beyond Line: The Art of Korean Writing (2019), and Where the Truth Lies: The Art of Qiu Ying (2020). Little has taught at the University of Virginia, the University of Chicago, the University of London, Harvard University, UCLA, and Occidental College.

T. Lawrence Larkin is Professor of Seventeenth- to Nineteenth-Century European Art at Montana State University, Bozeman. He received his MA and PhD from the University of California—Santa Barbara (1994, 2000). He has published on aspects of early modern French and American art and culture, with a three-fold interest in the portrait patronage and mythical permutations of Queen Marie-Antoinette, the trans-Atlantic political culture of French, British, and American governments during the revolutionary and imperial eras, and now the trans-Pacific philosophical culture of Chinese and Japanese migrants during the postbellum period. His books include an edited volume, Politics & Portraits in the United States & France during the Age of Revolution (Smithsonian Institution Scholarly Press, 2019), and two monographs, In Search of Marie-Antoinette: Stefan Zweig, Irving Thalberg, and Norma Shearer (Palgrave-Macmillan, 2019) and What Ever Happened to the U.S. Congress’s Portraits of Louis XVI and Marie-Antoinette? (American Philosophical Society Press, 2021). Larkin has taught Asian art for several years and is writing a memoir that in part considers America’s social and cultural outreach initiatives to China in the 1970s and ’80s.