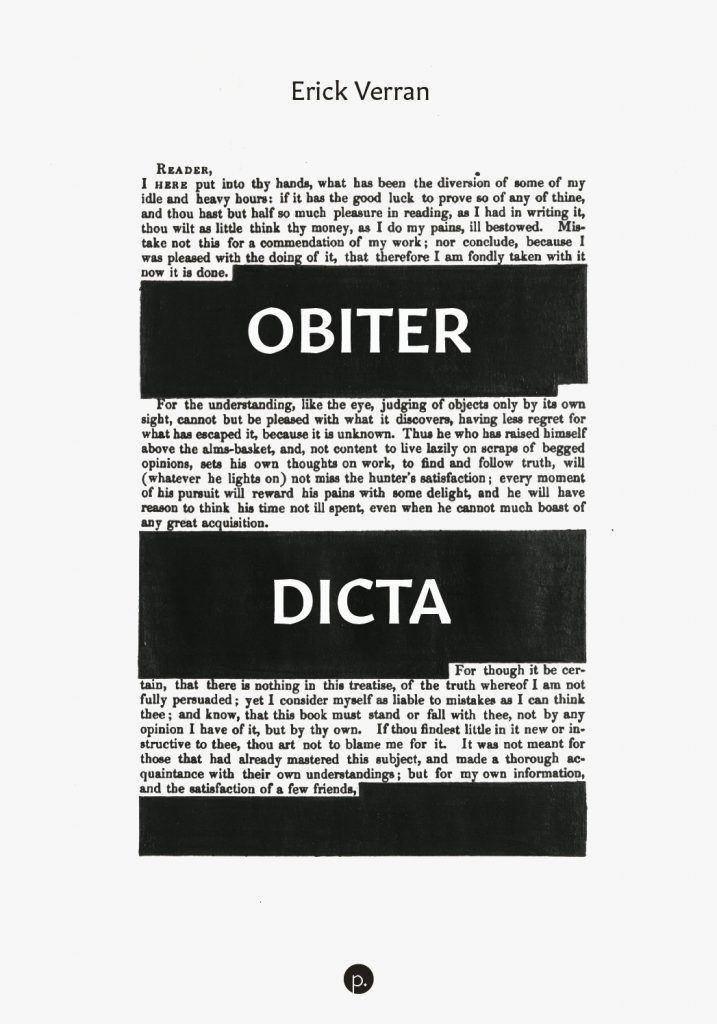 Stitched together over five years of journaling, Obiter Dicta is a commonplace book of freewheeling explorations representing the transcription of a dozen notebooks, since painstakingly reimagined for publication. Organized after Theodor Adorno’s Minima Moralia, this unschooled exercise in aesthetic thought—gleefully dilettantish, oftentimes dangerously close to the epigrammatic—interrogates an array of subject matter (although inescapably circling back to the curiously resemblant histories of Western visual art and instrumental music) through the lens of drive-by speculation. Erick Verran’s approach to philosophical inquiry follows the brute-force literary technique of Jacques Derrida to exhaustively favor the material grammar of a signifier over hand-me-down meaning, juxtaposing outer semblances with their buried systems and our etched-in-stone intuitions about color and illusion, shape and value, with lessons stolen from seemingly unrelatable disciplines.

Interlarded with extracts of Ludwig Wittgenstein but also Wallace Stevens, Cormac McCarthy as well as Roland Barthes, this cache of incidental remarks eschews what’s granular for the biggest picture available, leaving below the hyper-specialized fields of academia for a bird’s-eye view of their crop circles. Obiter Dicta is an unapologetic experiment in intellectual dot-connecting that challenges much long-standing wisdom about everything from illuminated manuscripts to videogames and the evolution of European music with lyrical brevity; that is, before jumping to the next topic.

Erick Verran is a writer and poet. Currently an MFA candidate in Creative Writing at the University of Florida, his poetry last appeared in the Massachusetts Review, Little Star, Gargoyle Magazine, the New England Review of Books, and City of Notions: An Anthology of Contemporary Boston Poems, while short dispatches on overlooked ekphrasis in Virginia Woolf’s Mrs. Dalloway and a critical explication of the dialogues in Samuel Beckett’s Waiting for Godot have been respectively published in the Virginia Woolf Miscellany and Contemporary Aesthetics.