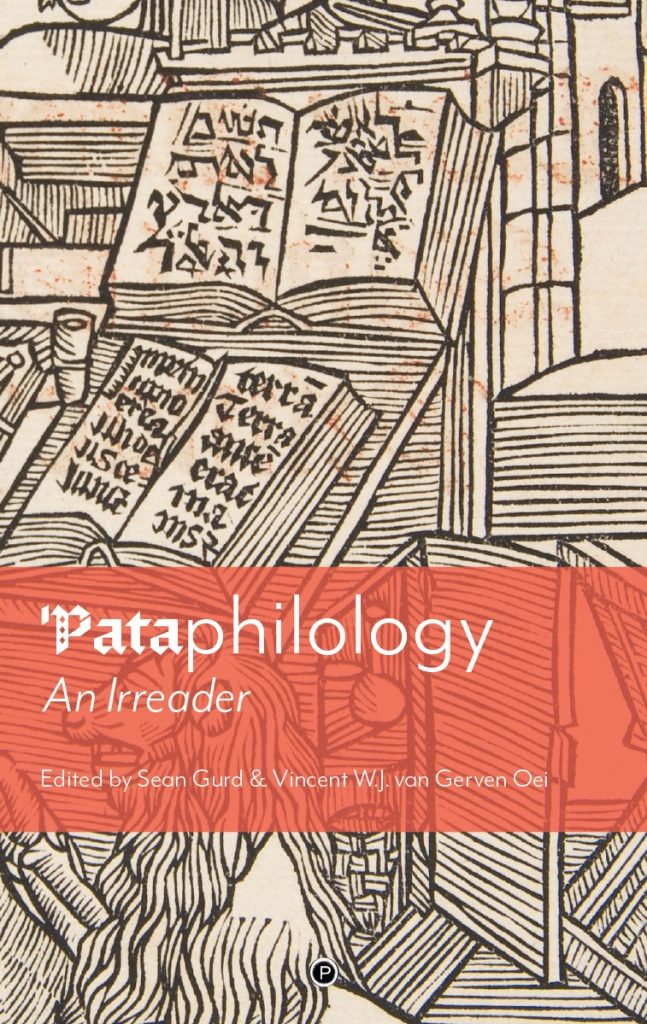 If metaphysics is the hinge between physics and pataphysics, pataphilology is the sand, dirt, and dust (or the ::) that make it creak.

1883. Jean-Pierre Brisset realizes that a close phonological analysis of spoken words will demonstrate that the French language, and therefore the human species, was evolved from frogs.

1896. Consulted as an expert in linguistics and comparative philology, Ferdinand de Saussure reports that the passages of Martian Language transcribed during the “sonambulistic glossolalias” of one (pseudonymously named) “Hélène Smith” (in fact Müller) may contain a few roots related to those found in Sanskrit and other Indo-Aryan languages.

1897.  Using recognized techniques of historical reconstruction and close reading, Samuel Butler proposes that the composer of the Odyssey was not Homer but Nausikaa, a character in the epic.

What do the bizzare etymologies of Jean-Pierre Brisset, made-up languages for literary fiction, The Dialectic of Enlightenment, Latin grammarians, Horace’s Epodes, and the Papyrus of Ani have in common? Absolutely nothing. Yet, taken together they provide an unusually coherent picture of a hitherto unacknowledged non-tradition of linguistic investigation. At these moments, particularly within the traditions of European writing which can loosely be termed “avant-garde,” philology goes rogue, hearkening to unearthly imperatives and barely comprehended intimations, and producing results well beyond those generated by more respectable – and supposedly more grounded – philological endeavors. ‘Pataphilology: An Irreader seeks to document and analyze such moments of philological speculation, invention, and détournement.

In using the term ‘pataphilology, Gurd and van Gerven Oei are not proposing a facile analogy with ‘pataphysics, where ‘pataphilology would be philology’s wacky twin, always out for a lark, never doing anything real. This would presuppose an operation (even if parenthetical) on philology analogous to a shift from physics to ’pataphysics, something which Alfred Jarry, to whom this volume owes the latter neologism, appears to contradict in his initial definition: “Pataphysics […] is the science of that which is superinduced upon metaphysics, whether within or beyond the latter’s limitations, extending as far beyond metaphysics as the latter extends beyond physics.” Any way you cut it, ‘pataphysics is a physics that demands — or, better, that relies on — an utmost philological sensitivity to writing, unheard etymologies, unstable translations, incomplete formalizations, and haphazard decryptions. This volume seeks, then, to document how philological practices — no matter how non-standard, disreputable, or academically useless — have played a role in the production of avant-garde literature and knowledge, as well as forgotten, alternative, or fictitious scholarly projects.

Ranging from the papyrus of Ani to the future languages of speculative fiction, from the fictional tablets of Armand Schwerner to the Attic Nights of Aulus Gellius, from Horace to Lacan, ’Pataphilology: An Irreader is a cabinet of philological curiosity — and a map of the ever-changing constellations that emerge when human language loses its chains.

The Papyrus Of Ani: Egyptian Book Of The Dead. A Prototype Of Ekphrastic Translation of Plate 1, Chapters 1–5 (Along with a Brief Note to Explain Its Rudiments) – Steve McCaffery

The Paraphilologist as ’Pataphysician – Erik Gunderson

Sean Gurd is Professor of classical studies at the University of Missouri, Columbia. He has written Iphigenias at Aulis: Textual Multiplicity, Radical Philology (Cornell, 2006); Work in Progress: Literary Revision as Social Performance in Ancient Rome (Oxford, 2012), and Dissonance: Auditory Aesthetics in Ancient Greece (Fordham, 2016). He also edited Philology and its Histories (Ohio State, 2010).

Vincent W.J. van Gerven Oei received a PhD in Media & Communications from the European Graduate School and another PhD in Modern Thought from the University of Aberdeen. He is a philologist and co-director of open-access publishing platform punctum books. He is a specialist in Old Nubian and co-editor-in-chief of Dotawo. Monographs include A Reference Grammar of Old Nubian (Peeters, forthcoming 2020) and Cross-Examinations (MER. Paper Kunsthalle, 2015). His three-volume work Lapidari (punctum, 2015) provides the first complete overview of socialist monumentality in Albania. As a translator, Van Gerven Oei works mostly with anonymous Makuritan Nubian scribes and more recent authors such as Jean Daive, Hervé Guibert, Werner Hamacher, Dick Raaijmakers, Avital Ronell, and Nachoem M. Wijnberg. His scholarly work has appeared in Afterall, Glossa, The Journal of Juristic Papyrology, postmedieval, and Theory & Event, among other venues.