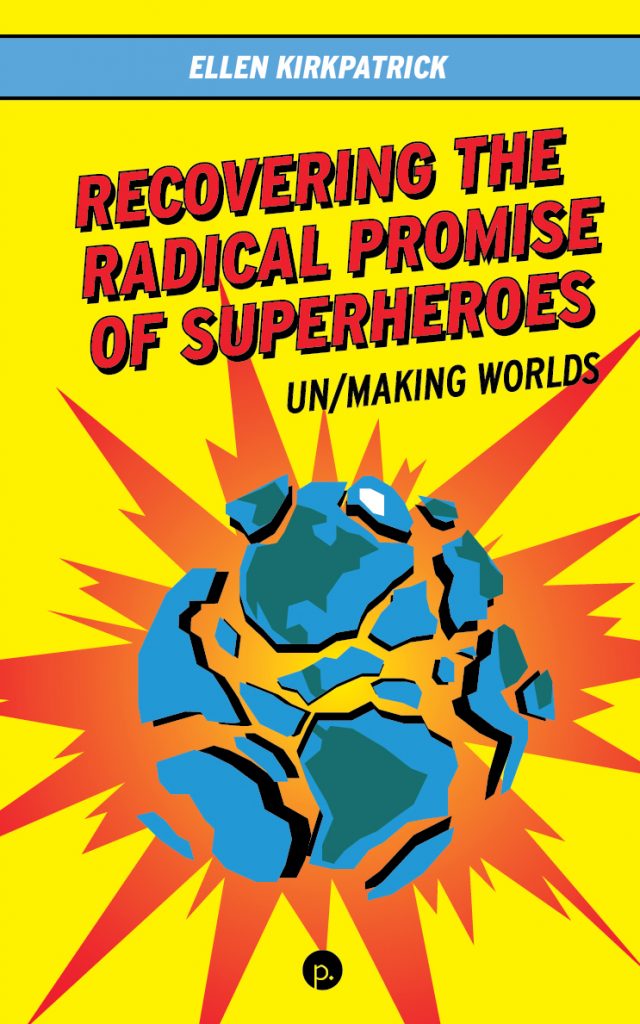 “The superhero genre contains multitudes! Though it too often reverts back to its most conservative form, Ellen Kirkpatrick’s tour de force book makes the case for the radical potential and transformative power of the superhero, a trope she traces across media and history, armed with state of the art theories of genre, world-making, and the civic imagination. I could not be more excited to see such a book coming out in the current moment where there are superheroes, seemingly, everywhere we look.” ~ Henry Jenkins, author of Comics and Stuff

Superhero meaning-making is a site of struggle. Superheroes (are thought to) trouble borders and normative ways of seeing and being in the world. Superhero narratives (are thought to) represent, and thereby inspire, alternative visions of the real world. The superhero genre is (thought to be) a repository for radical or progressive ideas. In the superhero world and beyond, much is made of the genre’s utopian and dystopian landscapes, queer identity-play, and transforming bodies, but might it not be the case that the genre’s overblown normative framing, or representation, serves to muzzle, rather than express, its protagonists’ radical promise? Why, when set against otherwise unbounded, and often extreme, transformation—human to machine, human to animal, human to god—are certain categories seemingly untouchable? Why does this speculative genre routinely fail to fully speculate about other worlds and ways of being in those worlds? For all their nonconformity, superhero stories do not live up to the idea of a radical genre, in look, feel, or tone. The mainstream American superhero genre, and its surrounding discourse, tells and facilitates an astonishingly seamless tale of opposing ideologies. But how?

Recovering the Radical Promise of Superheroes: Un/Making Worlds serves as an answer to this question, a speculative response detailing not so much a hunt for genre meaning as a trip through a genre’s meaningscape. Looking anew at superhero meaning-making practices allows a distinct way of thinking about and describing the creative, formal, and ideological condition of the genre and its protagonists, one removed from corralling binaries, one foregrounding the idea of a synergy—often unseen, uneasy, and even hostile—between official and unofficial agents of superhero meaning and one reframing familiar questions: What kinds of meaning do superhero texts engender? How is this meaning made? By whom and under what conditions? What processes and practices inform, regulate, and extend superhero meaning? And finally, superhero narratives present a new question: How might we reimagine its agents, surfaces, and spaces? Centering the experiences and practices of excluded and marginalized superhero fans, Recovering the Radical Promise of Superheroes reveals that genre meaning is not lodged in one place or another, neither in its official creators or fans, nor in “black and white” conservatism or in a “rainbow” of progressive possibilities. Nor is it even located somewhere in the in-between; it is instead better conceived of as an antagonistic, in-process nexus of meaning undergirded by systems of power.

Ellen Kirkpatrick, based in northern Ireland, is an activist-writer with a PhD in Cultural Studies. In her work, she writes about activism, pop culture, fan cultures, and the transformative power of storytelling. She has published work in a range of academic journals and media outlets and her writings and work can be found at The Break and on Twitter @elk_dash.