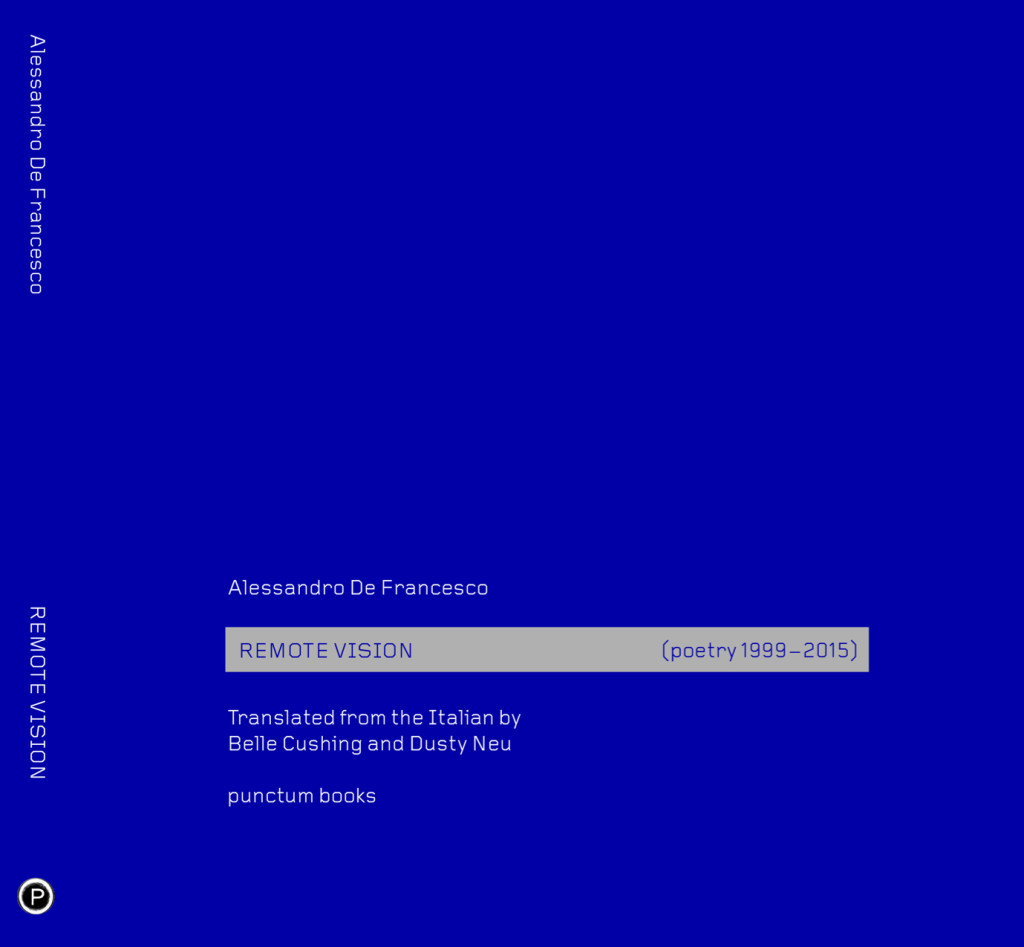 Remote Vision represents, in English and Italian, the most significant works in poetry and conceptual writing produced by Alessandro De Francesco to date. It is both a coherent book and the most exhaustive collection of his poetry ever published in any language. All sections have been rearranged for this publication, with each one containing the complete English text followed by the complete Italian version. The texts have been beautifully translated by poets and Brown University alumni Belle Cushing and Dusty Neu, under the coordination of the acclaimed poet and Comparative Literature scholar Forrest Gander. Remote Vision condenses and presents under a new light the conceptual and emotional intensity of Alessandro De Francesco’s poetry.

An Italian-only edition of Remote Vision, under the title La visione a distanza, was published in 2018 by Arcipelago Itaca.

Alessandro De Francesco is a poet, artist and essayist born in Pisa, Italy, in 1981. He currently resides in Brussels, Belgium, and Basel, Switzerland. Increasingly influential on an international scale, his work—entirely based on written and spoken language—spans from poetry to sound, visual and conceptual art. In 2009 Alessandro founded and until 2011 directed the “atelier de création poétique” at the École Normale Supérieure in Paris and since 2008 he has been a visiting professor of poetry and contemporary art at the European Graduate School. Alessandro has been invited to the Kelly Writers House at U-Penn, the Graduate College at CUNY, the Fondation Louis Vuitton, the Centre Pompidou and the CNEAI in Paris, the MAMCS in Strasbourg, the STEIM in Amsterdam, the Berlin University of the Arts, and elsewhere for readings, performances or exhibitions. Alessandro holds a PhD in Poetics from the University of Paris-Sorbonne and is currently an associate member of the Research Centre for Visual Poetics at the University of Antwerp, Belgium. His publications include Lo spostamento degli oggetti (Verona: Cierre Grafica, 2008), Redéfinition (Paris: MIX., 2010), Augmented Writing (Rome: La Camera Verde, 2013), and Continuum (Tirana/The Hague: Uitgeverij, 2015).