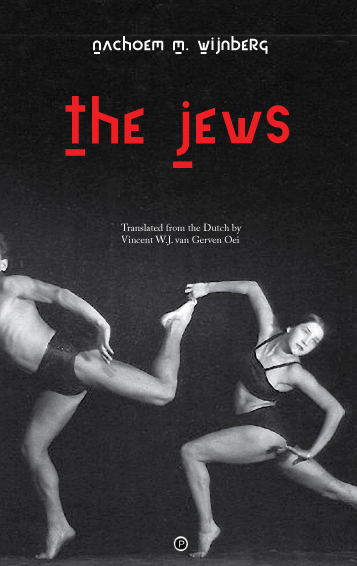 The Jews is an anti-historical thriller in the form of a Talmudic tragicomedy, taking place sometime during the Second World War. Stalin and his Minister of Security Beria are worried about the political developments in Germany, where Martin Heidegger has replaced Adolf Hitler as Chancellor of the Third Reich. Suspecting that the Frankfurt School, headed by Vice-Chancellor Walter Benjamin, has masterminded this takeover, he dispatches two Jewish actors, Salomon Maimon and Natalia Goncharova, to investigate the situation in the hope of uncovering the extent of the Jewish conspiracy.

Upon arrival in Berlin, Maimon and Goncharova are received by Benjamin, who introduces them to Heidegger. The latter has stopped speaking to anyone except his mother since his rise to power, and Benjamin holds long speeches on the history of theater, the law, God, the royal gods and the old goddesses. Eventually, prodded by his mother, Heidegger marries Goncharova, surrounded by a merry audience.

The novel ends on a plain somewhere between Moscow and Berlin, where the final battle for Jerusalem is being waged. In front of the entrance of a camp, Maimon and Benjamin are joined by a group of old Jews arriving by train, bringing the news of Stalin’s death by circumcision. They reenact scenes from the Old Testament while Jerusalem is burning. Did the world to come finally arrive?

Nachoem M. Wijnberg (Amsterdam, 1961) is a Dutch poet and novelist who has been acclaimed as one of the foremost Dutch authors of the last decades. His first book of poetry De simulatie van de schepping (The Simulation of the Creation) was published in 1989 and nominated as a best debut. His work went on to receive a series of Dutch and Belgian awards, including the highly prestigious 2009 VSB Prize for the best book of poetry published in the Netherlands for Het leven van (The life of) and the Gedichtendagprijs 2010 for Divan van Ghalib (Divan of Ghalib). In 2015 he published his fifth novel Alle collega’s dood (All Colleagues Dead) and his sixteenth book of poems Van groot belang (Of Great Importance). Translated poems have appeared in journals and anthologies in English, French, German, Chinese, Italian and other languages. A book of English translations (by David Colmer) has been published by Anvil Press Poetry in 2013 under the title Advance Payment. In 2014 an Italian translation of Divan van Ghalib has been published by La Camera Verde in 2015. The same book appear in 2016, in an English translation, again by David Colmer, as Divan of Ghalib, at White Pine Press. Nachoem M. Wijnberg is also Professor of Cultural Entrepreneurship and Management at the University of Amsterdam Business School.

Vincent W.J. van Gerven Oei is a philologist with a background in music composition, linguistics, conceptual art, and philosophy. He studied under Avital Ronell at the European Graduate School and Christopher Fynsk at the Centre for Modern Thought. Recent publications include Cross-Examinations (Gent: MER. Paper Kunsthalle, 2015), Allegory of the Cave Painting (Milan: Mousse, 2015; co-edited with Mihnea Mircan) and Lapidari, 3 vols. (Brooklyn: punctum books, 2015). As a translator, he has worked on Jean Daive, Alessandro De Francesco, Hervé Guibert, Dick Raaijmakers, Avital Ronell, and Nachoem Wijnberg, among others, and his writings have appeared in journals such as continent., Frakcija, nY, Parmentier, postmedieval, and Theory & Event. Besides his work for punctum books, Van Gerven Oei is director of the project bureau for the arts and humanities The Department of Eagles in Tirana, Albania and the multilingual publishing house Uitgeverij. He is also co-director of punctum books and founding editor of the journal Dotawo: A Journal of Nubian Studies.