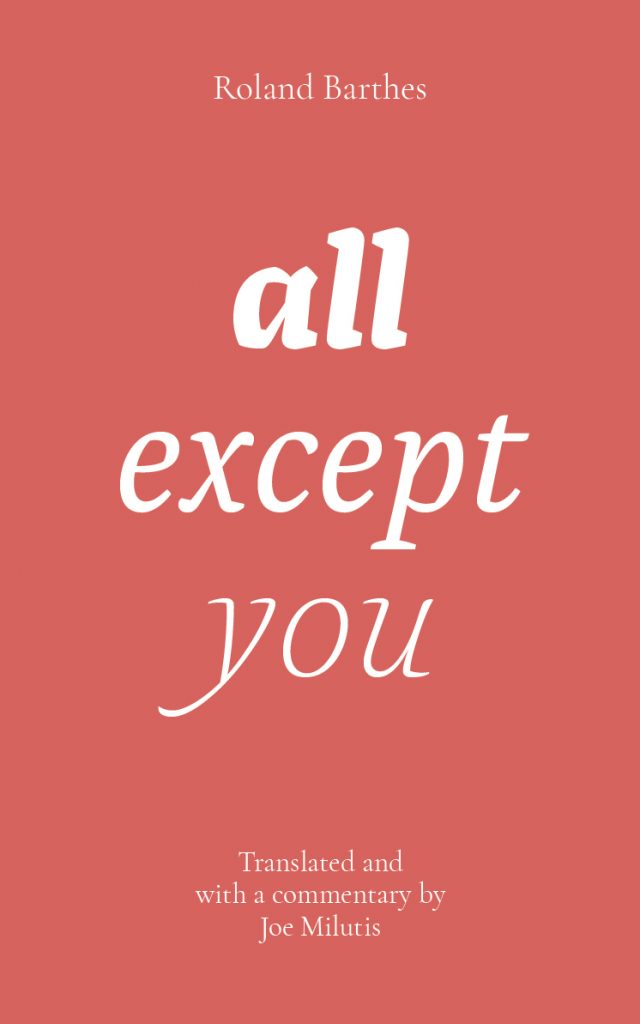 “I cover Steinberg with adjectives, which are like vibrations—multiple, rapid—that this lively oeuvre arouses in me.”

Roland Barthes’s consideration of the drawings of New York artist Saul Steinberg — originally an artist book posthumously published in France in 1983 — is historically important as one of the last remaining books in Barthes’s oeuvre to be translated into English. all except you continues Barthes’s inquiries into image–text relations, specifically the indiscernible horizon where writing meets drawing, one becoming the other. In his attempt to blur these registers, he produces less a critique than a translation, an attempt to merge author and artist, to see himself and his desire in the work of Steinberg, using the resources of structural linguistics and psychoanalysis. The impertinence of his critique mimics the deformations of a Steinberg drawing “sassy, deformed by the look on high, stretched, excessively crunched.” We become suspicious that Barthes is writing more into Steinberg than Steinberg holds, or even that Steinberg is an alibi for some other aim that is withheld.

Joe Milutis’s translation takes the opportunity of a running commentary, in the form of translator’s notes, to amplify Barthes’s impertinent reading and authorial one-upmanship by speculating on the presumed failures and detoured transferences of the text. Since Barthes is less concerned with writing about art than writing through it, Milutis’s “double session” perhaps provides the most faithful translation of the Barthesian eros in his write-through of the write-through.

Roland Barthes (1915–1980) was one of the most influential writers and theoreticians of the 20th century, expanding our notions of what constitutes a literary text and writing itself. He is the author of Mythologies, Writing Degree Zero, The Pleasure of the Text, and Camera Lucida.

Joe Milutis is a writer, media artist, and Associate Professor of Interdisciplinary Arts and the MFA in Creative Writing and Poetics at the University of Washington-Bothell. He is the author of Failure, A Writer’s Life (Zer0 Books, 2013) and Ether: The Nothing That Connects Everything (University of Minnesota Press, 2006).