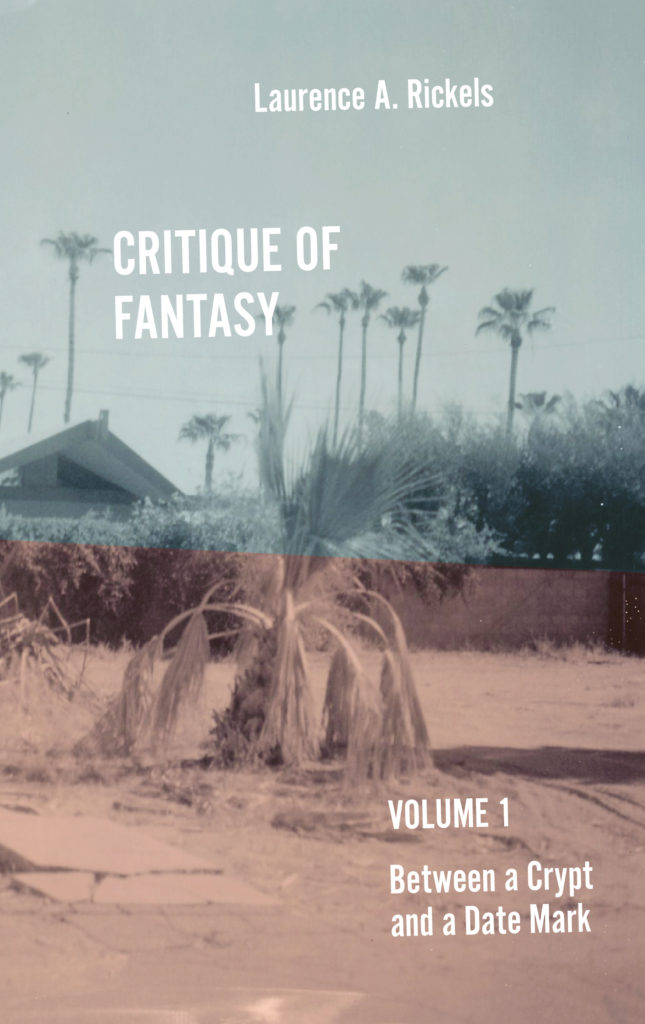 by Laurence A. Rickels

Critique of Fantasy, Vol. 1: Between a Crypt and a Datemark addresses both the style or genre of fantasy and the mental faculty, long the hot property of philosophical ethics. Freud passed it along in his 1907 essay on the poetics of daydreaming when he addressed omnipotent wish fantasy as the source and resource of the aspirations and resolutions of art, which, however, the artwork can never look back at or acknowledge. By grounding his genre in the one fantasy that is true, the Gospel, J.R.R. Tolkien obviated and made obvious the ethical mandate of fantasy’s restraining order.

With George Lucas’s Star Wars we entered the borderlands of the fantasy and science fiction genres, a zone resulting from and staggering a contest, which Tolkien inaugurated in the 1930s. The history of this contested borderland marks changes that arose in expectation of what the new media held in store, changes realized (but outside the box of what had been projected) upon the arrival of the unanticipated digital relation, which at last seemed to award the fantasy genre the contest prize.

Freud’s notion of the Zeitmarke (datemark), the indelible impress of the present moment that triggered the daydream that denies it, already introduced the import of fantasy’s historicization. Science fiction won a second prize that keeps it in the running. No longer bound to projecting the future, the former calling which in light of digitization it flunked, science fiction becomes allegorical and reading in the ruins of its failed predictions illuminates all the date marks and crypts hiding out in the borderlands it traverses with fantasy. To motivate the import of an evolving science fiction genre, Critique of Fantasy makes Gotthard Günther’s reflections in the 1950s on American science fiction – as heralding a new metaphysics and a new planetary going on interstellar civilization – a mainstay of its cultural anthropology with B-genres.

After thirty years teaching at the University of California, Santa Barbara, in 2011 Laurence A. Rickels accepted a professorship in art and theory at the Staatliche Akademie der Bildenden Künste, Karlsruhe and taught there as successor to Klaus Theweleit until 2017. During 2018 Rickels was Eberhard Berent Visiting Professor and Distinguished Writer at New York University, and he continues to offer seminars in media and philosophy at the European Graduate School (Saas Fee, Switzerland and Malta) where he holds the Sigmund Freud Chair. Rickels is the author of Aberrations of Mourning (Minnesota, 1988), The Case of California (Minnesota, 1991), The Vampire Lectures (Minnesota, 1999), Nazi Psychoanalysis (Minnesota, 2002), The Devil Notebooks (Minnesota, 2008), Ulrike Ottinger: The Autobiography of Art Cinema (Minnesota, 2008), I Think I Am: Philip K. Dick (Minnesota, 2010), SPECTRE (Anti-Oedipus, 2013), Germany: A Science Fiction (Anti-Oedipus, 2014), and The Psycho Records (Columbia, 2016).