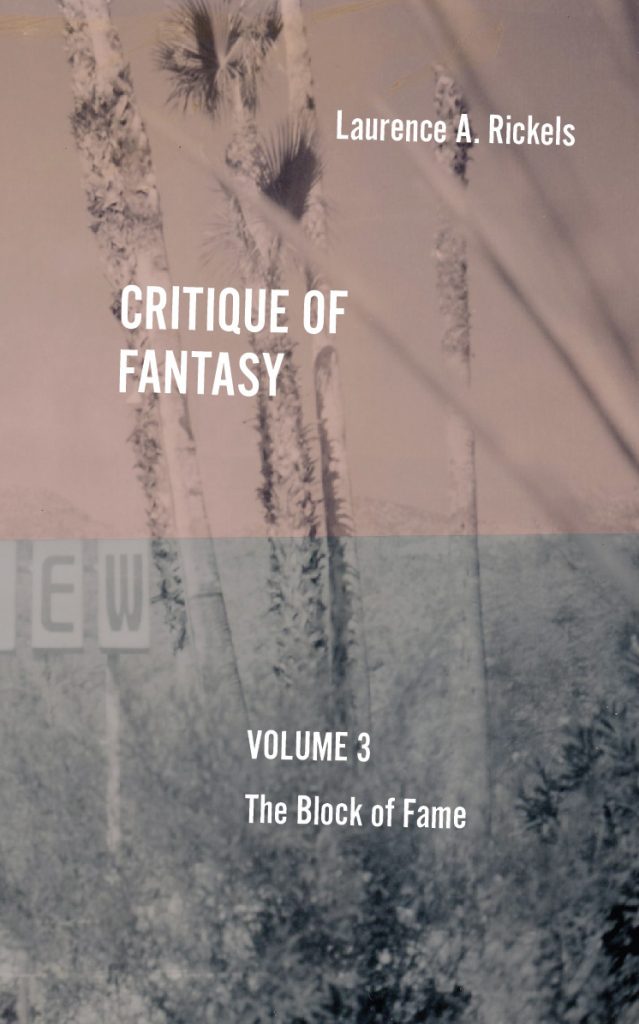 by Laurence A. Rickels

In The Block of Fame, Edmund Bergler, like the thirteenth fairy in the “Sleeping Beauty,“ uninvited because there wasn’t an extra place setting, crashes the psychoanalytic poetics of daydreaming with a curse. He charges that the overview, according to which art making rarefies daydreaming and delivers omnipotence, overlooks the underlying defense contract. We are hooked to creativity, because it offers the best defense against acknowledging the ultimate and untenable masochistic wish to be refused. Bergler’s bleak view, which Gilles Deleuze alone acknowledged in his study of Sacher-Masoch, doesn’t make any overall contribution to the aesthetics of fantasying that this critique addresses. However, it is a good fit with the centerpiece of the final volume: the wish for fame or, rather, the recoil of the wish in the wreckage that success brings.

Following the opening season of mourning and the experience of phantoms, there is the second death, which is murder. In addition to the deadening end that can only be postponed – the killing off of the dead until dead dead – there is another second death that concludes the wish for fame with a ritual stripping of badges and insignia. Not only are the medals thrown to the ground and the sword broken, but a life’s work passes review. At the close of his career, Freud returned to the environs of the wish, the cornerstone of his science. While his disciples Otto Rank and Hanns Sachs carried out his 1907 insights regarding the poetics of daydreaming to illuminate, respectively, the mythic origin of the hero and the evolution of art out of the mutual daydream, Freud battened down for the end of his world by revisiting the so-called primal fantasy, the myth of the primal father, in Moses and Monotheism. The animal setting that was a given of its premier articulation in Totem and Taboo was a wrap this time around with Freud’s translation of Marie Bonaparte’s transference gift, a memoir recounting her premature mourning for her sick chow and the dog’s recovery from cancer of the jaw.

In Bergler’s unconscious system, plagiarism is the conscious variation on the block basic to authorship. Theodor Adorno interpreted the ascendancy of the culture industry leading to and through the Third Reich in terms of the theft of modernism’s critical strategies for promoting the transformation of wish fantasy into the social relation of art. In the course of writing his essay “Notes on Kafka” between 1942 and 1952, Adorno was able to reclaim for aesthetic theory after Auschwitz the “constellation” that he and Benjamin had originally developed to outlast the culture industry’s depravation of the hopefulness of wishing. Adorno gives the sense or direction of the constellation’s recovery when he argues that Kafka’s work stages the final round of the contest between fantasy and science fiction by extrapolating doubling and déjà vu as the portals to a collective future.

The wish for fame or to be refused it and the wish to steal this book or undo the delinquency demarcate the final movement of the third volume, which follows out, beginning with Susan Sontag and Gidget, a veritable Bildungsroman of the post-war era’s star, the teenager. Fantasying to make it big time means to be in training for big ideas and big feelings. The romance of fantasying was also reconfigured out of a station break. The Nazi elevation of youth to superego in the Heimat of the Teen Age neutralized adolescent innovation by forgoing the Hamletian stage of metabolization of the death wish. Switching to the other patient, the other teenager at heart, no longer the German but now the American or Californian, this study enters the termination phase of the analysis in the environs of a reach for the stars that is legend. It is the legend to the final volume’s mapping of our second nature as daydreamer believers.

After thirty years teaching at the University of California, Santa Barbara, in 2011 Laurence A. Rickels accepted a professorship in art and theory at the Staatliche Akademie der Bildenden Künste, Karlsruhe and taught there as successor to Klaus Theweleit until 2017. During 2018 Rickels was Eberhard Berent Visiting Professor and Distinguished Writer at New York University, and he continues to offer seminars in media and philosophy at the European Graduate School (Saas Fee, Switzerland and Malta) where he holds the Sigmund Freud Chair. Rickels is the author of Aberrations of Mourning (Minnesota, 1988), The Case of California (Minnesota, 1991), The Vampire Lectures (Minnesota, 1999), Nazi Psychoanalysis (Minnesota, 2002), The Devil Notebooks (Minnesota, 2008), Ulrike Ottinger: The Autobiography of Art Cinema (Minnesota, 2008), I Think I Am: Philip K. Dick (Minnesota, 2010), SPECTRE (Anti-Oedipus, 2013), Germany: A Science Fiction (Anti-Oedipus, 2014), and The Psycho Records (Columbia, 2016).